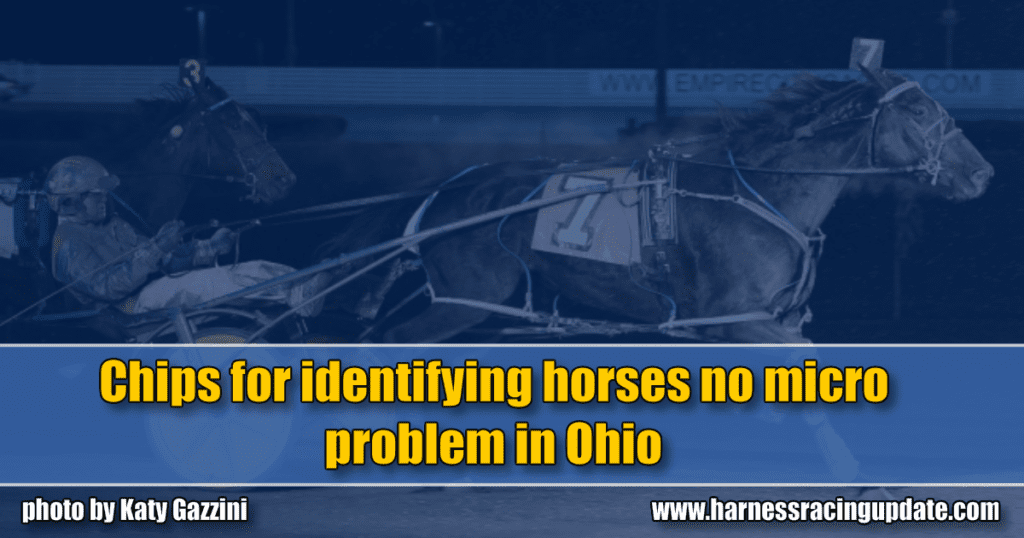 Chips for IDing horses no micro problem for USTA in Ohio

After microchipped pacing mare Bettor Joy N was scratched out of Monday’s $100,000 Chip Noble III Memorial at Miami Valley for not having a freeze brand it became clear the USTA and Ohio State Racing Commission are not on the same page about allowing microchips for equine identification.

United States Trotting Association (USTA) chief executive officer Mike Tanner said he doesn’t believe malice was at play when Ohio State Racing Commission (OSRC) officials scratched Bettor Joy N out of the $100,000 Chip Noble III Memorial on Monday (May 6) at Miami Valley Raceway for not having a freeze brand, even though the mare does have a microchip, which the USTA approved for identification purposes in March of 2018.

Tanner said he also doesn’t believe the OSRC is trying to make a point being the “only jurisdiction that has rejected the use of microchips as a means of identification.”

Rather, Tanner believes it’s a matter of, “bureaucratic issues and there was a decided lack of communication and, unfortunately, Better Joy N paid the price and I understand that another horse was scratched out of the paddock at Northfield Park a few nights ago in the same scenario.”

Aladin Du Dollar — who has a microchip but no tattoo — was scratched out of the 10th race at Northfield on Tuesday night by the horse identifier after receiving Lasix and warming up.

OSRC executive director Bill Crawford did not return a request for comment for this story.

Tanner said Bettor Joy N’s part-owner Richard Poillucci and trainer, Jimmy King, Jr., told him that the pacing mare had a New Zealand tattoo when it was imported from that country to the U.S. in December of 2018. Bettor Joy N (Bettor’s Delight—Joyfulbelle) received a microchip once in the U.S. and raced seven times outside of Ohio – earning $185,680 — without issue before being scratched last Monday at Miami Valley.

“They shipped into Ohio with another horse, with Shartin N, and the way that it was explained to me was that the horse arrived and nobody said anything to them. The horse was treated with Lasix, went out onto the track, warmed up and then after the ninth race they were told that we’ve got to scratch your horse because you don’t have a freeze brand,” Tanner said.

“Had they been notified when they first arrived, there would have been time to get a USTA tech out to apply a freeze brand. They would not have had to do DNA, because there was already DNA on the horse and we knew who it was. In certain instances in the past, non-microchip-related things have happened, when a horse is lacking a freeze brand. Normally, it takes 7 to 10 days, but if the DNA is already taken care of, we could have done it right then and there. We absolutely would have availed ourselves and made every effort to make sure the ID tech got there. I’m confident that that could have happened.

“The trainer also told me that had he known this, he could have taken care of it from his base in Delaware, simply by calling the USTA ID tech, with whom he’s had a relationship with for close to 40 years and they could have come out to the farm and taken care of it there.”

Tanner said the USTA was caught by surprise in the Bettor Joy N case, “because we thought it had been settled and the matter was fine going forward.”

Shortly after microchipping was approved as a means of identification was approved by the USTA 15 months ago, all state racing commission were alerted to the change in policy, which also includes a provision that all foals of 2019 and beyond are required to be microchipped and, starting in 2021, all standardbred horses competing at U.S. racetracks will be required to have a microchip, including those that were previously freeze branded.

Tanner said he became aware that there might be a problem in Ohio in March of this year when a horse with a microchip, but no freeze brand, was scratched. Tanner said USTA chief operating officer T.C. Lane then had conversations with Crawford, “and, to my knowledge, they went through the process again of explaining the microchip rule that we had introduced. We knew that there were some issues there, but we were led, getting off the phone, that it was nothing insurmountable and that everything was okay going forward.

“On April 2nd, we sent instructions to all of our identification techs that, when they are implanting a chip, they should ask the horse owner or the horse trainer if that horse was expected to race in Ohio anytime during the short term? If the answer was ‘yes’, our guys were also to ask if they wanted to freeze brand. If they said ‘yes’, just to be safe, we’d give that at no additional cost.”

Tanner said the USTA then reached out to Ohio Harness Horsemen’s Association (OHHA) executive director Renee Mancino and gave OHHA a database with all the known horses in Ohio that have microchips, but not freeze brands, “because we want to help them alert any horseman that might be in this situation.”

Tanner said he hopes microchips will be approved soon as an acceptable means of identification in Ohio.

“I talked to somebody close to the commission earlier this week and I’m led to believe that this problem could be rectified imminently. By the end of the month is my understanding of when that might happen,” Tanner said. “What I was told was… the ball started rolling on getting the rule changed in October last year and somewhere along the lines in following the procedure that needs to be followed in Ohio, it got bogged down. I don’t know why and I’m not looking to point fingers or anything like that, but I think the intent is there to get microchips approved.

“There was a rule approved by resolution and went on to the next step of the process, I believe in November. I think the racing commission is doing what they need to do, but something just got screwed up along the way and, as I mentioned before, the communication broke down and was poor.”

Tanner said the USTA approved microchips as a viable means of identification almost 10 years ago, “but we didn’t have the sense that the industry was necessarily ready to embrace it. In the past two years, we decided we were going to push forward with it.

“It’s funny. From all the criticism I’ve seen on this through social media, there was one on Twitter the other night that said, ‘It looks like the USTA should have been more deliberate and taken their time instead of rushing this through. I’ve been in this chair for 10 years and that’s the first time I’ve ever had anyone criticize the USTA for moving too quickly…. I looked at that and said, ‘Boy, that’s a new one.’”

“It’s ideal for young and pregnant stock. It makes preventative care easier. It puts us more in harmony with international racing,” Tanner said. “Even in this country, the thoroughbreds kind of beat us to the punch by a year in terms of the introduction regarding chips. And because our chips are bio-thermal it allows the caretaker of the horse to monitor temperature during and after surgery and other procedures. It’s less invasive for the horse and there’s also the aesthetic part of it. I don’t think I had a year go by without five or six people calling to say that (freeze branding or tattoos are) ugly or, ‘I don’t want to do this to my horse.’”
Mostly importantly, Tanner said microchips provide the most accurate form of identification.

“It’s important for the bettors to know that if we present a horse as being a certain horse that it is that horse,” he said. “For the horsemen, we wanted to give them enough time so that they could switch over and make their plans. There have been questions about it, as with anything new, but, by and large, this has gone swimmingly. It’s been very, very smooth and it’s been well-received.”