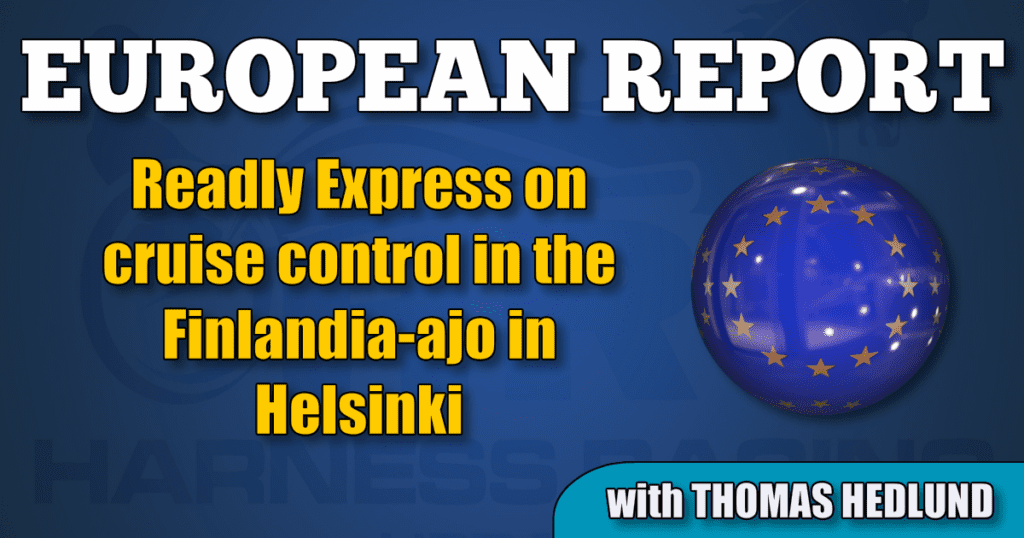 Readly Express on cruise control in the Finlandia-ajo in Helsinki

Timo Nurmos’ Prix d’Amérique winner from 2018 came to Helsinki after a shorter break since the victory in Criterium de Vitesse over the mile in French Cagnes-sur-Mer and it was most certainly with relief that Nurmos saw his 7-year-old Ready Cash son jog to a safe win from front position.

The race itself was undramatic. Readly Express easily got to the lead after 550 meters and early leader Next Direction (Orlando Vici) had no interest in defending that position when Björn Goop made his offensive move for the lead with Readly Express.

A quick finish put all the antagonists in checkmate and Readly Express came home in 1:53.2, with plenty of power in the reigns.

Finnish hope Next Direction was a positive runner up after a pocket trip and the bronze medal went to Chief Orlando.

The duo will have their next gathering at Solvalla on May 26 in the Elitloppet.

Volstead (Cantab Hall—Madame Volo) is sold and will return to his birth country. Stefan Melander has trained the 8-year-old son of Cantab Hall during the career in Sweden. Sulkysport is reporting Volstead will stand somewhere in the United States beginning in 2020. Negotiations are ongoing with several farms to determine where Volstead will stand.