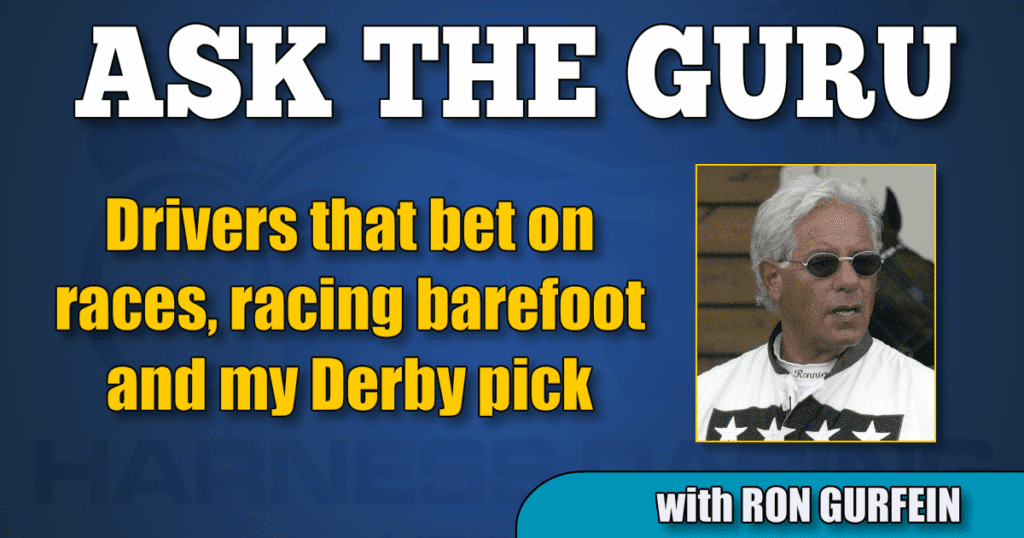 Drivers that bet on races, racing barefoot and my Derby pick

All that, and more, in this week’s edition of harness racing’s most popular advice column.

Tidbits: I loved the way Atlanta looked in the qualifier Saturday morning at the Meadowlands sans trotting hopples. Yannick Gingras gunned her into the first turn and she couldn’t have looked any safer. I truly think trotting hopples slow a horse down, especially in the latter stages of a race Without them she could be amazing.

Unfortunately, I cannot give the same praise for what I have always considered the fastest trotter I have ever seen. Greenshoe was fabulous once he left the gate, but the “White Knight” Brian Sears was in a world of trouble keeping the colt’s head on straight behind the gate where he proved to be a bundle of nerves.

I don’t like to second guess trainers, but as fast a colt as he is — and how slow the gate leaves at the Meadowlands — if his mind is too brittle to accept the stop and go, why not feed him in late? I love the way he sat in a hole for a bit, but I think if he was as comfortable as I thought, Sears would have stayed put a lot longer. They were certainly going fast enough.

After watching the horses that came from Sunshine Meadows perform in the qualifiers, I am convinced that the track there is short. I know it’s not fast and I watched some of the 3-year-olds go comfortable miles in 1:56, which would translate to 1:51 or 1:52 at the Meadowlands. Unless they were sick or under orders to race the first qualifier very easy, I am perplexed by what I witnessed.

Due to the late scratch of Omaha Beach due to an entrapped epiglottis I will go with my close second choice, Game Winner, to become Bob Baffert’s sixth winner in the Kentucky Derby.

For your reading pleasure, I have a historical novel that I loved. Beneath A Scarlet Sky by Mark Sullivan. Based on a true story, Pino Lella, a normal teenager in love with food and girls, is sent away to a Catholic school in the Alps when the bombs start falling in Milan in 1943. He is a character you will immediately fall in love with. He survives impossible situations and has the heart of a lion. The book took an amazing amount of research and is very well written.

Dan Roland asks: (I have shortened a long question) When training 2-year-old trotters, what are the most important and controllable things to focus on to give a trainer the most chance of success?

A colt must be comfortable. Don’t ever jam one into equipment. Bridle, girth, headcheck must all be loose fitting. Make sure that if there is any interference you address it immediately. It is especially dangerous when they touch somewhere at a jog. This can erupt in a myriad of bad habits and literally ruin a colt if not corrected in a short period of time. I find that if you start out with a colt barefoot behind and a reverse flat shoe in front with short toes all around the only place he will hit would be to scalp his hind feet. This is easily remedied by putting a pair of pacing scalpers on behind. I like pacing scalpers better than the trotting version as the tend to stay on better.

Don’t over-train or over jog. The new version of the trotting horse is more like a thoroughbred and doesn’t need to jog more than three miles a day, four is okay, but more than that is counterproductive. There is no necessity to train twice a week. I find giving three or four days off between training sessions is very good.

Diversify your training, it will keep your horses happier than the dull two trips at a mile all the time. Do some interval training, do some longer distance training and make sure that your horses finish their assignments on the bit, never a loose line going to the wire, they will have enough of that when the catch drivers start their jobs. Don’t teach your colt to go slow. Once they have reached the 2:25 mark, don’t be going first trips in pedestrian fashion. A colt should never go the right way of the track slower than the low 2:30s. I hate to see first trips in 2:50, that’s great in November.

Check temperatures every morning and tendons and suspensories after work.

You can buy a laser digital thermometer for around $30. Check the colt’s joint temperatures once a week. I have avoided many catastrophes but finding a HOT joint and addressing the situation immediately.

Horses must go straight, I am not a fan of head poles early on, but a Murphy blind will usually do the trick.

Make sure you get to the blacksmith often enough (2-3 weeks) to not let toe length get out of hand.

Keep an eye on blood counts and blood enzymes and treat the blood to keep the numbers in proper range.

I find I could go on with this for hours, so I am calling it quits now. Just remember less is always better.

To begin with, the horses that race in Europe and are in the limelight are much older and more race hardened than the 2- and 3-year-olds we concentrate on in America.

There are also many track surfaces on the continent that are barefoot friendly, whereas in our country there are very few. A track like Vincennes in Paris is a velvet path with wide sweeping turns that accommodate many barefoot trotters. The only tracks in the U.S. that would even be close to Paris would be the Red Mile and often the Meadowlands. I personally have raced horses barefoot on most tracks here and in Canada. I even broke the track record in Maywood (half-miler) with a colt named Gallantly in the Galt. He was by Varenne and his dad raced barefoot for most of his career. I am afraid to advise doing it with 2-year-old as I had one founder as a result and have never tried again.

The reason most trainers don’t do it is because they are afraid. If you aren’t sure in what you are doing it becomes a problem.

The reason why this is hard to implement on the program is that it is usually a game time decision. Not something planned when you put the horse in the box. A sharp trainer wants to see the track condition first hand before deciding to pull shoes.

I will say that most tracks do announce the fact when you inform the equipment checker.

As far as pacers are concerned, I have seen a few barefoot but the reasoning is not there. Taking the weight of the shoe off a trotter will make him go faster if he can trot that way. Pacers today are shod like thoroughbreds. The blacksmith cuts the feet to the blood and slaps on four aluminum shoes. Therefore, you really gain little if any advantage because the weight loss is so minimal (about 3 ounces).

Steve Putnam asks: I wonder what your views are about drivers betting. I have heard that in certain quarters drivers bet often and bet big. Too bad we don’t have an integrity rule and no drivers are allowed to bet.

I am not thrilled by the question because you seem to be insinuating evil. The reason I am answering is because I would like to set you straight.

When I started training almost 60 years ago, the money we raced for was minimal and more drivers and trainers bet on horses to supplement their income. I am not talking cheating. Honest gambling was prevalent because on the inside we knew more than the people on the outside whose money made up the majority of the pools. Were there cheaters? For sure there were, but by far the majority of bets that were placed by the trainers and drivers were honest calculated risks. The horse was locked in last week with a ton of pace, or my colt had a lot of mucous pouring from his nose last week, etc. These type of situations provide reason to make a wager.

Today it’s a totally different story. Even though many tracks have installed betting machines in the paddocks, the amount of money bet by the drivers today I would guess was less than 10 per cent of what it was in 1960. The top drivers at most major tracks are all millionaires. Do you think they would give up the goose that laid the golden egg to cash a bet? The thought is unfathomable. Take note that if any of these drivers are betting, it’s for entertainment not because they need it to feed their family. People like to stir the pot. I get emails of “bad races” my readers want me to watch all the time. Almost always I see nothing wrong at all. If you have never sat behind a horse going 30 or almost 40 mph you are not entitled to a legitimate opinion because split second decisions pass you by in a heartbeat.

Thanks to all my readers for the kind words. We are just a few weeks away from the beginning of the baby races across the country, which, to me, is the most exciting time of the year. Please keep the questions coming. Hopefully I will have my first Road To The Hambletonian ready soon. Have a wonderful week.