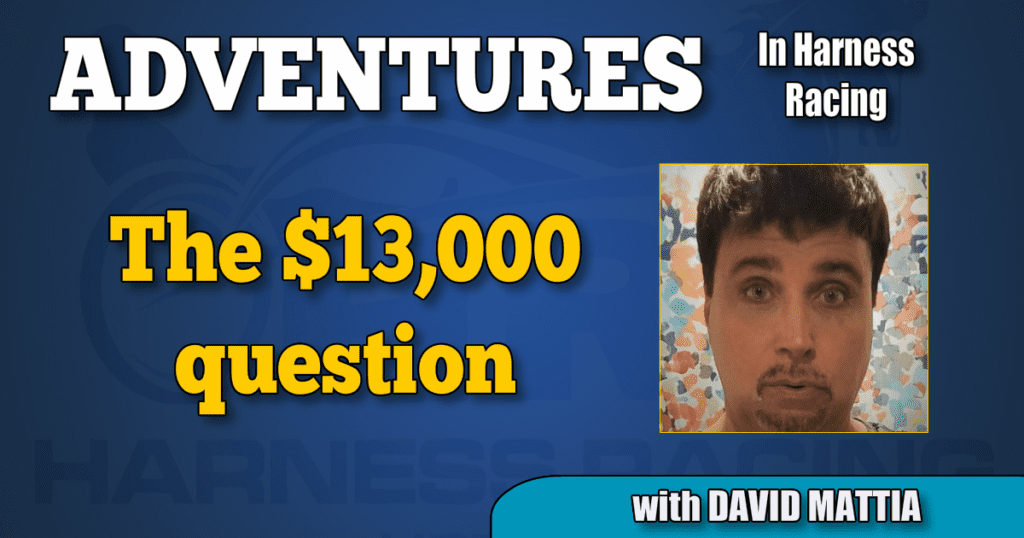 The story of what happened when a young trainer received life-changing advice from owner Irwin Lampert.

In the mid-1990s, I received two unexpected gifts in one month.

The first came in the form of a check I received from a lawyer in Central City, CO. An uncle I disliked had died and left me the tidy sum of $13,000 in his will. Not only did I dislike the guy, I barely knew him. Wait, did I just say that I barely knew him and that I disliked him? I meant to say that he was a very kind and generous man, and even today, whenever I think of great men, I always rank uncle… er… what’s his name… as my favorite.

The second gift arrived at my barn door in the form of a middle-aged gentleman named Irwin Lampert. Irwin is a Wall Street attorney known throughout the trotting industry as a man who likes to buy well-bred trotters.

Upon introduction, and after some brief pleasantries, I instantly knew that Irwin was the real deal and that he was a genuinely classy guy. He had a stylishly understated car, his wife Judy was perhaps one of the most beautiful and gracious women I have ever had the pleasure to know, he owned some really nice trotters, his smile was as genuine as mine – a good sign – and he lived in a sprawling mansion a few houses away from Richard Nixon. His street address notwithstanding, I instantly determined that Irwin’s character was unimpeachable.

Irwin told me that he looked me up because he heard a lot of good things about me. Since I couldn’t, and still can’t, think of too many people who would have told him that, I politely accepted when Irwin offered to give me two of his horses to train. There was a third, but I had to pick her up after her Sire Stake race which was coming up in a few days. Before long there would be a fourth and a fifth.

Throughout the spring and summer, Irwin and I got along very well and I loved training for him. He came to the barn at least three days a week, and when he wasn’t on the phone with his stock broker or reading the Wall Street Journal with his spectacles down on his nose like Chuck Schumer, he would often jog his own horses. I thought it was great because most of the time I felt as though I was being paid to work with him rather than for him.

Yes, sometimes, I thought he jogged just a little too fast, but when his one-eyed Baltic Speed filly, Dianalu Hanover, ran away from a field of some really nice fillies at Yonkers, I decided that brisk jogging might not be such a bad idea in her case. Hey, it’s what that filly wanted to do, but I wouldn’t let her. I figured, as long as she didn’t crash into fences and walls like another Baltic Speed filly I’d trained the previous year, Irwin — who also held an A driving license — pretty much knew how to do the right thing on the track. It was a perfect situation, and within a few months, my relationship with Irwin Lampert had developed into a kind of Will Robinson and Dr. Smith kinship.

One day, while we were sitting on a tack trunk with our lunch, Irwin said to me, “How much money do you have that you can afford to blow?” Without the slightest hesitation, I said, “Not a cent.” Irwin scoffed at my instant dismissal and asked me again. “No, I’m serious. How much money can you afford to put out without getting mad at me if you lost it?” I sat there and thought about my finances and the expenses of running the barn versus what I had in my checking account and the few bucks I could scrape up here and there, but I was young and careless with money. I had no mind for business and I truly didn’t have any ready cash to burn. When Irwin asked me a third time, my heart sank. Was it possible that this wonderful man for whom I’d developed a great fondness turning out to be a shady scammer like all the rest of them? Had I been fooled all along? Why did he want my money?

Anyone who knows me long enough, will tell you that I have trained horses for some of the biggest jerks in all of harness racing and that each of them started out as really nice people. Over the years, I have accumulated my indisputable list of mega-jerks and non-jerks. If your name isn’t David Scharf or anyone associated with him on the non-jerk list, odds are you’re either obscure or dead or you’ve been exiled to the mega-jerk list of people for whom I have trained horses, and I have chosen to forget you. Onto which list was Irwin’s name going to be inscribed? I wondered.

By the end of the day, as Irwin was packing up his training suit and helmet, he said, “Friday night I want to go over to Yonkers and claim a horse for you. Her name is Katy Coleman.” I agreed that she was a good claim and I was happy to get her. Then, after he’d left the barn, a spark went off in my head. I remembered about the $13,000 windfall. How could I have forgotten that? I’d given the check to my older brother to put into some kind of mutual fund or something because that’s the kind of thing he knows how to do. I didn’t care about that money because I’d completely forgotten about it. In fact, if it had been a cash gift, I would have, in all probability, blown it all on a trip to Tahiti or something.

I wildly chased Irwin to the parking area before he could drive away. As I ran, I remember thinking, “Irwin’s a good man. He’s not a jerk. He’s not a scammer. He wants me to be his partner on Katy Coleman.”

When Irwin rolled down his window, I said breathlessly, “I have $13,000 in my brother’s brokerage account. My uncle died and left it to me and… and…” Irwin just nodded and said, “Good, I’m glad to hear it.” Gee, he seemed awfully nonchalant about my $13,000. Then, as he slowly drove away, he said, “You’re a good kid and I want to make you wealthy.” For a moment, I just stood there and thought, “Wealthy? How’s he going to make me wealthy with a fifteen claimer?”

A few days later, Irwin came to the barn with his Wall Street Journal. He asked me to sit next to him. He pointed to a page of stocks and stock prices which, to me, looked like Egyptian hieroglyphics.

“You see this stock here,” he said. This is the one I want you to buy and I’ll show you how to do it.” I replied, “You mean that this has nothing to do with Katy Coleman?” Irwin laughed and said, “Katy Coleman? Of course not. You’re not going to get wealthy with a fifteen claimer.”

For a moment, I was eager, but by then I’d had a few days to think about the $13,000, and I was having second thoughts about spending it on anything, least of all the stock market. I knew nothing about it. I said, “Well, maybe I’ll invest four or five thousand.” Irwin, strictly business this time, said, “No, listen to me, put the whole thing into this. I will tell you when to get in and when to get out. Trust me.”

That evening I called my brother and told him that I needed my $13,000. He asked me why. I said that I was going to buy a stock.

“Who told you about this stock?” he asked.

“A guy I know in harness racing,” I replied.

“Everyone in harness racing is a loser,” he said.

“But he’s a big shot lawyer. He has a law firm on Wall Street,” I replied.

“Wall Street lawyers are all crooks.” he said.

“But… But he lives in a mansion next door to Richard Nixon,” I said.

“Richard Nixon was a crook too,” he replied.

“No, you need to start saving money and think about your future and retirement,” he said.

Yeah, I know how fast 40 years go by. It takes 40 freaking years! I hung up and called my father.

My father’s yawning response was, “If I had a dollar for every stock tip I’ve gotten in my life…etc…etc…etc.”

So, I surrendered, and Irwin was very disappointed. I don’t know if he was disappointed with me or for me. I guess you can figure out the rest of the story, but please allow me to make you more aggravated than I am at this moment, despite the fact that 23 years have passed.

The stock in question went up to well over $300 per share within a few months, and then it split a gazillion times. If I had followed Irwin’s instructions, my $13,000 would have turned into over $7.5 million – which is exactly when Irwin, and a whole lot of other people sold out. Who knows? Maybe that kind of wealth would have been bad for me, but I don’t think so.

So, how do you end a story like this? I could tell you that my brother was happy to give me $3,600 which was what my mutual fund was worth after September 11, 2001. Are you ticked off yet? I have a friend in racing who knows all about this story and when he tells it, he says, “Dave’s family treats him like one of the Kennedys – not JFK – the other one – the one who got the lobotomy.”