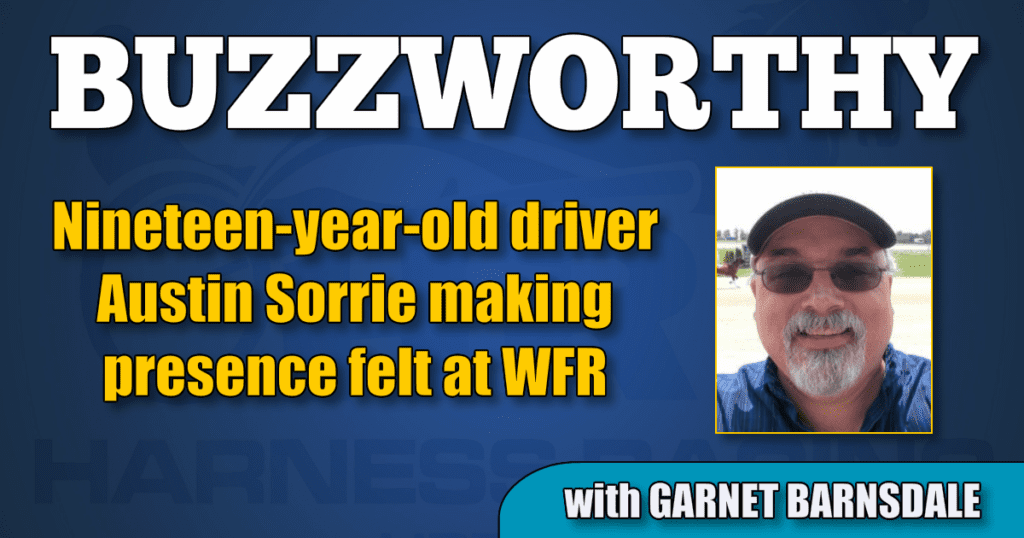 Could 19-year-old driver/trainer Austin Sorrie be the next breakout driving star in Canada, hot on the heels of Louis Phillipe-Roy? Judging by the buzz he’s causing in the short time he’s driven at The Raceway at Western Fair District since shipping west from the Maritimes, I wouldn’t bet against it.

“Since the time I could walk, I was always at the barn,” the soft-spoken teenager Sorrie said, and he has been a winner right from the start, incredibly winning Pinette Raceway’s signature race when only 14 years of age. Sorrie drove the Goliath Bayama mare Onehotvett to a scorching 1:57.2 victory in The Kilted Race over the half-mile oval that is located about an hour east of Charlottetown.

Sorrie had a breakout year down east in 2018, taking 32 wins, and The Raceway’s Announcer, Sugar Doyle, notes that Sorrie’s reputation proceeded his arrival in Ontario. “Austin came to Ontario with some hype.” he said. “Becoming the winningest rookie driver in the history of PEI harness racing was a big deal. There’s been some big name drivers come from the island over the years, so I think he’s doing a great job of living up to the hype so far.”

So why move west at such a young age when enjoying so much success? “You can’t make much money down east racing horses,” Sorrie said. “I knew I’d have to leave if I wanted to do it.” Sorrie has driven 10 winner in 78 starts so far in 2019, which is good for a respectable 13 per cent win average driving at a track which has perhaps the most aggressive pilots in the country.

“It’s way different up here; they’re rolling all the time,” he said. “There are no cheap fractions here or there; they’re going all the time. You gotta be out quick, because if you’re not, you get caught in quick.” Sorrie said there is one conditioner in particular that has shown confidence in him at the London, ON oval. He said he is very thankful to trainer Patrick Shepherd for giving him a shot driving some of his horses.

Doyle said that from his perch atop the grandstand in his announcer’s booth — known as “Sugar Shack” — he sees a young teamster that is fitting in well. “I think he’s a great fit for any track, anywhere,” Doyle said. “We’re very happy to have him in London. It’s a tough driver colony here — nothing comes easy. I’m sure he’s learned lots already driving in Ontario vs. driving back east.”

Sorrie said he enjoys both training and driving for reasons that make perfect sense. “When you go to the races with one that you’re training, you know what you have,” he said. “When you jump on someone else’s horse, you’re not sure if they are trained up this week and ready to go or if they are going to be short this week.”

Sorrie has two of his own in Ontario that he trains — Dustylanesam and JJ Powerball — the former of which has been racing at Mohawk Park, but he says he has to wait to team one over the 7/8ths of a mile on the country’s signature racetrack. “I have a “B” licence and you have to drive for one full year to get your “A”,’ he explains. With that year set to expire in three months, keep your eye out for the Maritime sensation this summer at Mohawk Park.