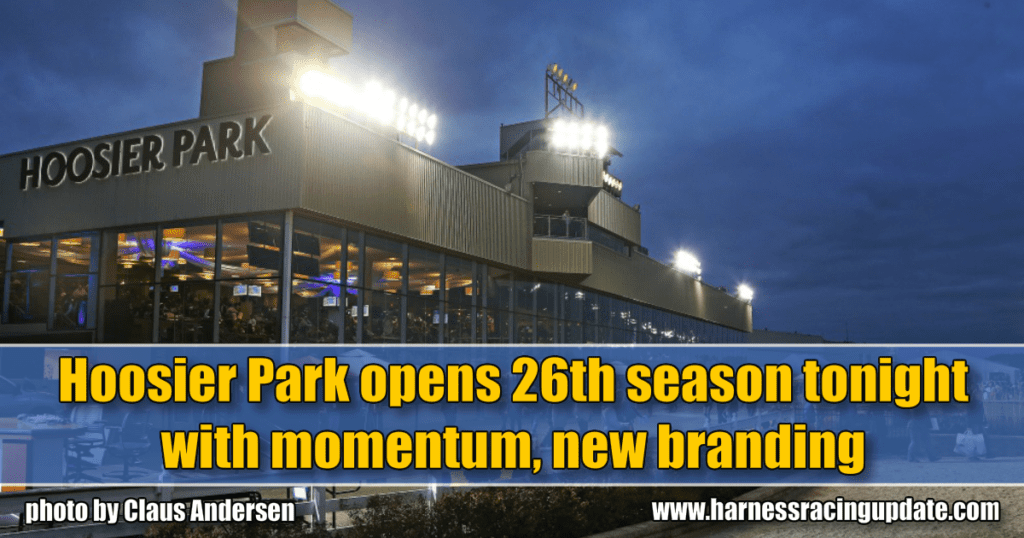 The Anderson, IN track has a strong commitment from local horsepeople as it kicks off its first full year under the ownership of Caesars Entertainment and under the new name Harrah’s Hoosier Park.

The 2019 harness racing campaign in Indiana will commence this evening as Hoosier Park kicks off its 26th season. The Anderson facility starts its next quarter century with Caesars Entertainment at the helm, rebranded as Harrah’s Hoosier Park. The Las Vegas-based operator took control of Hoosier Park and thoroughbred counterpart Indiana Grand last summer with race meetings already underway. The 2019 meeting, slated for 160 days, marks the first with the full influence of the Caesars Empire.

“We’ve rebranded our property to a Harrah’s branded property. We now have Caesars Rewards in place, where last year we were just trying to transition those things,” said Trent McIntosh, Harrah’s Hoosier Park’s senior vice-president and general manager. “I think you’ll now get the new look and feel of the product when you walk onto the property. You’ll get the full Caesars Rewards program, just as any other guest within Caesars Entertainment and the worldwide network.”

McIntosh, who brings more than two decades of racing and gaming management to Harrah’s Hoosier Park, said the transition from previous owner Centaur Gaming has gone very well. The biggest surprise he found is in how well racing and gaming were integrated, something you do not always see in other facilities.

“I think what caught my eye when I walked on both of these properties, is how well maintained and how well managed they were; how they were integrated with the casino side of the business so well,” he said. “Meaning, it doesn’t matter what your role is on this property, you’re proud of horse racing and you’re part of it in some way. That’s very hard to replicate, and they had done a very nice job of it. From a racing person’s point of view, it was amazing, actually.”

Now, the challenge for Caesars Entertainment is to improve on a venue and a product that was already established as one of the best in racing. Harrah’s Hoosier Park received glowing reviews in 2017 after playing host to the Breeders Crown. McIntosh says the goal is to build on past successes and continue moving forward. This year’s promotional theme for racing reflects that: Bigger. Better. Bolder.

“Indiana, I believe, has two of the marquee racing products that Caesars owns in Hoosier Park and Indiana Grand,” he said. “I think this is our opportunity to show the racing world that we care about racing and that we can continue to improve products that we’re already proud of.”

One of the areas of improvement for racing fans is the implementation of the Caesars Rewards program. Whether a patron is playing in the casino or wagering on the races, they will be able to accumulate valuable points that can be redeemed at Hoosier Park or one of 46 other Caesars properties, making them worldwide rewards, and enhancing the experience.

“There are benefits to the program, and there are benefits outside our building for that customer. It is a new amenity for them. For a racing customer, they’ve never had that opportunity before,” said McIntosh. “I think the more people we expose to Caesars Rewards on the racing side of the business, the more experiential this property becomes for them.”

Another new amenity is the Laurel Lounge – located within the casino – that will be available to top casino and racing players. The VIP lounge cost $1.7 million to build and will open April 2. Caesars offers these lounges, previously known as Diamond Lounges prior to a recent rebranding, as places where guests can enjoy an elevated level of service.

“I think, as a company, we’re trying to do a better job of creating some synergy around having Caesars Entertainment as a parent company. The Caesars Rewards and Laurel Lounge images are going to be blasted everywhere,” McIntosh said. “That’s just the beginning, and I think horse racing is going to be doing some of the same things and utilizing some of the same tools to try to tie our racing products together.”

One way the company will tie racing products together is through a multi-outlet handicapping challenge slated for this summer. The tournament, which will offer a $35,000 cash prize, will be conducted at the company’s five racetracks as well as the off-track betting locations. The challenge will give contestants a chance to handicap 12 races between Caesars-owned standardbred and thoroughbred tracks. It is a new venture from Caesars, and McIntosh sees it as a way to promote all venues.

“It’s our first try at something like this, and we’re trying to make a splash in the handicapping tournament world. I think it’s an interesting concept,” he said. “You’ve got one tournament and you get to pick what races you wager on. I think it will be a cool thing. Something new, and really new to the industry. Being able to host this at eight locations around the country. I think it’s pretty interesting, and we’ll test the waters this year.”

The changes and initiatives in place will help support a racing program that has garnered strong support from horsepeople over the two-program opening weekend. A total of 168 horses dropped in the box for tonight’s 14-race card, with another 140 entries drawn for 14 races Saturday night. Last season, Harrah’s Hoosier Park kicked off the 2018 campaign with programs offering 13 and 12 races, respectively.

Rick Moore, vice-president and general manager of racing, said he is excited to get the season underway. This is his 22nd opening night overseeing harness racing at Harrah’s Hoosier Park. He is a big believer in momentum, and sees the response at the entry box as a good sign.

“The response to the entry box has been more than I anticipated. I think that bodes well for getting started,” he said. “You get off to a good start and you pick up energy quickly. I’m proud of what we do here, and the horses we have here. We’re prepared to get off to a great start.”

In September 2017, a U.S. District Court ruled that Indiana’s rule preventing newly claimed horses from leaving the state for 60 days to be unconstitutional. As a result, last year it was open season at Hoosier Park, with many horses plucked out of claimers to immediately race elsewhere. On March 12, the Indiana Horse Racing Commission approved a rule that will prevent this occurrence, and will go back to a 60-day waiting period before a horse can leave the state.

Any time a change in ownership takes place, it can create uncertainty. Through the actions of the last eight months, Caesars Entertainment has shown it is willing to embrace racing and move it forward. Bigger. Better. Bolder.

“We’ve done a lot of things in the first eight months we’ve been here, from rebranding the property to building the lounge to launching Caesars Rewards and some of the exciting new things we’ve talked about,” McIntosh said. “These people are passionate about horse racing and putting on a good show, and I’m excited to be a part of it, for sure.”