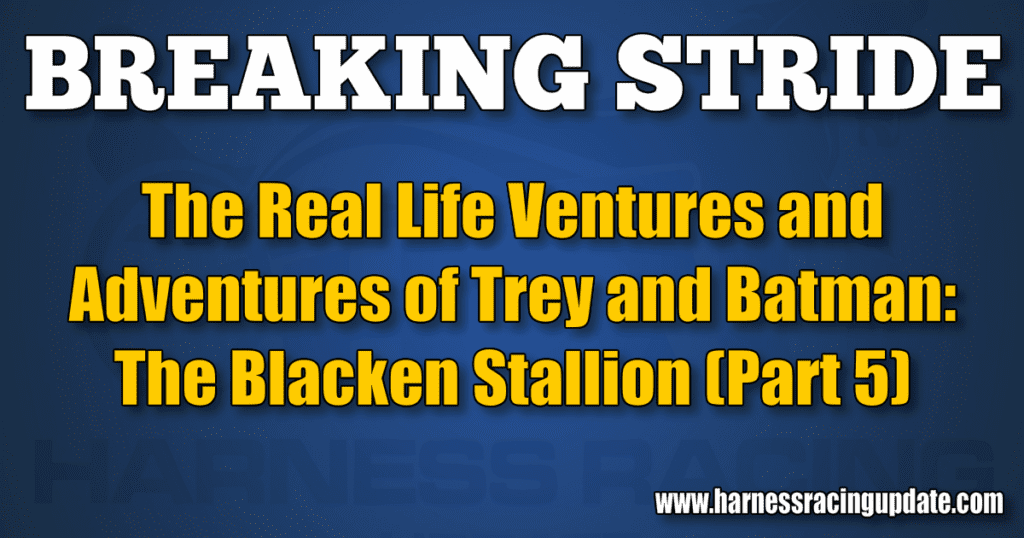 After the scuffle, the chauffeur would need Uber.

We sat in a back booth of the Pour Judgement Bar and Grill. My friend from the high tech world, a man of wealth and fame, remained neat, trim and clearheaded. I was at the corner of mellow and blotto streets. Since polishing off our chicken club sandwiches, he refilled with lemonade; my second pour was another Zombie Apocalypse with a Twist.

My elbows were resting on the worn wooden table, my chin was propped on my fists, and my grammar was fading. I said, “I got this mental thing, it ain’t good, doing stuff the easy way ain’t for me. Screwing up in my own personal style is more fun than doing it like everybody else.”

He said nothing, just smiled the wry smile of the sober looking on the not so sober.

“But not everybody’s stupid different. Like I know damn well that I should breed my mare with a top trotting stallion and that it should already be a done deal. I know that breeding fees are the cheapest part of the horse breeding business procedure. I know the odds are better to get a good racehorse if you go with a proven stallion in a game that is a HUGE longshot to begin with.”

He flashed me a ‘lower the volume signal’ that looked like he was patting the heads of twin puppies.

“I know absolutely, positively, that breeding to a big dog is the only way to get a decent price on a yearling horse. So why do I feel like going the wrong way?”

He finally stopped my stupidity train, “Maybe by taking the long, hard road, you have a built-in excuse if you don’t get there.”

Exaggerated hand movements are a sign I have been overserved. I clapped wildly and said, “Bravo, very profound.”

He tipped a lemonade glass salute.

I mumbled on, “My coach says bat lefty, I gotta bat righty. My counselor says study business. I study history. My boss says wear a tie, it ain’t happening. My wives say almost anything, red lights flash. I don’t make big scenes; it’s just like a long string of min-revolutions in my mind.”

“Everybody has those feelings. A little revolutionary thinking is okay. But even revolutionaries need to moderate themselves.”

The room felt a tad warm so I sighed and pulled my Moody Blues Live 2001 sweatshirt over my head. Then I carefully draped the heirloom on the napkin holder so I would not forget to take it home. I asked, “Did you look over the three stallions on the list?”

He nodded and counted down on his fingers, “Enterprise, Whataworkout, and Prestidigitator. I’m a rookie in your sport, but my choice was fairly clear.”

My hands went up as if I just kicked a field goal. I kept them up and said, “Yes, one of the stallions is obvious. So why did I spend the last two nights trying to make a case for the NOT obvious choices. I’m always trying to find a reason to put my foot in a shoe that doesn’t fit.”

I was quiet for a few seconds and then spoke slowly, “I think I want to prove a point. I have this weird idea that if any of these three stallions got a full book, they might be famous. It irritates me that they will never get that chance. Even if they do turn out a great horse, the buyers will just think it was a fluke.”

My nonsense did not inspire him. He spoke to me as if I was an idiot, “Well, I’m sure there are solid genetic and economic reasons for top stallions being where they are in your sport.”

I continued to whine like a five-year-old, “It’s like Beau Blacken, the baseball player I met. Who knows, Beau coulda been a contender. Heck, just this morning I read ads for more new stallions that I never heard of — Helpisontheway, Stonebridge Tonic, Crescent Fashion, and Pine Credit. Who’s to say they couldn’t be great? Why don’t they get a real shot?”

Even with my senses impaired, it was easy to sense he had enough of my whining. His voice turned serious, “Listen, I’ve spent years green-lighting films and television series. The stars are the stars for a reason; they have talent and they are valuable for business reasons. It certainly isn’t fair, but for every actor, director, and scriptwriter that gets work, makes serious money and whose name you recognize, there are literally thousands who could do the same job, maybe a better job, but will never get the chance. That’s just reality.”

“No buts, there will always be hierarchies. Get over it. My dealings were with human beings who left the stage with broken hearts. You’re wasting your time, money and effort worrying about fairness regarding LIVESTOCK in a very small sport. Just pick the smartest choice of these three. Close a deal. Move on and don’t waste my time. Don’t be a heroic lone wolf or you will be roadkill.”

This felt like he threw his lemonade in my face. I placed a hand on my heart, leaned back and said, “Batman, that’s the first time you called bullshit on me.”

He quickly put his little outburst in his rearview mirror. He smiled in his normal tone said, “Trey, you’re a sporting hobbyist with one nice broodmare. You can do what you want, you can pick who you want, and you can breed your mare to a llama named Mister Fuzzball if you want. But if you go down strange alleys, it probably isn’t going to end well, at least not financially.”

For once, I didn’t have a reply. I just drained the last few drops of my drink and sulked.

He interrupted my thoughts and asked, “Well, who’s the stallion gonna be?”

My wild waving hands were a sign that the Zombie Apocalypse had taken over.

“Are you CRAZY. You claim to be an expert of digital content. You should know how reality shows work. You don’t just name the winner, you have to eliminate one at a time. You need fake drama. You need a soundtrack. Besides, at the moment I’m in no condition to make large financial decisions.”