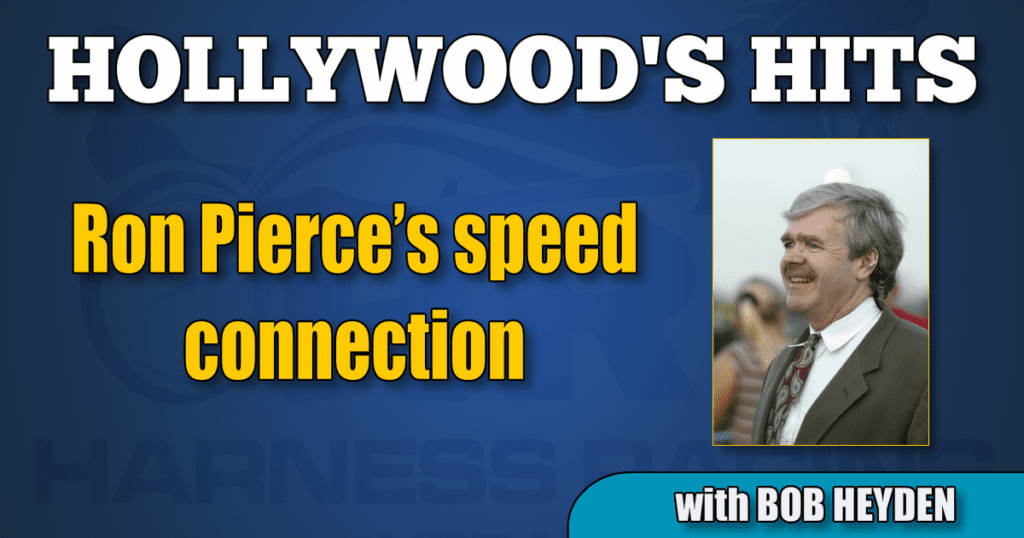 Everyone is likely familiar with the 2008 Meadowlands Pace when Art Official upended Somebeachsomewhere and handed him his ONLY career loss. The unbelievable race was timed in 1:47, which was a Meadowlands and world record for a 3-year-old. Ron Pierce drove the winner.

“I was working for Ernie Spruce, I worked for him twice, once for 18 months,” Pierce said. “He had some good horses — Bregman Hanover, Calabogie Road, Pumping Iron. That night, he set the track record, Benny Webster was driving. That time was the fastest in Meadowlands history to that point-and only Warm Breeze (1:53.1 — Sacramento) had ever gone faster. Ernie had a strict routine for training his horses then. The day after they raced, they were off. Then, they jogged five miles every day, but had to keep the bit in their mouths no matter what. Then, the day before they would race, he would tell you to blow them out a mile in 2:35, last quarter in :33 or :35 — again they had to keep the bit in. By the time they would race, they knew to keep it in for the entire race.”

How would you like to have this kind of pressure on you? In the 1988 Meadowlands Pace, Courageous Legacy became the first horse to race in the Pace that had both parents compete in it, also. Sonsam won it in 1979, and his dam Courageous Lady, was third in her elim in 1978 as the 4-5 choice, then was sixth in the final. Courageous Legacy was off the board the year Matts Scooter won.

Marcus Melander, 28, went 1-2 in the Breeders Crown for freshman trotters and has the winter book favorite Gimpanzee in the 2019 Hambletonian. The native of Sweden is trying to be the first trainer of a Hambletonian winner born not only after the race switched to New Jersey in 1981, but even after the 1989 Dead Heat Hambletonian of Probe and Park Avenue Joe. But, he would NOT be the youngest SWEDE to win the Hambletonian. That honor still belongs to 24-year-old Per Eriksson from 1985 with Prakas.

Three Hall Of Famers teamed up and sent out a million-dollar winner — Modern Art. Ted Gewertz was part-owner, David Miller the driver and Joe Holloway conditioned the son of Artsplace who was second in the Breeders Crown at 2 to I Am A Fool and then the NJ Classic winner at 3.

The seven year-end titles in 2012 by Tetrick are the most in the sport’s history.

Just two of the top 25 driving seasons of all time, ranked by earnings, came when the driver had fewer than 2,000 starts that year.

Casie Coleman is fast closing in on her 10,000th career starter.

Jimmy Takter ended up with 9,972 starts, but his stats don’t include the pre-1992 seasons.

Ron Burke is on pace to hit the 10,000-career win plateau — never before approached in our sport — somewhere around Hambletonian Day.

As for drivers, there are 17 in the 10,000-win club and nine of those are in the Hall Of Fame. Eight of the 17 are either retired or deceased.