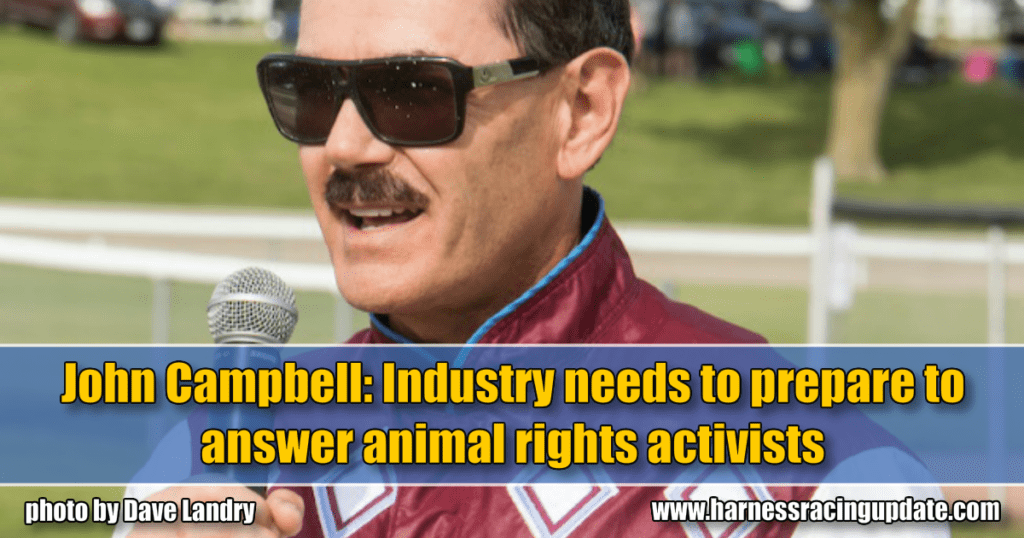 In light of the horse deaths tragedy at Santa Anita thoroughbred track, the president and CEO of the Hambletonian Society said harness racing better be prepared to answer some serious questions about horse safety.

John Campbell said the harness racing industry should be prepared to answer questions about horse safety following the tragedy at thoroughbred racing’s Santa Anita Racetrack in which 22 horses have died since the current meet opened the day after Christmas (full story here).

Campbell, the president and CEO of the Hambletonian Society, said Saturday the Santa Anita issue is not officially on the agenda for today’s society meeting in Florida, but it needs to be.

He said he doesn’t know what specific questions will be coming the harness racing industry’s way from animal rights activists and mainstream reports, “but there are going to be some and I think we better be prepared as an industry. It’s just a tragic disaster (at Santa Anita) and if you don’t think it affects us, you’re sadly mistaken. I think it’ll be a discussion and the industry has to take notice and see how the thoroughbreds handle it.”

“I think we have to get it out there that we don’t have a breakdown issue, that it’s very, very rare to have the catastrophic injuries in our game that they do (in thoroughbreds),” Campbell said. “The horses are different. They are built differently, they train differently and the business model is different. Everything is different and we do not have that catastrophic breakdown problem that they do, fortunately, and I think we should be trumpeting that. Having said that, once the animal rights people get involved they are not going to differentiate between thoroughbred and standardbred. A horse is a horse to them.”

And one horse death is too many.

“Exactly,” Campbell said. “So, it’s something that we are going to have to be aware of and be prepared to be proactive, rather than reactive.”

Santa Anita is currently working with the People for the Ethical Treatment of Animals (PETA) to improve horse safety and Campbell said it is better to work with PETA than against them.

“I don’t think there’s any question that you have to work with organizations like PETA and show them and educate them and, when things aren’t working, make changes,” Campbell said. “I don’t have the answer on what changes are going to work for them, but you cannot make them an adversary. I think that’s a big mistake by any breed to do that.”

One thing Campbell said would likely help is establishing universal rules throughout North America for whipping.

“I think if we could just get uniform on the whipping rule, that would be a big step and a positive one,” he said.