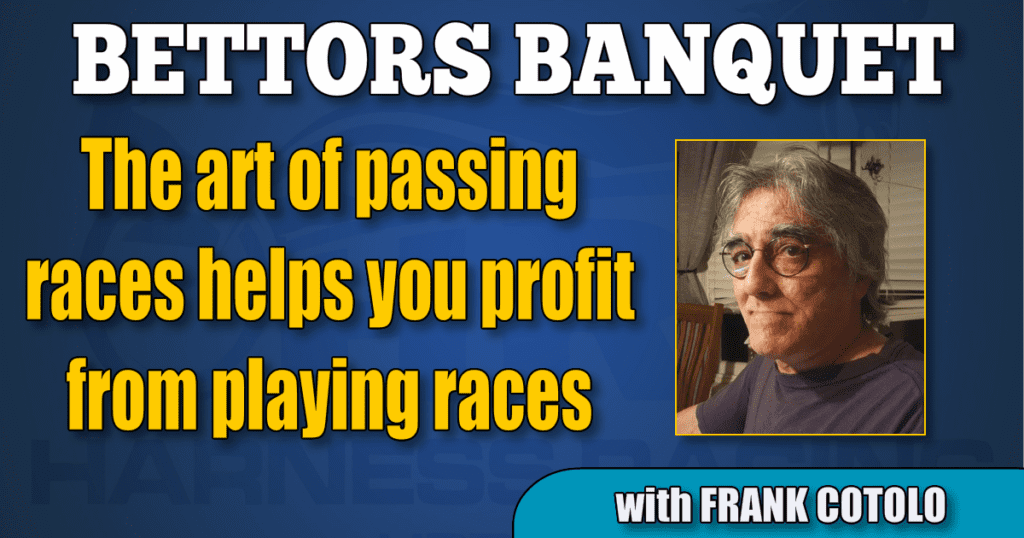 The art of passing races helps you profit from playing races

Once you know that you wager into far too many races than is neither sensible nor profitable, it will mean nothing unless you react by responding appropriately and decide which races to play at all. The average player should accept this as an easy task; except he or she is bound to immediately choose the wrong path by looking for races they deem best to play or pass. That is not how to resolve the problem, because making the decision to pass or play a race is — get this — not your decision.

In the rule, not the spirit, of playing for profit, you must be invited to play or pass a race. You will be notified of the invitation if and when the possibility of profiting on a race surfaces. That circumstance is the product of how the betting public, as a whole, wagers on a race. It is the betting public constructs a potential scenario for you to recognize so that you may bet on a race. You should not use any personal reason to bet; you must leave it to your competitors — the enemy.

Never forget your enemy is every one of the other bettors. Even though they bet individually, they make up an entity that is out to win your money. After all, we bet among ourselves on the pari-mutuel platform (pari-mutuel means “among ourselves” in French) and in order for you to make a profit you have to sensationalize upon the enemy’s miscalculations.

This is the art of passing races; canny behavior that produces what you and I really achieve by playing the game in the long run — to be one of those scant few that toss a profit from betting on harness races.

For the sake of simplicity, let’s approach the steps of race-passing-or-playing first and use other Bettors Banquet (BB) columns to explain important elements involved with each that benefit a player.

Cutting to the chase, your handicapping of a race most likely presents a forecast of which horses will finish first, then second and then third (forget vertical exotics for now; let’s concentrate on win bets). For , we look at Race 7 on March 5 at Western Fair Raceway. Our two fictional bettors, Delaney and Ollie, are poised to pass or play.

Delaney has selected Impressively Done as the winner, with Princess Julieann as his second choice and Master Switch as his third choice. The public agrees with him about Impressively Done, who becomes the race favorite at 6-5. Delaney’s second and third choices are also being made public choices — Master Switch is going off at 2-1 and Princess Julieann at 4-1. The enemy has spoken, but Delaney does not see the invitation to play for profit. In fact, he is happy to join the enemy and support Impressively Done with a wager.

Ollie has selected the same three horses in the same order as Delaney. However, Ollie reads the enemy’s invitation loud and clear. He too will play this race but he will support Princess Julieann with a win bet.

Delaney’s win bet comes through. Impressively Done wins and pays $4.20. Ollie’s win bet on Princess Julieann at 4-1 is a loss when she finishes last (the reason for her loss is moot). The great majority of bettors I have known (and most I do not or never will know) would say that Delaney did well because he chose to play and won, while Ollie was foolish to play because he abandoned his first choice, the same selection as Delaney made which won.

Contrary to everything you may ever have learned about gambling in general and what devices you employ to wager on pari-mutuels, you must admit that Ollie made the proper wagering action. Here’s why: Ollie decided to bet based upon the probable profit presented by Princess Julieann. Ollie trusted decision over . Delaney never considered playing any other horse but his first selection.

Delaney would not have passed the race in two lifetimes because he was married to his three choices in the exact spots he predicted. Delaney will hardly be able to make a profit in the long run (which judges us all) without the options of passing or playing.