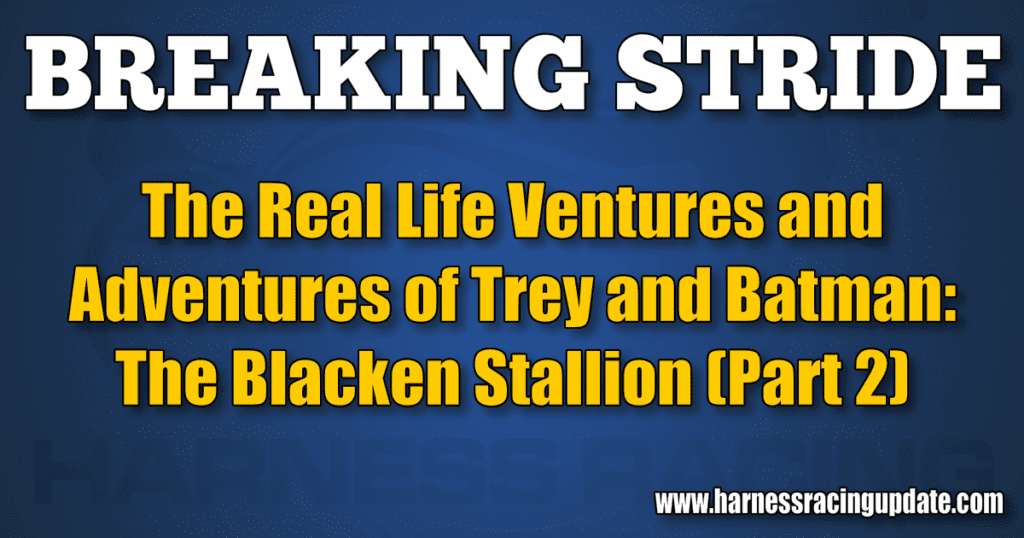 I wrestled my Prius into a metered parking space in front of the Cleveland Museum of Art. Before we unbuckled and climbed out into the winter sunshine, my friend from Silicon Valley turned to me and said, “I keep thinking about the story you told me yesterday, about Beau Blacken, the ballplayer that fell through the cracks and never had a true chance at the big leagues” (full story here).

The flag on the meter was , so I fished six quarters out of the console pocket, “Yeah, every time I breed a horse, bet on a horse, or buy a horse, part of my brain wants to help the underdog. I just can’t play the favorite.”

He nodded, “We want everything to be fair, which of course it isn’t. So steer me back to your stallion selection method.”

“Breeding my broodmare is just a fun thing, not a business. I just wanted to try the breeding game and just sort of stumbled into. Honestly, I don’t understand all that much about breeding, but I also don’t care all that much… so it all works out.”

We stepped out of the car as he asked, “But your babies did fine on the track?”

“Yeah, but it’s a small sample, probably beginners luck. My thinking is all over the map — personal experience, stubbornness, prejudice, total nonsense, plus a dash of karma.”

I slipped the quarters into the slot on the meter. Each coin gave a clunk and whirling sound. I said, “That will give us two hours, really? I need two minutes.”

“All part of the conspiracy to make you a gentleman squire.”

“Yeah, good luck with that.”

“Where do you start?” He asked.

“Magazines, farm websites, and a lot of time on the Internet. I cross off the stallions that profess they are full and closed. This is fine and dandy because my fiscal situation is usually down and out. Another group I usually cross off are syndicated stallions; to me, syndication sounds like an expensive golf country club with members paying dues to keep out the riffraff. I have country club incidents in my past.”

He tapped the roof of my car with his knuckles and said, “Always a rebel.”

I gave him a power-fist salute, “The rebel without a clue.” We began to walk towards the entrance and I continued, “I like stallions that have yet to have a racing crop – but I nix very YOUNG new stallions. A couple of times I booked to immature studs that were shooting blanks. My broodmare is normally reliable, it took a while to find out and it cost me money. I lost a full season one year, and another year I wound up with a late foal after a Hail Mary switch.”

I thought for a few steps and said, “For some reason, I think it is cool when a stallion has raced in Europe. I also like horses that have raced at least 30 to 40 times.”

A few steps later, I snapped my fingers and said, “I pass on lightly-raced brothers or sisters of monster champions, and I skip the “two-years of breedings for the price of one.” They remind me of my divorce in 2011, I can’t imagine having been forced into a second year.”

“I recall hearing about that one, the Wrath of Karen Kahn.”

“That was epic.” I gave a palm slap to my forehead before getting back on track. “Other than those weird prohibitions, my stallion hunting madness is untethered. I’d breed in Maine or Florida if I could make any sense out of the idea. Heck, with the computer, I’d breed in Norway if I saw a path.”

He shook his head, “Your mind is like Walt Disney on acid.”

“I hear a different drummer, my man. The thing is, in my little breeding game, I figure, why desperate, or pay full price, or follow the herd. The market for second-tier stallions is tough. Establishing a new stallion without industry juice is like rock climbing wearing roller skates. If you have a new stallion with only twenty bookings sold in April and I have a mare who throws sires stakes horses – hell, you should pay me. Actually, I saw an idea advertised in Canada where they pay the broodmare owner for a live foal. Those stallions are still on my table.”

He opened the museum door, waved me through, and said, “This is an amazing mixture of fact, fiction, and farce.”

I nodded. “Stud fees are a weird dance. You have regular stallion owners and syndicates who hold the line at the listed price. I suppose they don’t want to deflate the price tag, good for them. They know what they are doing, but normal and an organized structure are not my things, I think there should be variables.”

“My thinking is, this is 2019. I just got off a plane last week with 184 seats and none of us paid the same price. We all landed at the same airport. As far as I know, nobody jumped off into the Pacific when they found the person next to them paid half of what they paid.”

“No frequent flier miles, no first class seating, and no preferred customer perks for Trey?”

“No, I won’t pass security at respectable airports. I don’t even know where I’m going until the last minute. Give me a ride for a good price and I’d sit inside a piece of large baggage in the overhead bin if it got me to Tahiti.”

He smiled and said, “You have to book something.”

I nodded, “My normal shopping starts a few weeks before the scheduled foaling date. I settle on three, maybe four options, and one at a time, I send out emails. Eventually, I make a choice, sign a contract, and bang, we rock and roll.”

I added, “There are plenty of ways to book a stallion, online auctions, charitable organizations that have breedings available, traditional farms, swaps, gifts, pity, and blue light specials. I give privately owned stallions that need business an extra look because it makes me feel like I’m shopping at a mom and pop store.”

“Do you have your list of final candidates ready?”

“I’m working on it. I’ll run my choices past you after I tidy up my list. Then you can help me pull the trigger. The way I select stallions is like speed dating. It’s oddly fun and the results are exciting. That’s how I met Karen Kahn.”