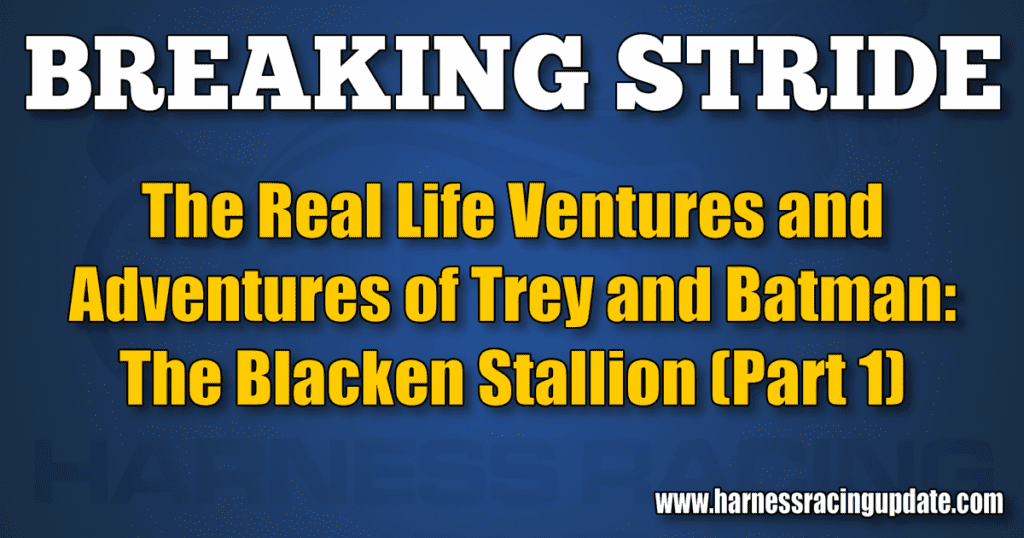 “Isn’t it about time to choose a stallion for your broodmare?” asked my new pal from Silicon Valley as we waited at the DQ drive-thru for our milkshakes.

“Yeah, I’m going to get help for my procrastination problem one of these days.”

“No doubt you have an infamous Trey theory when it comes to selecting stallions.”

I handed him his shake and gave him a thumbs up. “Of course, I have dozens. No doubt they are absurd, but the whole stallion selection thing is a muddle of madness and hype to me. I just wing it using some rules of the off-road.”

I speared a straw into my plastic lid, took a slurp and said, “You’ll lose your mind if you keep trying to understand mine. I’m always contrary and rarely correct, but the strange thing is that my scorecard in selecting stallions for my mare is great. She has had four babies, the first two raced at the sires’ stakes level and the next two in the pipeline are looking good.”

He tipped his milkshake in salute and asked, “What’s your system?”

“I use an anti-system. Different sires, different states, never top tier stallions, never pay much, and every breeding is a crazy little saga.”

“My thinking is that famous stallions, the netherworld of syndication, the high prices, the pedigree fanatics, and the researchers are a loop of normal customers. I ain’t in that loop. For one thing, I just have one trotting baby horse each year and I don’t NEED to sell it as a yearling. I can race if I don’t get my price, so market trends don’t mean diddley to me.”

“But you never get the great stallions?”

“Who sez? My thinking is that there are herds of good studs that never have a prayer. They never get a fair shot. I like to go to these underdog stallions. Heck, three of the four stallions that I bred to, I didn’t know their names until I went semen shopping. One of the stallions had a crop of about a dozen babies; my filly was in that crop and did fine.”

“That’s quite a radical slant on breeding.”

“I call it my Beau Blacken theory of stallion selection?”

He just stared at me, so I explained, “In the year 2005, I spent a season in the lowest level of professional baseball. The team was the Chillicothe Paints of the Frontier League. I met a kid from Lake Stevens Washington named Beau Blacken. He not only had the coolest name, but he was also the best player on the team.”

“How did we get from horse racing to baseball? Where is this going?”

“Think of it like this. If Beau was a yearling at the Lexington sale, this is what you would find — a deep pedigree of great athletes on his family HIP page, flawless conformation, chiseled six-foot-three, 215 pounds, excellent attitude, and a fierce competitor.”

“Luck, or people in his corner. He was a quiet guy. Baseball did not have all the Moneyball stats and data at that time. He probably didn’t get scouted in college, even if a few scouts did wander into the desert they must have been asleep because Beau slammed 14 home runs and drove in 61 runs during his final year at New Mexico State.”

“Still don’t see where we are going.”

“Beau was not drafted, which baffled plenty of people. I know it baffled Beau. He said every coach he played for felt there was absolutely no reason he should not have been drafted. He pretty much led every team he ever played for.”

“At that point, on draft day, or in his case non-draft day, his fate was sealed.”

“Undrafted players like Beau are on their own with very little instruction, eating cheeseburgers on a bus rumbling through the night to play in front of five hundred fans and zero scouts for seven hundred dollars a month. Independent Pro ball is not a developmental league. You play hard, you play hurt, you play non-stop, and you play well or you are gone in a week.”

My friend slurped the bottom of his milkshake and said, “Life isn’t fair, but what does this have to do with selecting a stallion?”

“I believe this happens in harness horse racing, both in the racing and in the breeding game. At a sale, a yearling colt goes for $200,000 to a wealthy group. The horse is sent to a top trainer and he gets the best of everything just because somebody, for some reason, probably a good reason, raised their hand.”

“That’s not a guarantee the horse will make it to the top tier.”

“No, but I gotta believe that big-ticket horse has a leg up on a $9,000 yearling that fell through the cracks, sells to a dentist from Idaho and goes to the fairground barn of trainer Barney Shlump who trains alone, doesn’t use vets, does his own shoeing and rushes the colt to the races. Sure Barney’s colt can climb the racing ladder, maybe even climb high and potentially become a stallion – but the odds are much longer.”

“What happened to Beau?”

“He played four years in the Frontier League, playing for the Chillicothe (OH) Paints, the Evansville (IN) Otters, and the Florence (KY) Freedom, hitting 50 home runs, driving in 233 runs in 378 games, and twice batting better than .300. He never got a call from the Major League affiliates, never got a look, never really had a chance.”

His manager in Chillicothe and Florence, Jamie Keefe said that Beau was popular with the fans, and respected by the opponents. He said he was one of the most feared hitters in the league and was respected by more clubs than any player. He said Beau was a game-changer, he figured out a way to beat you.”

My friend said, “I don’t know if that’s a happy story or a sad story.”

“Me neither, but man, the whole thing shows how thin the line is between “making it big” whatever the hell that is, and not making it big. Chance plays a hand. A horse gets sick the day of his biggest race, a scout shows up and the batting practice pitcher can’t get it over the plate, a horse draws badly in his big race, or the baseball scout is out having a smoke when a player cracks on 480 feet – stuff happens.”

He nodded, “Or doesn’t happen.”

“True. I Googled Beau the other night, it looks like he is married, and they had a baby. If Beau was a stallion, I would like to have that foal over plenty of offspring of Major League All-stars born in the same year. I like to give the Beau Blackens of harness racing a shot in my own goofy way.”

“So, do you have a Beau in your bullpen of potential studs for your broodmare?”

“I do, three or four including a couple of complete unknowns. One of those breeders is going to enjoy a call from a crazy dude with a proven broodmare.”

“There you go again with the pressure. I mean, it’s not like the world is going to run out of stallion semen, or that these stallions are all going to fill their books. Even if one did fill their book, there are plenty of others.”

“And no doubt Trey has more loopy theories.”

“I have an infinite supply of lunacy. When I’m ready to pull the trigger, I will give you a few stallions and fabricate reasons why these stallions are fantastic choices. You can help me make the final cut.”

“Sounds like a plan, a crazy and tardy plan, but at least a plan.”

I thought for a second and then said, “And if I get a colt out of my craziness, I’m going to name him Beau Blacken.”