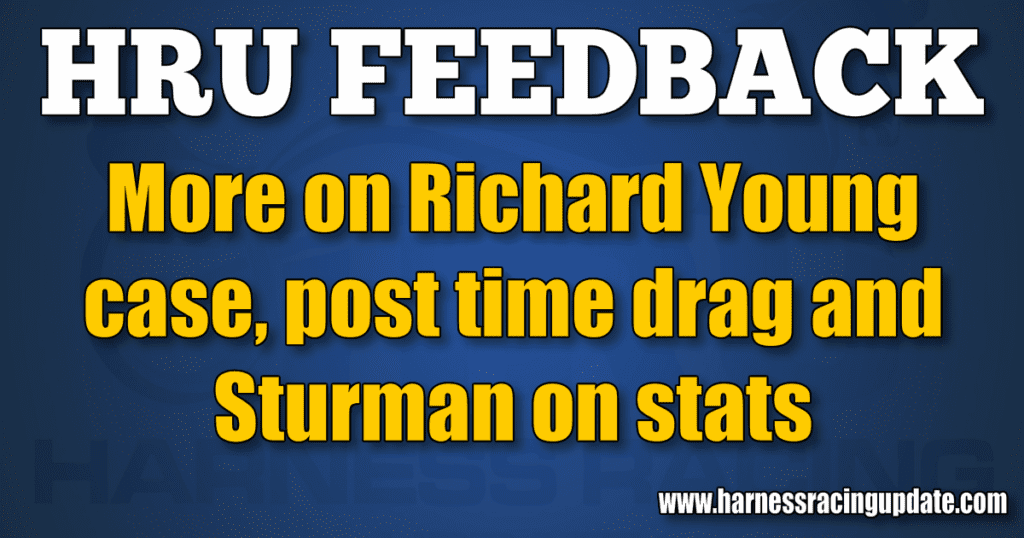 Why does the Minutes Until Post display as zero at least 5 minutes or more prior to each race? That doesn’t get anyone to place their bets any sooner because everyone knows that it is not an accurate or meaningful number.

Why do people bet so heavily on odds on favorites? A classic chalk player once said, “Better a short price than a long face.” But I always remember the words of John Berry who often says, “Hardly a man is now alive who paid his mortgage at 3 to 5.”

With regard to the Young case, I still don’t understand the basis upon which it was sent to a jury.
In the Feb. 3, 2019 issue of HRU, Russell Williams was quoted as saying Young “…tried to argue that the As-Is Clause was no longer the law in the US… that was the main defense and he lost…” Young himself was quoted as saying “we didn’t argue that (the breeder or seller) knew because it didn’t matter if they knew. They should have known, that’s really what it comes down to…”

In his Feb. 10, 2019 response to the initial HRU story Young states that “…Our first defense was it was standard practice to return such horses (i.e. those with a congenital heart defect)…” and “…the breeders would take them back…” He then went on to say that he also argued that the seller had made an express warranty with regard to the yearling in question and “…that there was such communication admitted at trial…” However, he never said what the express warranty was and Russell Williams was quoted in the initial HRU story as saying that the trial transcript reveals that “…nobody in the case testified that there was a warranty…”

Only the jury instructions and the jury verdict would shed any light on this issue and I have seen neither.

With regard to the issue raised by Dr. Moore, the sale/purchase of a yearling at public auction creates a contract between the buyer and seller and incorporates the terms and conditions of the sale catalog, including those that pertain to express and implied warranties and their disclaimer.

The sale of a pregnant yearling filly clearly violates the seller’s implied warranty of fitness for a particular purpose, i.e. training and racing. The question then becomes whether or not the seller is protected from liability under the provisions of the sale catalog that state that all yearlings are sold “as is” and “with all faults”. In my opinion, the answer should be “no.”

Most states have adopted the Uniform Commercial Code, including the provisions thereof that relate to express and implied warranties and their disclaimer. An introductory provision of the U.C.C. (355.2-302) is intended to aid in the interpretation and application of other relevant code provisions, including those pertaining to express and implied warranties. This introductory provision is entitled “Unconscionable Contract or Clause” and provides that “If a Court… finds… any clause of the contract to have been unconscionable at the time it was made it may refuse to enforce the condition….”

While I do not believe it to be unconscionable to enforce an “as is” clause with regard to the sale of a yearling with a congenital heart defect (at least where there is no evidence that the seller knew of the condition), I do believe it to be unconscionable to enforce the “as is” clause in the case of the sale of a pregnant yearling filly. Such a case would have to involve some degree of culpability on the part of the seller, i.e. did he fail to separate his colts and fillies soon enough or did he know that a colt had had access to the filly at some point in time? Regardless, the enforceability of the “as is” clause would be for the Court to decide, not a jury!

I also believe that there is another legal defense upon which the purchaser of a pregnant yearling filly might rely to void the purchase, one that I think would be much easier to prove. That defense is based on “mutual mistake”. Even though the U.C.C. is clearly applicable to the sale of horses, general contract law also applies.

One of the requirements for the formation of a contract is that the terms upon which the parties have agreed must mean the same thing to each party. Thus, there can be no mistake or ignorance as to any material terms of the agreement. While contracts are not normally set aside because only one of the parties was mistaken (unilateral mistake), they are normally set aside if both of the parties are mistaken (mutual mistake) and the mistake was of substantial importance and in fact formed the basis of the agreement.

Assuming the pregnancy of the yearling filly was unknown to the seller ( the sale could be set aside on the basis of fraud), both the buyer and the seller were mistaken as to her pregnancy (mutual mistake). This could be established by merely asking the seller if he thought the filly that he sold was pregnant at the time he sold her—his answer would have to be “no”. Since no one would question the importance of the pregnancy status of a yearling filly sold at auction, her sale should be set aside on that basis alone.

I have been a small market breeder for over 50 years and have never pregnancy checked a yearling filly before her sale, nor have I ever had a potential buyer request to do so. Furthermore, I am not aware of any yearling sale company that would even knowingly accept the consignment of a pregnant yearling filly.

In response to the feedback provided by Dan Leary on behalf of the USTA to last week’s column about statistical data specific data being made available for free (2019-02-17 Feedback here).

I first appreciate the feedback. There were some points made by Mr. Leary that I agree with – and conceded as much in the column – but other points that still didn’t address the statistic that was the basis for the column to begin with.

All I wanted to know is if seven training wins on a single card was a harness racing record. It seems simple enough, right? This is not available in the online T&P guide that Mr. Leary referenced, nor can it be found on Pathway, even if someone were willing to pay for it. Similarly, information about most driving wins on a card is not available through these means either. I do feel these qualify under the category as “basic” statistics.

As for the data that is available in the online T&P guide or through Pathway (for free), I gave due credit in the column to the USTA for having the last five years of records available for horses, trainers owners. In addition to that though, the data mentioned by Mr. Leary pertaining to seasonal award winners, and records of the major historical races are welcomed sources of information that should have been referenced in the column as well.

The data within the T&P guide is solid if you’re only interested in recent history, but there’s limited information for anything outside of the last five years. And while you could certainly debate what constitutes “basic” statistical data, it should be obvious that much statistical data may not be readily available and is not free of charge.

More than once in my column it was noted how gracious and helpful the USTA was in this particular data request, as they have always been in prior similar requests. The overall point was just that if this type of statistical information is available and can readily be accessed, then how about seeing what can be done to make it more publicly available. Through Mr. Leary’s response in constantly improving and expanding its information, it seems that the USTA is doing just that.