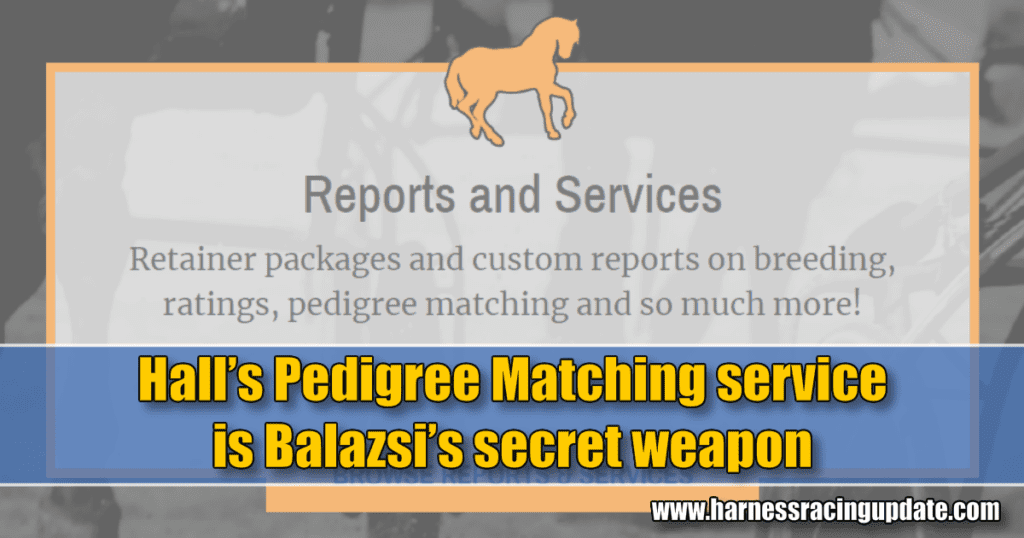 A few years after he started using Norman Hall’s Pedigree Matching service, Stefan Order By Stable is the Dan Patch Breeder of the Year thanks to producing both Atlanta and Gimpanzee.

Sunday evening at the Dan Patch Awards, the Order By Stable will be formally recognized as 2018 Breeder of the Year. Stefan Balazsi’s success with producing trotters on a boutique scale was headlined by Atlanta (3, 1:50.3s; $1,140,689 ) — the Hambletonian winner and Dan Patch Trotter of the Year and Three-year-old Trotting Filly of the year — as well as Gimpanzee (2, 1:54.3s; $591,358), who was a standout among last season’s two-year-old male trotters thanks to an undefeated season that included dominating the New York Sire Stakes, Breeders Crown, and divisional end-of-year balloting.

Balazsi’s rise to success on this continent has been particularly remarkable given the small number of Order By Stable-breds: They totalled just 30 all-age North American starters last year, yet 19 were winners and the group earned a collective $2.47 million in 2018. Call it a royal flush for the self-described “full-time poker player and entrepreneur,” who has been breeding standardbreds since 2001.

Norman Hall believes the results are rare for a small breeder, unless that breeder taps into statistical analysis on the production of champion racehorses. The Prince Edward Island breeding expert is known for his Pedigree Matching site, where he provides a commercial service advising on yearlings, stallions, and broodmares. He attended the Dan Patch Awards banquet in Orlando, FL, to celebrate his client’s outstanding year. Horse of the Year McWicked is owned by Ed James’ SSG Stables, who has also worked with Hall’s system.

Hall tells HRU that he first met Balazsi “about six or seven years ago” at the Standardbred Horse Sales Company’s yearling sale in Harrisburg, PA. The Island horseman was selling Pedigree Matching DVDs at his usual booth, and took a break to “shoot the bull” with Frank Antonacci and friends in the cafeteria. Discussion turned to Lisa America, the Italian-bred world champion owned by the late Lou Guida. Hall remembers that Antonacci expressed interest in purchasing the top daughter of Varenne, and “Stefan sat down and sort of listened to the conversation. When the others cleared out, he said he was interested in what I was doing with Pedigree Matching.”

At the time, Order By Stables owned a larger group of mares residing at New Jersey’s Concord Stud Farm. Hall said he was enlisted by Balazsi to review their bloodlines. “I did my usual thing, sorting them in terms of good or bad in Pedigree Matching. Half the mares scored poorly. They were by some nice sires, but some hadn’t raced for obvious reasons.” Balazsi then sold several of the mares, in foal, and consulted with Hall on the remaining mares’ consorts. “He would pick out some stallions he thought were suitable for a particular mare, and he would ask me what I thought,” said Hall. “He ultimately made the final decision.”

The Breeder of the Year also owns racehorses in Sweden, as Order by Stable AB, Borås. “Initially, he (just) wanted to sort out the mares in New Jersey,” says Hall. Balazsi has most recently asked him about which mares, Swedish and/or American, would be good matches for new sire Tactical Landing.

“The consequence has been that because he’s had success with racing and breeding, he’s established credibility,” said Hall. “He was a top consignor at Harrisburg, with several yearlings in the first session.”

It marks the continuation of a turnaround from seven years ago, when Balazsi did not have any of his yearlings in the coveted opening session.

In 2015, a filly bred by Order By Stable captured significant attention at Harrisburg. Staffan Lind and Karl-Erik Bender’s winning $500,000 bid on Future Secured (Cantab Hall) boosted her into the record books as the highest-priced yearling trotting filly ever sold at public auction (a title shared with Courtney Hall). It also tied the figure for the fourth-highest-priced standardbred yearling ever.

The following year, the then-unnamed Alarm Detector (Chapter Seven) brought $110,000 for Order By Stable, which consigns its yearlings through Concord Stud Farm. Atlanta was sold under original name Django Unchained in the same sale, for a modest $60,000.

In 2017, colt Kings County (Muscle Hill) was Order By’s top-priced yearling, selling for $210,000 at the Standardbred Horse Sale. Colt Marseille (Muscle Hill) drew $180,000, while Gimpanzee (Chapter Seven) went through the ring for $170,000 under his former name, Army of Monkeys.

Last year was the best year of all for Balazsi’s breeding operation, as Sweden’s SRF Stable landed Fifty Cent Piece (Muscle Hill) with a sales-topping $500,000 winning bid at Harrisburg, equalling the all-time record price for yearling fillies. Order By’s Swiss House Onfire (Muscle Hill) was the highest-selling colt of the sale, going to Robert Lindstrom (agent) for $335,000, while colt Back Of The Neck (Ready Cash) brought $150,000.

Hall notes that it’s still quite common to assess yearlings based upon fashionable sires and conformation, without really understanding what goes into making a solid pedigree, or a durable racehorse. “Some got lucky and got a good horse, but you have to have a process and do your homework” for “predictable outcomes,” he said. “Stefan is a very successful business man in his own right… He listens and he tries to understand what’s happening.”

Pedigree Matching was introduced in 1988, to help flag horses with the genetic potential to excel. It has since evolved to encompass software (Pedigree Matching Globetrotter), international lectures, and “Pedigree Camps” in PEI.

Hall likes to share a sobering statistic on yearling selection: “The basic fact is, out of all the yearlings raised, less than five per cent will pay for themselves over a lifetime. But, statistically, you are entitled to one out of four (25 per cent) if you get the pedigree right. That’s the difference between doing your homework and not doing your homework.”

The “Pedigree Guru” describes two distinctive patterns he’s noticed in the bloodlines of the best North American harness horses today. He calls them “double/doubles” (DDs) and “top and bottoms” (TBs), simple terms to express the intricate connections the professional engineer looks for across a horse’s pedigree.

Dan Patch Award-winning older male pacer McWicked is a DD; so is past winner Always B Miki. Because he also works with other breeds, Hall noticed an unusual finding in two of last season’s best thoroughbreds: Catholic Boy and Rushing Fall are both DDs, “bred like a good standardbred is, by a standardbred owner (John Fielding, with Fred W. Hertrich III).”

Hall said it was through close study of an exceptional trotter’s pedigree that he detected the rise of the second pattern. “I always wondered why Moni Maker was so good,” he said. “Then I started looking for them (TBs), and what did I find? Warrawee Ubeaut, Jimmy Freight.” The TB pattern is less common at present.

He was struck that this past Breeders Crown, five of the eight divisional champions had breeding which corresponded to the DD pedigree template, while another two winners’ bloodlines illustrated the newer TB pedigree template, which he’s identified more commonly among thoroughbreds than standardbreds. took heed: “So the plan for going to the sale last year was, Stefan wanted horses who were one or the other [DD or TB]. These were the only horses he looked at, with his partners.”

Hall has a system in which he assigns numerical ratings to yearlings in a . He recommends that his clients inspect only the colts and fillies with approved bloodlines—“You have to have a 140 for a decent trotter and 160 for a decent pacer,” he said, revealing only that he calculates the number for each yearling based on the accomplishments of the family, using a wide swath of statistics, as opposed to a narrow focus on black type in the first three generations, or worse, conformation and videos. “Pedigree comes because pedigree is the first decision in creating a horse,” quips Hall. “It may just be 12 , but it’s the most important 12 .”

The Breeder of the Year was unable to attend the awards banquet due to being sick with the flu, so Julie and her father, David III, of Concord Stud accepted the trophy on his behalf.

“It was a great honor for a small breeder to win the Breeder of the Year,” Julie told HRU. “The small breeders don’t always get recognized, because they don’t have nearly as many to compete the big breeders.”

She calls Balazsi a quiet man, in “constant contact — almost daily” by phone to discuss his New Jersey-based mares and offspring.

David agreed that Balaszi’s “remarkable” accomplishments as a breeder go back to the place where Pedigree Matching also starts: study of maternal pedigrees over many generations. “He keeps to himself, but he studies the mares, respects the genetics on them, and he’s had a lot of success.”