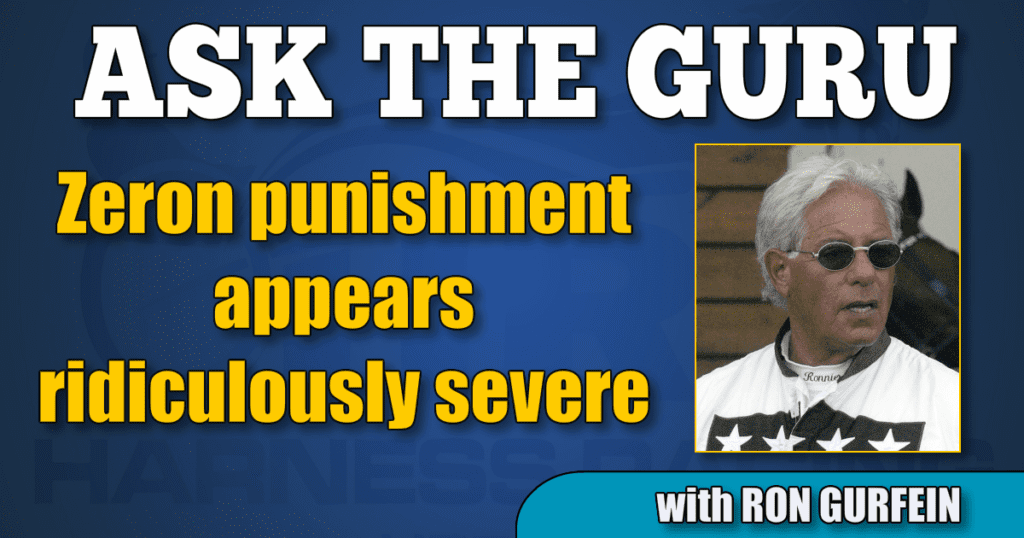 Also, what I learned from great friends such as Mike Lachance, why training on farms became popular and my pick for the greatest driver colony of all time.

After being privileged to read details from the Alcohol and Gaming Commission of Ontario (AGCO) case and subsequent appeal by attorney Larry Todd, it is my opinion that a ridiculously-severe penalty is in the process of destroying the livelihood of the trainer. Did Zeron make mistakes? Yes. Did he do anything that was so egregious as to result in the penalties he received? Absolutely NOT.

To begin with, requiring labels on over-the-counter medications is ridiculous. When the decision first came down, I wrote that if heroin or erythropoietin were involved it was bad, but if you read the charges there is nothing of consequence that you couldn’t buy in a tack shop. GastroGard is very expensive. Many trainers buy generic versions of the drug with no labels. All it is, is Tums for horses. The two horses that Dr. Joseph Malone allegedly shock-waved were not in to race but in to qualify. Why did it take the AGCO half a year to come up with this pile of garbage? The only guilt I see in the entire case is the labelling of over-the-counter meds. Recently, the commission has fined a similar case $300. What is the true story behind these charges? Larry Todd also requested some pertinent information in his appeal and as of this writing he has received nothing.

For heaven’s sake, the man just won the Hambletonian. The public doesn’t understand how insignificant the unlabeled merchandise was, and as mob rule usually works, the masses are demeaning Atlanta’s amazing victory.

The basis of this entire matter is a rule that makes no sense at all — all bottles need to be labelled. Zeron purchased a generic form of GastroGard (omeprazole – Tums for horses) and most likely saved $30 a dose. The medication came without a label, so someone attached a label to a harmless over-the-counter product.

As for the shock machine use too close to race time, I interviewed Dr. Malone and he said he asked the grooms if the horses were in to go and they said, ‘no’ probably because it was a qualifier and may not even been drawn at the time.

To the AGCO, if there is more to this than released, so far, please step up and fill us in. If not, please reconsider the harshness of your penalty and put this mess behind us.
Atlanta is being auctioned online at OnGait.com. It’s a distinct possibility that this entire sordid affair may have been the cause. So sad.

Bill Cohan asks: When I was a kid all the trainers would stable at the racetrack. When and why did training farms become so popular?

First of all, in today’s world it is impossible to stable at some tracks because they no longer maintain barn areas and some new ones, such as Harrah’s Philadelphia, were built without any housing facility for horses other than the paddock. The lack of stall space is more indigenous to the Northeast than to the Midwest or Canada. My personal preference was always to be at the track as I think shipping no matter what the distance is tough on both the trainer, the horse and the pocketbook.

Shipping in to race started to become popular with trainers that pushed the envelope, and then really became popular with barn area closures. Even I succumbed to peer pressure and stabled Continentalvictory at Showplace Farm with a few other horses.

It’s easy to understand that the bandits didn’t want to get caught with a tube down a horse’s throat by some guard tippy toeing around the barn area. Plus, there were times when they would institute car searches when entering the track, and trunk searches if you were stabled there — two more topics of displeasure for the criminals.

In the early ‘70s at Monticello there were very few shippers, but I remember one that was a nice older fellow that had a UDR of about .460, which was enough proof that he had discovered tubing.

Also at the Meadowlands, if you think back, the guys stabled there were your everyday vanilla trainers, ie: Jim Doherty, Ray and Larry Remmen, Bill Popfinger, Ted Wing, and me. We all did okay, but it was the wise guys shipping in that were batting .400.

I am not going to point fingers because there were many honest non-PED trainers with homes in south Jersey that found it convenient to use farms because of the proximity to their houses on a day-to-day basis. Unfortunately today it is a necessary evil in my area as there is no barn area at the Big M, Harrah’s or Freehold and Yonkers has around 40 horses stabled there.

Andrew Kerns asks: What are some of the interesting things your friends in the business taught you?

For certain my greatest life lessons came on the road with Michel Lachance. Every summer from 1992 till the collapse of Illinois racing we drove all over the Midwest. All the American Nationals in Sportsman’s Park, and then Balmoral, The Review at Springfield, the Horseman at Indianapolis, and the World Trotting Derbies at DuQuoin. Lachance is the most regimented person I know. He literally changed my life to the point I would say I might not be here today writing this piece if it wasn’t for him.

He taught me to eat correctly. I was always meat and potatoes and desert for sure. Now I actually like fish, don’t often eat potatoes and never eat desert. He taught me to go to bed early when I could and not be roaming the streets at 2 a.m., and one of my favorites, to stretch in a hot shower that I still do to this day. He taught me to never put a bad horse in the box for any reason at all. They are better off in the stall or someone else’s barn rather than engraving a black mark next to my name. He taught me to stretch a horse out before a major race and how to protect young talented colts. After all that, all I taught him was to drink Manhattans.

George “B” Berkner, may he rest in peace, taught me to eat food I hadn’t had since my childhood and best of all taught me how to play craps in the seedy back rooms in the Catskills.

Dennis Payne (R.I.P.) taught me all I know about shoeing the trotter, and was the blacksmith on all three of my Hambletonian winners. To me, both he and Steve Stanley of Red Mile fame were the greatest minds to ever work behind an anvil.

John “Big John” Patterson Sr. taught me that brace bandages were better protection for a trotting horse than boots and almost broke my arm expressing his point with a hammer.

Phil Tully taught me how important it was to work hard and Alan Finkelson, John “JM in the PM” Manzi and Ralph Swalsky all taught me how to have fun.

Todd Morrison asks: Which driving colony do you consider the best from the following:

Entertaining question. Before I answer, why did you leave Lachance out of 2000-2014 and how come Yves Filion and Henri Filion are not mentioned at all?

That said, I would pick the Big M 1985-2000. I say this without reservation. As of this date, Campbell, O’Donnell and Lachance were the most dominant trio of reinsman to race at one venue in my lifetime. Almost every driver on your list, with the exception of a few, has driven for me at least once and I am more than familiar with all of them.

The Yonkers / Roosevelt colony was great in its day, but when the Meadowlands opened they were a bit past their prime. Many horsemen will tell you Buddy Gilmour was the best driver that ever lived. Let’s revisit this in five years when Yannick Gingras, David Miller and Brian Sears have a little more limelight. They fit well with any group. David and Brian are awesome for big money and Yannick is just plain crazy good all the time.

There will be no View From The Deck on Sunday this week, but it will return next Sunday. Have a wonderful week.