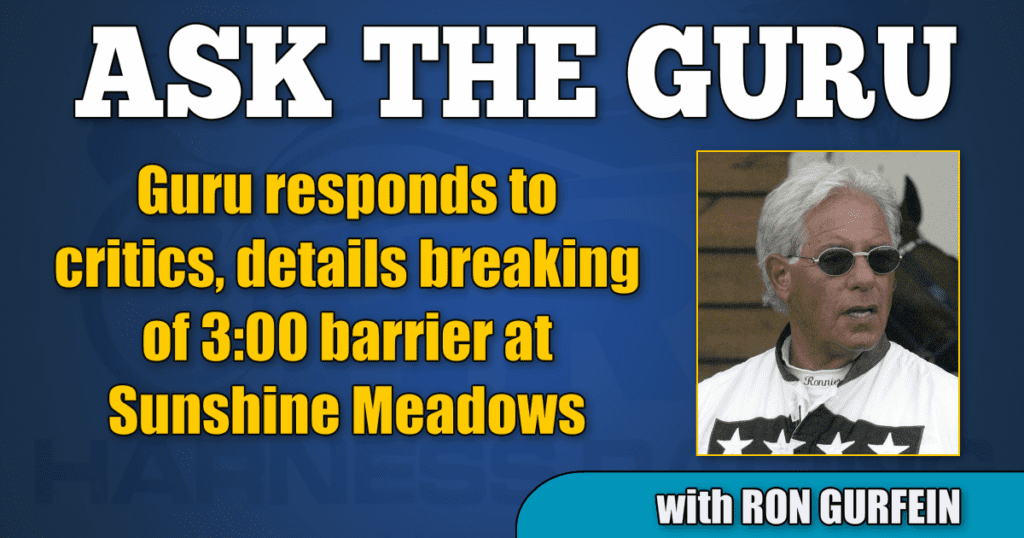 Three-minute barrier snapped in most sets Saturday at Sunshine Meadows

The Guru also responds to criticism over his most recent column.

To say that I was verbally brutalized upon my entrance to The Deck Saturday morning would be an understatement. The main critique was why I didn’t mention George Segal in my answer to Murray Brown’s question about my “rise” in the harness racing world (full story here). Just to keep the record straight, before I even wrote a word I called my dearest friend Art Zubrod (Brittany Farms) and apologized that I didn’t add either he or George to the mix as I felt that the rise was over when they came on board. I had won two Hambletonians and 3 Breeders Crowns when they started to increase the amount of horses I trained for them. George was an excellent owner as was Art an excellent mentor, but they really were not a part of my early career. After I had won my first Hambletonian I got my first horse from Brittany, a 4-year-old mare named Armbro Mascara who I won a ridiculous amount of races with. That was the year I purchased Continentalvictory from Brittany and they never asked to retain a piece. Not that I have to answer to anyone, but to all who really know me, my column comes from my heart, and I refuse to compromise my feelings to appease people that disagree with me. There were many names I could have mentioned: Jerry Silva, Harvey Gold, Kenny Orr, Deana Frost, David Offenberg etc. I said I wasn’t writing an autobiography, so be it.

The Zeron case was also there to haunt me (Editor’s note: see Feedback on pg 19 for more comments on Gurfein’s take on the Zeron case). I am not a champion for anything illegal, just fairness. All the cases I have defended in the past year were cases like that of Al Capone. He was a bad guy, no doubt, but they put him away for tax evasion, not murder or robbery because they couldn’t prove either of the above.

Howard Taylor emailed me that the drugs that were found were Gastrogard (pepto for horses) and some other non PED’s. If true, no foul there. (Editor’s note: The AGCO is also alleging medication was improperly labelled). The word “bribery” has been used in many of the emails I received. If it is true, this is serious. For now, let’s calm down and see how the appeal plays out, if there is an appeal (Editor’s note: as of press time, the website for Ontario’s Horse Racing Appeal Panel (HRAP) does not list the case as having been appealed).

The action picked up big time on The Deck Saturday. The three-minute barrier was snapped by more than a dozen seconds in almost every set. Even The Guru jumped on the cart at the bequest of Murray Brown to go a trip with the beautiful Muscle Mass colt out of Finesse Hanover (Power Play Goal). He could not have been any better going a mile in 2:48, last quarter in 40 seconds and I never asked him to trot. See photo.

The Alagna barn was on the move this morning with a few new faces grabbing the limelight. I find you can’t make much out of the order of finish in these sets as Tony invariably has one of the most talented in each set and will test his mount on the way to the three quarters where he will grab leather and let the rest of the field catch up and often pass him. I won’t give times for all the sets because they all went miles right at 2:48.

Esai Hanover (c, Artspeak—Easy Go Go) and Arts Attitude (c, Artspeak—Has An Attitude) looked great going their miles. It looks like Artspeak will be another stallion in the Alagna lineup.

I really liked Captain Deb (f Captaintreacherous—Western Graduate) going head to head with the outstanding pair of Put To Right (c Captaintreacherous—On The Catwalk) and He Refuses To Lose (c Captaintreacherous—Fox Valley Zenaida) who had a four-length lead at the three quarters and Tony had to slow to a pedestrian pace to let the field catch him.  In other action, Enchanted Path (f Captaintreacherous—She’s A Hot Mess) and Ideal Perception (Klau) (c American Ideal—Southwind Siren), one of my highest-rated pacing colts, looked great heading to the wire.  When I went to train Fred Grant’s colt, Jerry Glantz took over and helped me out spotting What The Luck (c Artspeak—Calvados Hall) besting Captain Video (c Captaintreacherous—Eitherurinorout) and Hopefully Inclined (c Mach Three—Artistically Inclined). Lastly from Alagna came a fine pair of Captaintreacherous colts It’s Showtime besting Chief Mate. The former out of the good Uffizi Hanover, the latter from the Brittany mare Heaven Forbid.

Peter Wrenn went the quickest mile of the day that I saw going solo with the David MacDuffee owned Skyway Tenacious (f Swan For All—The Magic Of Paris). The beautifully-gaited lass toured the oval in 2:47 under wraps.  Also from the Wrenn barn came a quick trio of pacers Silk Angel (f Yankee Cruiser—Silk Purse) and Loose Leotard (c Always A Virgin—Highlandopheliaroc) were swallowed up by the Ernie Niemann driven Panthers Pinot (c Panther Hanover—Baby MC) who from out of left field made a brilliant last to first move on the far outside, impressive.

Middleton (f Somebeachsomewhere—Jolting Kate) would have made Ken proud this morning with a nice mile for Webster/Crogan.

In an exciting head to head nose to nose battle, the entire length of the stretch, Capital Comet (c Chapter Seven—Myolin) bested Hi West (c Cantab Hall—Define Royalty) by the slimmest of noses for Lindy Farms and trainer Domenico Cecere.

I got a great education on French blood percentages from the very well informed Perry Soderberg that I will address in the Ask The Guru column next Friday. Have a wonderful week.