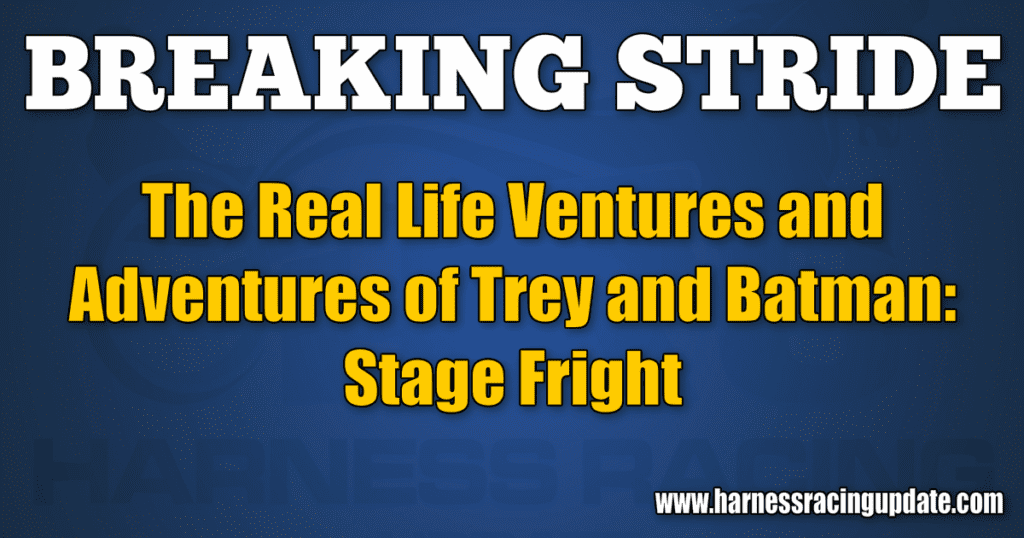 It was almost midnight on the interstate. A dusting of snow fell on the scant traffic. I was driving him home from his dinner downtown at a restaurant so exclusive it did not have a sign, just a bronze plate on a black door that magically opened by a man in a suit.

I broke the silence of the car and asked, “What do you think holds back 99.9 per cent of the public from gambling on horse racing, from buying horses, from breeding horses?”

He looked into the darkness at flickering lights across frozen fields and said, “Fear, it holds people back from exploring new areas they might enjoy. In horse racing, fear of the unknown and fear of failure are problems for entry. A huge percentage of people are very risk-averse, very fearful.”

“Afraid of what, losing some money or being embarrassed? Dude, that’s my career arc.”

He gave one of those tsk sounds and said, “Don’t think you’re so bold or daring, we’re all fearful. When humans lived in caves, the dangers were everywhere. Fear kept us alive. Those dynamics of fear remain hardwired in our psyches. Science and psychology show that people fear the unknown and have great difficulty getting outside their comfort zone.”

“This ain’t the stone age.”

“Harness racing is forbidding territory for a stranger. You can’t see it from the inside. Sure, fear of losing money is a factor, but untold millions of people could buy a horse to race or try gambling on races. They could fail miserably, and not even notice they lost money.”

“Not many people walk off the street and into the sport.”

He nodded, “Deep down, we want to try new things. We know it is good for us, but fear is always there — what if I fail, what if I look silly. Fear stops people in their tracks, or in your case, fear keeps people from finding the track.”

“What about you, a guy with the world by the tail?”

“Fear gets in my way all the time. I think about backpacking through India, rehabbing an old sailboat, starting a non-profit, going on an archeological dig, or a dozen other things. My failure to take that first step is obviously more than money. Risk-taking is complex, much more of a mental struggle than a mathematical calculation.”

He paused for a few seconds, and then said, “Tell me something you fear.”

I was quick to reply, “Karaoke… Man, I don’t care if there are four people in a tavern, if we are all drunk, even if I know them all, I can’t get off that damn chair and sing in public. I WANT to do it. I get close, but always chicken out.”

He nodded, “Yet you have spent thousands and thousands of dollars gambling on racehorses and buying racehorses. You have had heartbreaks on your racing road, but the offbeat little sport drew you in and still draws you. And you tell me you are terrified to sing in public. Does that make sense?”

“I’m not obligated to make sense.”

“We’re all guilty to some degree. Every day, interest and curiosity push us to try new adventures, but fear pulls us back. Staying in our old lanes is much safer.”

“That first step is a bitch.”

“Batman, there is a fine line between the first step into an adventure and a disaster.”

“Disasters aren’t that painful and often turn into opportunities.”

This made him laugh, “Recently, our work is high tech and entertainment is very much about finding people who are psychologically ABLE to take the first step, identifying them, and then giving them a little nudge. After the first step, social media makes involvement easier than ever.”

I asked, “How would you do that in harness racing? And don’t go all wonky on me.”

“Well, that’s a lame nothing burger of an answer.”

“Okay, let’s go back to your karaoke fear.”

“Nope. Right now, stepping into the unknown and holding that microphone is, for some reason, too scary for you. We established that.”

“Suppose we help you find two friends, maybe on Facebook, or in a chat room. Each of you has thought about karaoke but has never gotten over the hump. As a unit, your fear can lessen and you are much more likely to take that first step. Connecting on Facetime or even just texting is less intimidating. It is possible, given a little time, that the three of you COULD step onto the stage and harmonize “Rock This Town.”

“By the Stray Cats? I love that song!”

“Apply that digital breakthrough to horseracing participation. If a few fearful people have the anonymity of a computer or their phone, and if you jump holding hands, the odds of that first step increase dramatically.”

I nodded and said, “I’ve seen it happen. I know a guy, Scott, a genX’er, socially a basket case, who lives in the boonies. About five years ago, out of the blue, and who knows why, for some strange reason he looked into chess on his computer. I’m not sure he even knew how to play. Today, he plays online every day. He has online chess friends, he is in chess chatrooms, and he has a library of chess books. He went from zero to deep and never left his couch.”

My friend zipped up his coat and said, “Exactly. Substitute your sport for his chess investigation; this can happen and should continue to happen. Trying anything new will always be intimidating, but if you think about it, social networks make the first step easier.”

“In theory that sounds good but how do we find candidates, let alone put them together?”

He answered, “Very insightful questions. The world I came from has several answers. We work on this every day in many ways.”

I turned into his driveway, my headlights bouncing off his immaculate white farmhouse, and said, “Another lame-burger answer.”

He opened his door, stepped into the night, smiled and said, “Next time I’ll show you how we filter and how we would find new players for your sport. Also, how we would break through the fear.”