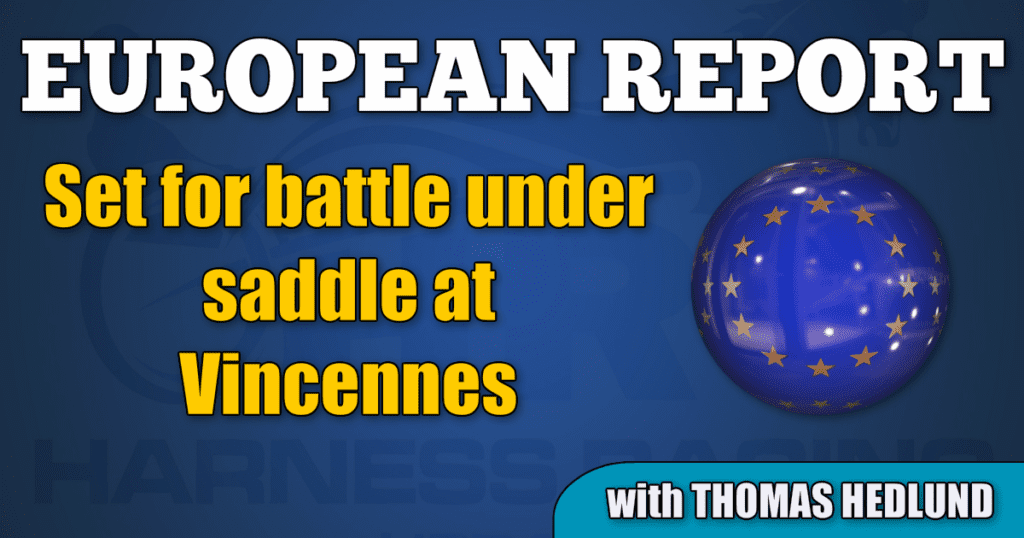 Set for battle under saddle at Vincennes

The highest-staked monté race in the world is scheduled at Vincennes racetrack in Paris on Sunday.

Racing under saddle is large-scaled in France and many great trotters earn big money in the specific genre.

A glance at the starting list for the $741,000 Prix de Cornulier shows three horses seem to rise above the rest of the field of 15.

Defending champion Traders will be a serious opponent to the assumed first choice Bilibili, but behind these two an outsider can be a challenger. Briac Dark has a lot of routine from the highest staked races in France and can look back at two great performances in Prix d’Amérique the previous years.

If anyone besides the three named horses wins on Sunday, it would be a big upset.

Belina Josselyn first – but not a winner

The last B-race ahead of the Prix d’Amérique, the $135,000 Prix de Belgique was held at Vincennes racetrack last Sunday and Bird Parker (Ready Cash) was announced a winner minutes after the race due to some dramatic moments in the race.

Jean-Michel Bazire and his beautiful Love You mare Belina Josselyn played the leading part of the drama at Vincennes, since the duo made a move that the judges couldn’t ignore.

In the last turn, when Belina Josselyn was stuck behind leader Bird Parker and with horses on her outside, Bazire made a move that cost him the victory in Prix de Belgique. Valko Jenilat on Belina Josselyn’s outside was so seriously interfered he couldn’t do anything else than make a break at that point.

Belina Josselyn jogged to safe victory, but was disqualified by Vincenne’s judges and Bird Parker, who already had secured his place in the Prix d’Amérique in two of the previous B-races, got the victory in mile rate 1:57.4 over 1.7 miles.

Big upset Bahia Quesnot trotted three wide during the race’s last kilometer and gave cover to Readly Express, who couldn’t follow to become a threat in the home stretch. Bahia Quesnot on the other hand, fought extraordinarily and took the silver medal ahead of Carat Williams.

With just a little more than a week to go, the field of Prix d’Amérique is beginning to take shape.

Horses that have already qualified for the Prix d’Amérique are:

American-bred Fourth Dimension (Chapter Seven), who will serve as a stud at Menhammar Stuteri in Sweden in 2019, is popular among the breeders in his new home country.

Earlier this week, the owner, Stall Courant, announced that Fourth Dimension’s book is full for this breeding season and the 4-year-old son of Chapter Seven will serve 120 mares.