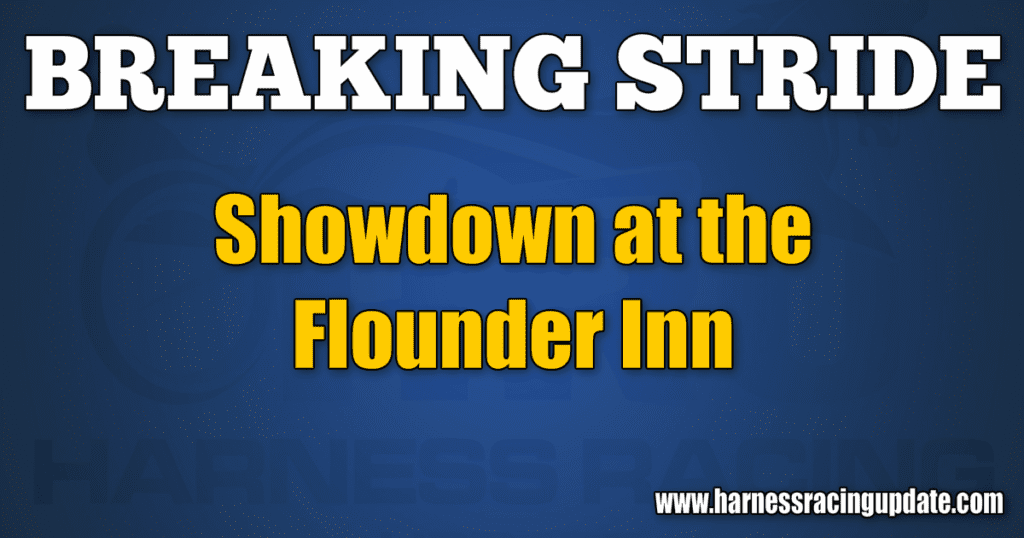 Showdown at the Flounder Inn

Our final evening as a couple began badly. It ended with a serious shortfall in my harness horse funding.

I wanted a burger and a beer. As usual, Linda Weinstein wanted more. Linda, a tall, slender, 37-year-old blonde-haired kindergarten teacher, suggested dinner at the Flounder Inn, a recently renovated dockside restaurant. This quaint bistro would prove to be the stage for our farewell performance.

I would play the male lead without a script. It would soon become apparent that Linda had rehearsed her role. Her opening lines took place beneath a blue canvas canopy built to shelter diners from the Florida sun and rain.

“Tomorrow afternoon my uncle is having a Bar Mitzvah for Cousin Leon. We need to buy a gift and you need to dress appropriately. May I suggest a sports jacket and a necktie?”

I placed my hand on the handle of the black wrought iron door, paused and slipped my Walgreen sunglasses into the pocket of my rumpled Hawaiian shirt. I looked deeply into her oversized Gucci sunglasses, and replied in an overly gentle manner, “May I suggest another plan?”

She spat out her answer like an exasperated rattlesnake. “This is what real people do Trey, they dress up and meet social obligations.”

I strained to keep my voice even, “My wardrobe does not matter because I do not know your cousin Leon, but I do know I will be watching the Hambletonian on a flat screen TV at The Pit Stop Bar and Grille tomorrow.”

She placed a bony hand on a bony hip, “Trey this is important.”

I pushed the door open and we stepped out of the cotton candy stickiness into cool darkness. Before Linda could continue to press her case, an enthusiastic young man arrived to escort us to a table. Wearing a white chef’s shirt with buttons on the side, our escort was greyhound sleek. He introduced himself with a nod of his beret. “I’m Aaron, the new owner of the Flounder Inn. Welcome.”

As Aaron guided a chair beneath Linda, I smiled at the entrepreneur and said, “The place looks great. Good luck.”

Aaron took another small bow. “Thanks, it’s a tough business. This place has had four owners in the last three years. Fortunately, I have a backup plan. My parents are ridiculously wealthy and will pay almost anything to make me appear respectable and keeps me occupied.”

I said, “Cool, and maybe the last owners got the bugs out.”

Handing me a wine list he waffled his hand.

I ran a finger down the selections, “What do you recommend with bugs?”

Linda was not amused since light banter was not on her menu. She fixed a phony smile on Aaron and hissed, “Give us a moment, please.” The “please” was so counterfeit it was painful.

I scanned the room. Linda began to talk, “I don’t think you realize how much a Bar Mitzvah means in my family. It’s an important ritual.”

“It should be done in a doctor’s office.”

She cocked an eyebrow. “That’s another ritual.”

Aaron returned to stage an intervention and take our wine order. I handed back the wine list and said, “Surprise us… with the wine, not the price. Just keep it under twenty bucks and don’t make me smell the cork.”

Aaron laughed. Linda gave a fake smile, which made her appear to be passing a kidney stone. She said, “He’s so charming.”

Linda asked me, “Any news on the young horse, Miss Money Pit?”

“Yeah, I got a text from the trainer this morning. He said she is really trotting great and she has talent, but she developed a pus pocket in one of her feet and he needs money for the last round of staking.”

She tossed her hands into the air, “You hear that she has talent. I hear that the horse has a wounded foot and send more money.”

She sighed dramatically, “You’re a delusional dreamer and I might sue you if you’re ‘Let’s spend a few dollars on a baby horse that will race in Pennsylvania and win money’ continues to escalate.”

Aaron returned with a bottle of wine, two glasses, and a smile. He poured the wine and took our order.

When he departed, Linda temporarily abandoned our racehorse and the Bar Mitzvah. She began to complain about how the playground policies at Belmonte Elementary school annoyed her. The list was long and her words became a hum. I kept nodding gamely as she kept moving her incomprehensible lips and absentmindedly refastened a rubber band around my ponytail. Eventually, my gaze shifted to a Tampa Bay Rays game on the TV behind the bar.

Linda stopped in mid-drone, locked her beady eyes on me and spoke using simple, sharp English, “You… are… not… listening… to a word I’m saying.”

“That’s it!” Linda barked so loudly that the restaurant patrons swiveled to watch the angular woman loudly berating the aging surfer. The Flounder Inn was turning into live theater. Just in case no one was paying proper attention, Linda dramatically gave what appeared to be an umpire giving the safe sign on a close play at home plate as she belted out a reprise, “That’s it! I have wasted six months with a cretin and $10,000 on an invisible racehorse.”

Linda’s hostile tone did not come as a huge surprise. The surprise was her volume and theatricality. The drama accompanied by wildly sweeping hand gestures was mesmerizing.

When I finally refocused, it was like tuning in to the middle of a radio report, “… are an irresponsible buffoon with more baggage than AMTRAK with your betting on horses and buying horses. No wonder you have two ex-wives, they got sick of your drinking and going nowhere.”

She paused for a moment. The woman looked like a crazed stork. She seemed disappointed I was not returning fire but she stuck to her script.

“Both you and your strange trailer-park roommate seem to have a serious vacuum of motivation. He may belong in an asylum, but you are the prince of pathetic people. You are no big deal…you are more like a Big Lebowski.”

I actually glanced behind my shoulder to see if she were reading off cue cards. Nobody uses the terms “vacuum of motivation” or “prince of pathetic” without cue cards.

I whispered, hoping to neutralize her roar. “I’m surprised.”

“Surprised? Even you should have seen this coming.”

“I want my money back for that horse, ALL of my money.”

“The filly hasn’t even raced yet, she’s in Pennsylvania, and she’s not a liquid asset.”

“Well you CAN’T get out right now. I’d ask you to remain involved as a silent partner but you can’t stop TALKING for two minutes.”

“Linda, you knew exactly what you were getting into with that yearling. I walked you through the whole process six times, I even showed you horse videos and horse budgets — but maybe you didn’t hear because you were too busy TALKING.”

Linda then stood for her finale. She tossed her napkin at me. It parachuted onto the bread bowl. She extended a lacquered fingernail a few inches from my Hawaiian shirt and venom spewed out, “I want that racehorse or my $10,000 by the end of the week or you will receive a visit from my lawyer.”

She lifted her pointy nose toward the ceiling, executed a brilliantly choreographed pirouette, and then sashayed out of the Flounder Inn. I waited for the eavesdropping patrons to rise for a standing ovation. Alas, she merely received a few isolated claps as the door shut silently behind her.

The Flounder Inn returned to a dull hum. I felt the tension slip out of my shoulders; it felt like shutting the car off after a long, difficult drive. I took a mindless sip of wine and looked at the door where Linda had made her dramatic exit. I smiled. Each date with Linda was like opening a sack that contained a badger. Ironically, those loud and bizarre final 60 seconds of our relationship was the only time I found her interesting.

Aaron snapped me back to earth when he gently patted me on the shoulder and handed me a beer. He slid into Linda’s vacant seat and poured some wine into her unused glass, “Don’t worry… Florida is a big state. You’ll meet another uptight bitch.”

We clinked in companionship. At that moment, as wine glass met beer bottle, I had an epiphany, an answered prayer, a revelation, a path to follow. This was karma. I leaned forward and asked, “Aaron, do you know anything about the sport of harness horse racing?”

Of such small moments, worlds change. A friendship was forged. A champion trotter stood in a stall. And endless litigation by a disgruntled girlfriend began.