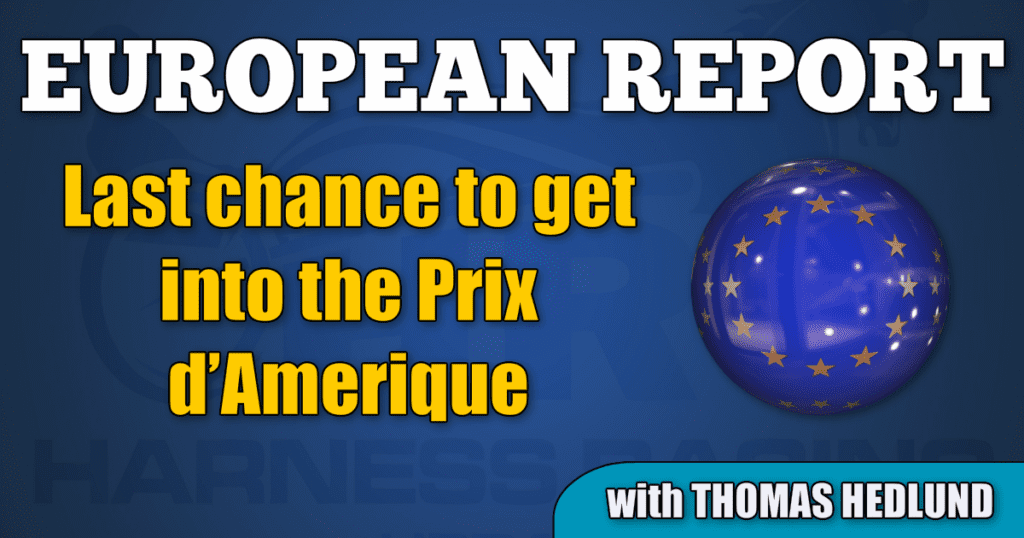 Last chance to get into the Prix d’Amerique

The last B-race, the $135,000 Prix de Belgique, is by tradition scheduled two weeks before Prix d’Amérique. So, Sunday, Jan. 13 is an important date for those who want to reach one of the most prestigious races in the world.

The Prix de Belgique is held over 2,850 meters (approximately 1.8 miles) and 14 trotters will enter the race at Vincennes in Paris.

Bazire’s horses will not lose

Jean-Michel Bazire’s stable has been running like nothing else in France this winter. On Thursday afternoon, Bazire sent his Bel Avis (Ganymede) to the French Riviera, to Cagnes-sur-Mer where the duo won the $135,000 Prix de la Cote d’Azur in a splendid mile rate of 1:56.3 over 1.8 miles.

Bazire’s meeting in France this year is the talk of harness racing fans. The champion driver delivers winners in Paris almost on every race card and for Prix d’Amérique Bazire has three horses qualified. Davidson du Pont, Looking Superb and Belina Josselyn are all set for the great race and two of them will get the last preparation in Prix de Belgique on Sunday. Looking Superb was disqualified in a race at Vincennes last weekend.

Four-year-old dominant Face Time Bourbon chased another victory as first choice in $115,000 Prix de Tonnac Villneuve at Vincennes last Sunday but Guarato’s trotter couldn’t defend himself when Thierry Duvaldestin-trained Falcao de Laurma (Uniclove) found an extra gear in the home stretch. Falcao de Laurma was placed outside leader Face Time Bourbon and it seemed like the favorite had everything under control in the last turn, but his opponent on the outside showed extraordinary qualities and disarmed Face Time Bourbon short before the wire.

In monté race (racing under saddle) in the $150,000 Prix du Calvados over 1.8 miles, three horses were outstanding, which makes next week’s upcoming $746,000 Prix de Cournulier more interesting. Traders, Billibilli and Briac Dark all impressed and Billibilli (Niky) was the one that got out of Prix du Calvados as a winner. The mile rate 1:56.2 over 1.8 miles is a new stakes record and Billibilli will be a serious antagonist to last year’s Prix de Cournlier winner Traders on Sunday, Jan. 20.