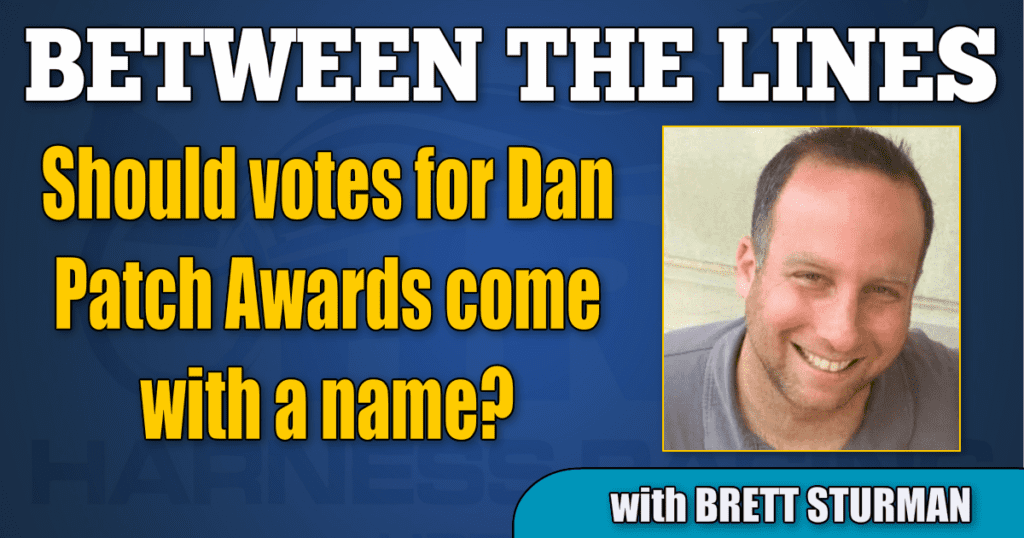 Should votes for Dan Patch Awards come with a name?

Every year as the United States Harness Writers Association (USHWA) announces its Dan Patch award winners, there is normally at least some controversy in at least one of the divisions.

This is to be expected as part of a contentious process where there is often more than one deserving winner, but there are also plenty of instances where votes are treated frivolously, going to horses who in no way realistic way could be considered for divisional honors. In these instances, are votes going for or against horses for purely personal reasons, or is it a matter of simply not paying attention to what horses have been doing throughout the year?

Members of USHWA that I speak to all take their role in the Dan Patch selection process seriously, as I presume most others surely do. But for the small few that don’t, there are ramifications. In addition to the overall process looking silly when far outlying horses take votes away from deserving ones and winning connections taking home physical hardware, there are financial implications that come with the Dan Patch awards – especially if won unanimously – that can easily be thwarted by a single stray vote.

Are these reasons enough that there should be some level of accountability in the voting process, and have the names of the voters released that correspond with each of their selections?

I can’t say which USHWA voters pay more attention throughout the year or take the process more seriously than others, but I know unquestionably that at the top of both lists is editor in chief for DRF Harness, Derick Giwner. When asked about how he feels about obviously undeserving horses taking votes away from ones that are no-brainers, Giwner said “It used to really bother me because I felt it kept some deserving horses from being unanimous winners. Now I’ve reached the point where it seems silly to let it get under my skin. It’s only a handful or fewer people, so the integrity of the voting is still in place.”

If votes were made public by voter, one could surmise that selectors may put more consideration into their selections. The purpose wouldn’t be to pressure voters to conform to who convention wisdom says a winner should be, but rather help to eliminate ridiculous votes.

Though of course not mandated to do so, Giwner is one that’s always been forthcoming when asked about his selections in the process. “I’m a big believer in integrity and transparency,” said Giwner.

“That’s why I always divulge my ballot and I’d gladly defend any selection. So, yes, I do think making the votes public puts more pressure on people to make a more logical decision. Don’t get me wrong, everyone deserves the right to choose whichever horse they want, but if the public calls you out on it you should have to stand up and provide some reasoning why. At least that provides a sense of checks and balances.”

In this year’s voting where divisional honors were announced this week (overall Pacer, Trotter and Horse of Year will be announced in February), there weren’t any unanimous winners. There was one ballot that did not list Shartin N for Older Female Pacer, and just a few ballots that prevented a host of others from being unanimous divisional choices as well. Even Hambletonian winning filly Atlanta missed out by four votes from being on everyone’s ballot.

Within the divisions, almost all went according to form. One however that I feel went the wrong way was with the 3-year-old colt trotters. In this division, Six Pack won out over Tactical Landing by a tally of 71 to 46. The margin wasn’t even that close, which was highly surprising to me based on Tactical Landing closing out the year with a resounding win in the Breeders Crown and then an almost equally smashing performance over 3-year-old rival Six Pack and other aged foes in the TVG FFA. Accordingly, Tactical Landing finished ahead of Six Pack in this season’s final Hambletonian/Breeders Crown Society top ten poll.

Giwner was one of the 71 that went for Six Pack and he noted that it was probably his most tough decision on the ballot. He said, “If you asked me on TVG night after Tactical Landing won, I’d have went with him as the dominant performance was too fresh in my mind to ignore. After reflecting back on the year as a whole, looking at statistics and considering both of their seasons from start to finish, I felt like Six Pack did a bit more. He went faster, earned more, and since I’m not convinced that either was the ‘better horse’ I leaned on their stats.”

I don’t agree with Six Pack being the divisional choice, though I can absolutely respect the selection that Giwner and the majority of others made knowing what the logic was behind it. It doesn’t have to come to a point where every voter be armed with numbers and statistics to back up their choices, but at least putting a name with a ballot would aid in the name of transparency. It would help in providing as much confidence as possible into the selection process.