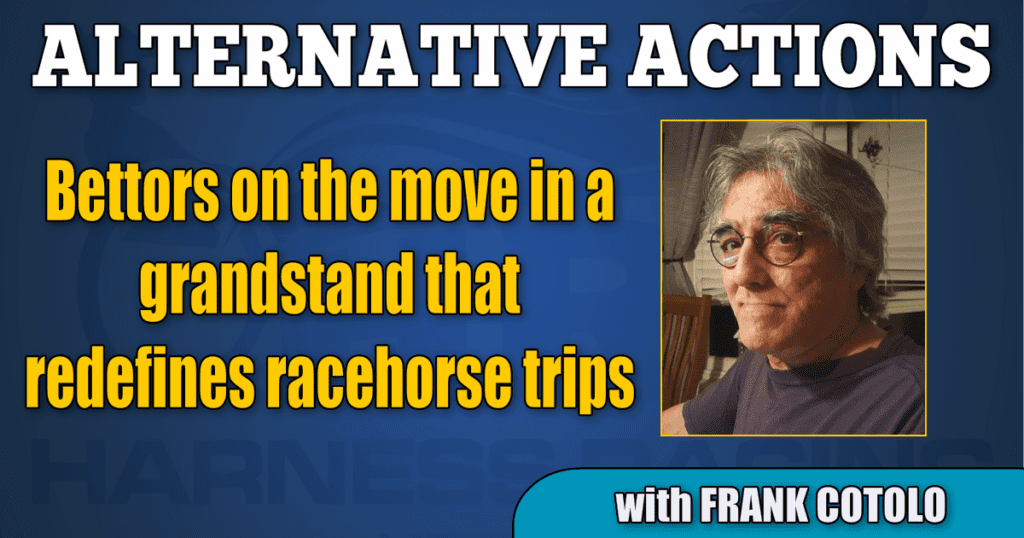 Bettors on the move in a grandstand that redefines racehorse trips

At the end of December this year, the New Mexico Racing Commission will approve a license to one of a half-dozen companies that have made bids to own and operate a racetrack-casino — “racino” — in the state.

What could weigh the decision on which company is awarded the license? One of the bidders is betting that a radical — dare I write it: alternative action — is the best reason to be handed a license. Aside from the usual bells and whistles that any racino proposal may offer, the company wants to include something for fans that has never existed in any pari-mutuel racetrack: A moving grandstand.

The definition of a moving grandstand, according to the company is as simple as its name. It’s a grandstand where bettors sit to watch races while moving around the racetrack along with the racing field, giving each a unique view of races that might only be available if each person was a drone.

The design is not a grandstand in the fashion of different level seating, as in theaters and stadiums. In this case the grandstand is a train that rolls around the oval on rails. It is a silvery bullet cabin streamlined vehicle, appearing much like the Japanese high-speed super trains, only the moving grandstand train has one side that is an observation car, where people sit, facing the track, to ride along with every fraction of the action.

It is not an original idea in itself, though it would be the first such viewing theater for racetracks. The bidding company presenting the idea modeled the train after a similar vehicle that rode the spectators of an intercollegiate New York State championship series of boat races (a regatta) along the Hudson River in Poughkeepsie, NY. The passengers on the moving grandstand view the boat races with a lateral perspective, as racetrack bettors would watch horses compete at any distances programmed. A typical speed for a race on a one-mile track means the grandstand train would move around 40 miles an hour.

Once, Poughkeepsie was “the rowing capital of the world,” if you could imagine that boat races were once a huge draw, attracting thousands to the regatta (which offered fan-appreciated activities as part of the programs). It was not, of course, a betting event; not legally, but there is no doubt — take it from someone who grew up amid the shady underworld — that some booked bets before each liquid choo-choo chase began.

The point to be made here is exactly what this column is all about. Whomsoever came up with the idea to resurrect an almost 90-year-old concept and apply it to pari-mutuel racing theaters should get a raise whether his or her company is awarded a track license or not. The person or persons responsible, though not the concept’s original innovator as much as one able to translate the age-old “futuristic” audience appropriator into the atmosphere of the contemporary racing theater, is thinking as all racetrack administrations should be thinking.

A member of the bidding company’s public relations team was quoted as saying the moving grandstand will attract fans. That was first and foremost the motivation for the idea. Of course the fans — the betting audience — comes before all other considerations.

And, if the proposal winds up getting the moving-grandstand bidder the racetrack license, the spin-off opens up a portal for other exclusively related elements that would benefit the serious and casual handicapper/bettor (as well as create new fans and bettors). I thought a slew of such spin-offs that the track could initiate for players (and always remember more players make more money for racetrack business).

For one, the track could heavily promote the benefit of the moving grandstand for handicappers who may only rely upon video replays to measure horses’ past performances. In a moving grandstand, players should be allowed to use their handheld devices to record races themselves.

And why not give the moving grandstand a catchy name to personify it?

The track could offer open seminars on how best to record horses while viewing from the moving grandstand. Imagine an entirely new perspective for trip handicapping, an exclusively independent view that, along with written race charts would more accurately assess “the trials of the miles” (there is a great slogan in that).

Speaking of race-chart makers, their accuracy would improve tenfold, if not more, and the racetrack, using the Trials of the Miles catchphrase, too could promote that.

Open minds and radical changes in marketing focus flood the creative mind with new and exciting ways to make each audience member select a specific track to move their bankrolls. The moving-grandstand concept, for instance, is also a bonus gimmick that improves on-track attendance—and when was the last time any old, used up, tired ideas succeeded at that?