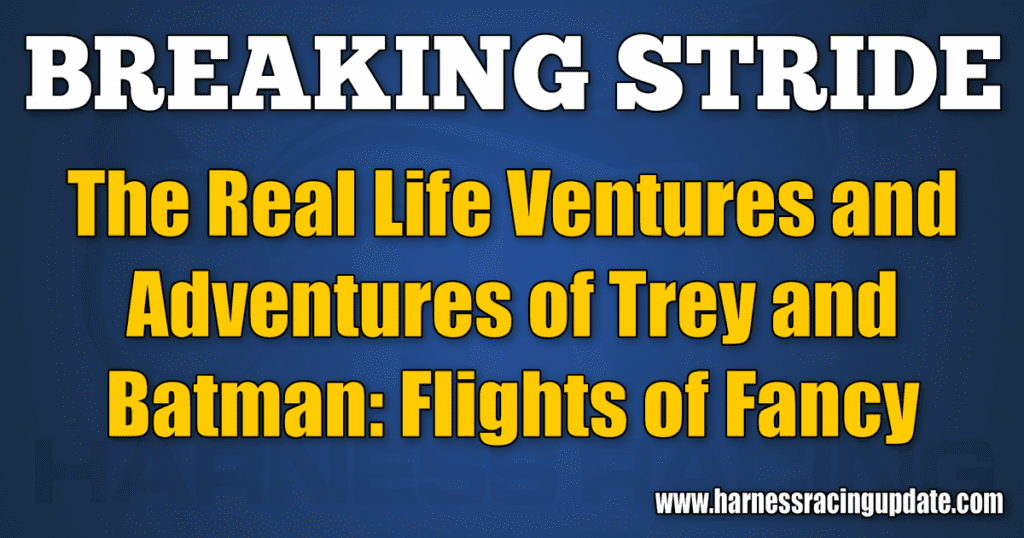 The first thing I saw inside the private blue Cessna was a quartet of leather executive chairs that swiveled and reclined. The mottled wood paneling was warm and classy and a flat screen hung on the wall between the cockpit and the passenger’s seats. My new horse partner and I sat side by side, facing forward. The other two chairs remained empty.

“I share planes with a group of my friends.”

I gave him a thumbs up, “A few of MY friends share Winnebagos for housing, some of my friends don’t have email, some don’t have complete sets of teeth.”

The pilot revved the engine as I asked, “How long to the breeding farm?”

“Twenty minutes in the air, then another 15 minutes to the first farm, about an hour to the next one.”

I swiveled to face him and asked, “Tell me again why two guys, one who doesn’t know all that much about harness racing and one who pretends to know everything, are visiting top breeding farms? Why are we bothering? What’s your payoff? Are you are playing big brother to a juvenile delinquent?”

He leaned back and sighed, “It’s just a windmill. I have time, I have money, and I have experience in the digital world. This is just a challenge to see if I can help turn your harness ship toward new shores.”

“That’s impossible. I love the stupid sport, but it’s not cutting edge. Nobody is captain, our master plan is to hold our breath, close our eyes and cry when we hit the iceberg.”

We taxied down the runway and slipped into the clear blue sky. The plane banked to the left. He pointed out the window to the shrinking houses

His voice thoughtful, he said, “Flight was impossible. On August 13, 1905, Wilbur Wright flew about a thousand feet at Huffman Prairie, not too far from here, near Dayton. People trickled into the offices of the Dayton Daily News to report what they had seen. James Cox, the publisher of the newspaper recalled, ‘They said an airship is in the air over Huffman Prairie… but our news staff did not believe the story. Neither did I, and we did not go out to see.’”

The Cessna quieted as the pilot leveled off.

“Flight was impossible, but here we are,” he said.

“And flight wasn’t? Anyway, re-inventing your sport is not the goal.”

He stroked his salt and pepper stubble of beard, taking his time, “Maybe re-packaging or marketing the product. The Wright brothers took five years to think, tinker, and research before they finalized their plans. They didn’t fly for the money, they wanted the challenge and they didn’t fear failure.”

“You will lose money.”

“Wilbur and Orville were self-funded.”

I added, “Harness racing is a leaky old tub with problems, impossible to market.”

He questioned “Are you sure of that?”

I sighed, “Well, as sure as reality continues to mess up my life.”

“Your life is great. You are above the clouds and getting paid for not working.”

I waved a number one with my index finger and said, “Good point, I thought I would be dead before those two things ever happened.”

He kept on his path, “Jeff Bezos started out in the 1990’s selling books. Do you think books were a hot item in the marketplace? He just found new ways of selling an old product. He got his ball rolling and it snowballed.”

“He had the Internet, and he had a plan.”

“Trey, he had a rather vague plan. Look, I have a theory about your little sport, a theory that few will agree with. Let me ask you a question, why do you gamble on horse racing and why do you buy racehorses?”

“I have reasons – like bad judgment, poor impulse control, and absurd thinking.”

“Yet as you have told me about 20 times in about 20 different ways, with countless examples, consistently making money in the sport is virtually impossible. If you step back and look at the big picture, your sport is trying to lure in new players to do the impossible at a high cost. What kind of dynamics are those?”

“We racehorse people like challenges. We like them in the sales arena and in gambling. Doing the impossible is awesome. I once saw Mel Smithers do a hands-free headstand on an empty Miller Lite beer can.”

He wasn’t in the mood for nonsense and continued without breaking stride, “Taking some focus off getting rich on the back of a racehorse could help broaden the market for a very limited number of ultra-wealthy. I’m talking about targeting a segment who might be looking for a good use of their fortunes.”

My voice came out a touch whiny, “Horse racing is not Silicon Valley, where a new product rolls out every five minutes and money is confetti. You don’t realize the rut horseracing is in. Besides, people don’t want to risk what they have for pipedreams. Optimism and innovation are in short supply.”

He wasn’t rattled, “My ideas aren’t designed to alienate the current players at any level. The foundation players have found their passion and they will stay the course. However, going forward my thinking is to broaden market share with a shift to where the emphasis is on the ride, not the race.”

I slapped the back of one hand against the palm of my other, “I’ve tried that, I’ve had four partners who said they don’t care if they lose money, and that they just wanted to have fun. Guess what, they cared. People are touchy about losing money, even people who have a lot of money. You tell them they have a one in 10 chance of making money, but the words don’t matter. In their heads, they know they are the ONE and then they are absolutely amazed, flabbergasted and pissed that they are one of the other NINE.”

Then he began to talk crazy, “What if you told them up front the yearling they buy will not possibly earn a dime?”

He smiled and said, “What if you told them up front that we are buying a yearling and we will not make a dime. But, we will have fun and if we get lucky we will help people. You might say I am looking for a few angels who could give the sport a boost.”

This slowed down my repartee and I looked out the window at a stray cloud.

I snorted a laugh, “Low expectations, wasted cash, insanity. Jot those down Batman, I may get another tattoo.”

He smiled and said, “Why don’t you get some ink that says – Tried to Fly.”