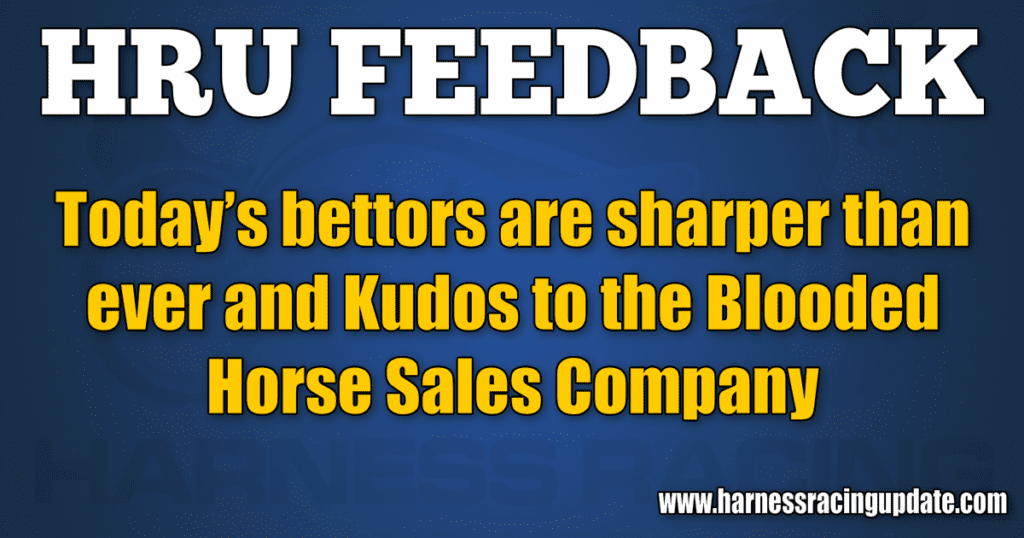 Today’s bettors are sharper than ever

I believe today’s bettors are exponentially smarter than those of yesteryear (‘70s ‘80s ‘90s). At the same time, textbook handicapping methodologies and so-claimed experts are still stuck in days gone by. I believe today’s customer could care less about picking winners but rather “What will get me the most return for my gambling dollar?”

I don’t feel that I need to prove a point about how smart I am but rather how I can best fill my wallet. As an engineer (retired) I’d like to think I can analyze a betting board, handicap various horses’ chances and determine what makes the most sense in winning returns. Winning for the educated might be a show bet on a 17-1 horse instead of a win bet on a 1-2. I prefer as many options as possible. I bypass tracks where there are minuscule pools as there is simply too much odds fluctuation and often the off-odds drop too much after the race goes off. I don’t like high take-out track such as those in PA, I prefer tracks where I can bet $.20 trifectas, $1 win place show minimums, $0.50 trifectas and $0.10 superfectas. Again, as many options as possible. The tracks that don’t listen to their customers, but would rather listen to a marketing manager whose mindset is stuck in the past is destined for failure. Here’s news flash, a 23 per cent hold of 15 $.10 superfecta bets nets the track more profit than 23 per cent of a $1 bet.

So can you hear us now racetracks?

This past week marked my first trip to the Blooded Horse Sales Company venue at the Champions Center Expo in Springfield, OH. I had a mere five horses to sell under Leatherstocking Equine, Agent. Kudos to the fantastic job the employees and management of the sales company. They did a great job of moving horses and most importantly keeping track of where the horses where moved to. The sales facilities are first rate. Solid portable stalls, easy and safe flow of horses to and from the sales ring. Most important for November, the facility is heated. With all that said, I will take this opportunity to mention one thing: the facility is now an hour or so farther in travel for me than the previous venue at Delaware, OH. A drive to this facility that is seemingly in the middle of no place (this coming from a person that lives in the middle of no place) is not horrible. Major roadways make the trip easy, it’s just the added travel time. Why even mention this? Since the inception of the Goshen Sale those of us that support the Morrisville Sale have consistently heard the argument that Morrisville is in the middle of no place; too far for buyers from downstate New York or New Jersey to bother with. Really? After two days in Springfield, I will tell you the people in attendance varied greatly. There were many people from New England, Saratoga, downstate New York, New Jersey, Maryland, Pennsylvania, Ohio, Indiana, Kentucky and just about any other jurisdiction you can think of. Many notable people from the “east” were in attendance. My point is in a time of fewer horses available for purchase, people will travel as far as they need to for a horse that they may want to purchase. The “it’s too far to Morrisville” just doesn’t hold water.