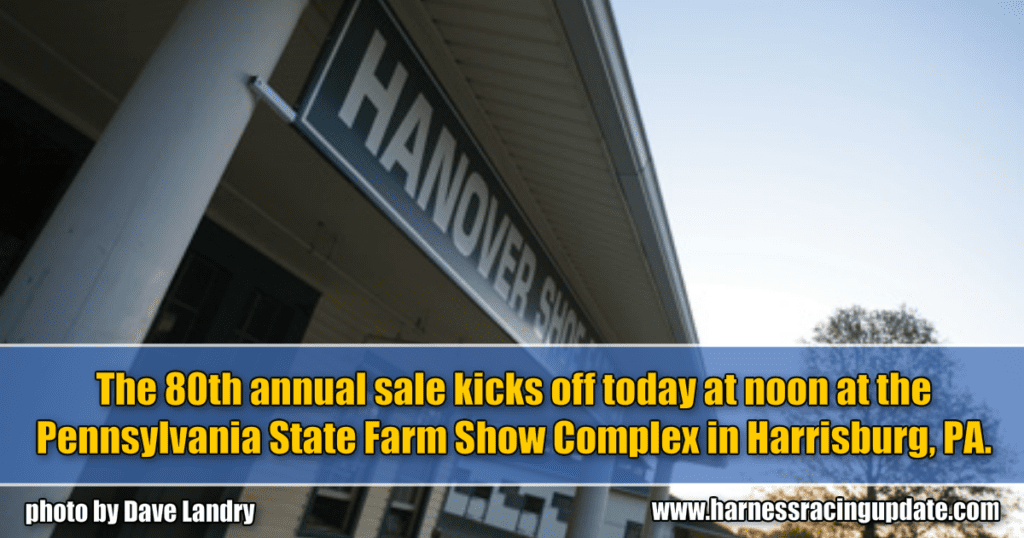 The 80th annual sale kicks off today at noon at the Pennsylvania State Farm Show Complex in Harrisburg, PA.

After more than two years of work to get to this day, Dr. Bridgette Jablonsky said she can’t wait for the first yearling to walk into the sales ring at the Pennsylvania State Farm Show Complex in Harrisurg, PA shortly after noon today for the opening session of the Standardbred Horse Sales Company’s 80th annual yearling sale.

“I get very excited once Monday starts,” said Jablonsky, the much-respected farm manager of Hanover Shoe Farms which owns and operates the sale and has been the sport’s leading breeder every year since breeding records have been kept. “If Monday starts off good and they start rolling, I’ll be feeling really good, but by Wednesday I’m so tired and then I’m looking at broodmares (selling during the Mixed Sale). We go home and we leave and I don’t really have time to reflect (on the success of Hanover’s sale). My biggest satisfaction in this business comes from seeing them on the racetrack.”

Jablonsky was reluctant to name too many yearlings, lest she leave out some notable Hanover performers from 2018, but did mention, “Emoticon (Hanover), two Breeders Crowns in a row; Dorsoduro (Hanover), he’s so game, even at Hoosier the other night; Captain Trevor, Tall Drink (Hanover), she’s a very good filly. I’m proud of them all. I’m the proudest of (stallion) Captaintreacherous. We’re so blessed to have him step in and kind of take – I don’t even want to say ‘take over’ because when I said nobody will fill (Somebeachsomewhere’s) shoes I meant that – but to take up the slack.

“(Captaintreacherous) reminds me of Beach, he’s very much like him. He’s the closest you could have to Beach without it being Beach, I think. He’s been the biggest blessing of 2018 for us, just having him.

“I was so devastated by (Somebeachsomewhere’s death)… Besides losing a relative, it’s the single worst thing that’s ever happened to me, losing that horse.”

Jablonsky said it’s too tough to handicap which Hanover yearling will sell for the most money, but she said her favorite colt is hip 60 named In Reality Hanover. It is a Captaintreacherous full brother to 2-year-old Captain Trevor, a winner of 6 of 9 starts and more than $130,000 with a mark of 1:49.2.

“I just think there’s a little something special about (In Reality Hanover)… he just gives me an air that he’s special as an athlete,” Jablonsky said.

When it comes to yearlings that have special personalities, Jablonsky said one of her favorites from this year’s crop was a Yankee Crusier colt named Elver Hanover that sold in Ohio for $50,000.

“I just thought was one of the coolest yearlings we ever raised. He was so quiet around the barn, so mellow; you could really do anything to him. Better than an aged horse. You could bounce a ball off him,” Jablonsky said.

“The Burke Brigade bought him. I said, ‘If there’s a piece of this colt, he’s very special… I would like to own him.’ I don’t fall in love with them easily, but whenever I walked in the barn, he was always the first one I went over to. Mark Weaver texted me at 11 that night and said, ‘I can get you in for 10 if you want.’ I said, ‘I want’ so I’m in on him.”

Hanover will sell some 230 yearlings over the next three days. Raising and preparing that many yearlings for a sale is not for the shiftless.

“It is a lot of work. It has been the last three-to-four weeks, that’s when it’s the most intense. So, I’m counting video week and then the three weeks after that of showing, you don’t really have a life. You breathe, eat, sleep, just getting these yearlings here. It’s your whole life, you don’t do anything else, you don’t think about anything else. Our guys are working 12-hour days,” said Jablonsky, who figures her time investment is even greater. “If you count all of the responding to inquiries and planning and all the administrative work, not just the time I’m physically spending with the yearlings, the only time I’m not doing it is when I’m sleeping. That’s the truth.”

While she said hopes they all sell well, go to great homes and get an opportunity to be racehorses, her first priority is making sure all horses and humans make it through the sale safely.

“I don’t want anything bad to happen – no disasters. I just want to sell them. It’s two years of work to get to this point.”