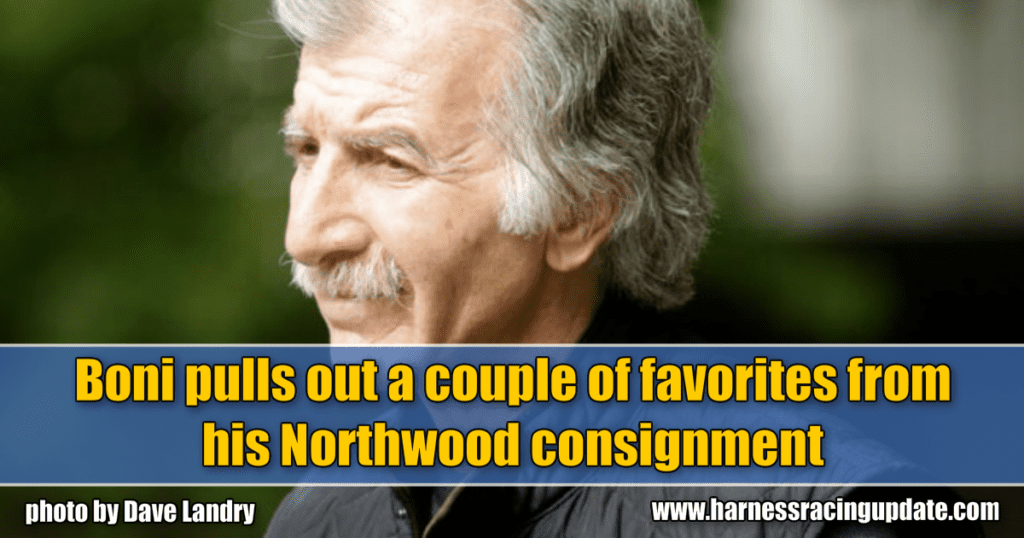 Boni pulls out a couple of favorites from his Northwood consignment

“The one that happens to be out right now is a beautiful filly,” he said. “She’s a sister to Winndevie, that’s a filly trained by Trond Smedshammer that’s made $200,000 this year and has the distinction of being one of those that the only time she got beat was by (undefeated Breeders Crown champion) Woodside Charm. We sold the sister last year for $45,000 and this filly is very similar, maybe a little more leg to her, but a nice filly.”

Boni, who is selling 71 yearlings and another 225 mixed horses, said he is offering a couple of nice Father Patrick yearlings and is particularly taken with hip 2, a Sweet Lou colt out of Before The Poison called Lou’s Sweetrevenge.

“He’s a good colt, very correct, moves well. Ironically or mistakenly, he’s listed as a chestnut, but he’s a bay. So don’t look for the chestnut. He’s called chestnut because he has a light mane and tail, but he’s a bay,” Boni said.

As for picking out some others destined to top the Northwood consignment, Boni said that would be up to the buyers. As it is, even his own opinion of his yearlings changed the more ties he saw them on the inspection floor at the Pennsylvania State Farm Show Complex.

“When you get to see them here on the floor, you get to like them a little more or a little less,” he said as a steady stream of lookers were eying up several of his consignment’s horses.