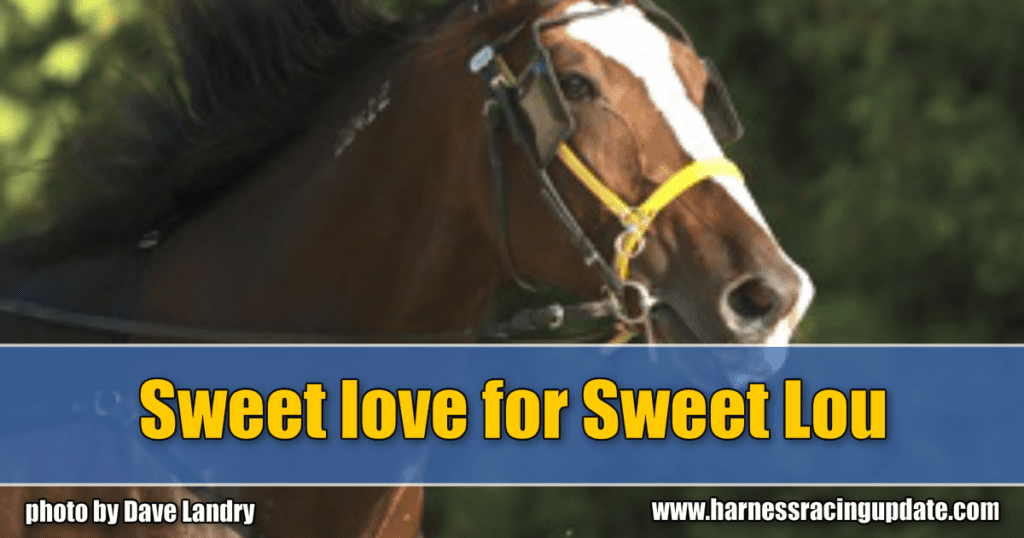 With only his first crop on the track, Sweet Lou is the sport’s leading sire of 2-year-old pacers by average earnings, just ahead of his chief rival Captaintreacherous.

The statistics don’t lie, said Mark Weaver. After a stellar performance in the Breeders Crown, Sweet Lou is the leading sire of 2yo pacers by average earnings. As of this week, Sweet Lou has average earnings of $27,324 from 97 foals, compared to Captaintreacherous at $26,436 from 113 foals. The late champion Somebeachsomewhere is third at $20,261. Both Sweet Lou and Captaintreacherous have their first crops on the track this year.

“Captaintreacherous has also had a good year, but it seems to me that for every one time that someone mentions Lou, someone will mention Captain four times, so I don’t feel like my man has got his fair due,” said Weaver, one of the original owners of Sweet Lou along with Mike Bruscemi, Burke Racing Stable, Larry Karr and Phil Collura. All the original owners are also part of the Sweet Lou Syndicate that includes Diamond Creek Farm that stands Sweet Lou in Pennsylvania for a fee of $12,500.

Sweet Lou is the sire of Warrawee Ubeaut, the 1:48.3 world record holder and winner of the Breeders Crown freshman filly pace — and also a horse co-owned by Weaver and trained by Burke. In the Breeders Crown for freshman pacing colts, the winner, Captain Crunch, was sired by Captaintreacherous, but is out of a mare (Sweet Paprika) that is the a sister to Sweet Lou. Also, horses sired by Sweet Lou finished third, fourth and fifth in that race.

“(Sweet Lou) still has to prove himself year after year, but we think the success he had the first year with not the best book of mares — especially when you compare him to his competition — we think the future should only get better and better,” said Weaver, who admits he has a soft spot for Sweet Lou as a game-changing horse for himself, Burke and the other partners.

“To me, Lou was the people’s horse. When we got Sweet Lou… Ronnie (Burke) wasn’t really known as a trainer that could develop his own. He was more of an aged racehorse guy that would get horses from other people. A lot has changed since then, obviously, now every 2-year-old record is by a horse that Ronnie trained, but at the time Lou was our first great horse that Ronnie had developed. To me, Lou has always been the people’s horse, whereas Captaintreacherous was this big, powerful horse that had all the fancy owners behind him and we were just the poor little Sweet Lou guys, you know? It’s still that way. We priced his fee to try to make him affordable for the average person that wants to breed to a top stallion and we continue to do that.”

Weaver, who said he loved Sweet Lou’s charisma and versatility on the track, finds it interesting that the son of Yankee Cruiser out of Sweet Future, bred by Seth Rosenfeld’s Birnam Woods Farms, is also versatile in the breeding shed.

“Early on, his fillies were really good and people were saying — which is kind of ridiculous three months into his career — ‘Oh, he’s a great filly sire,’ but, as of today, of his top 11 earners, eight of them are colts and only three are fillies.

“There isn’t another horse in the world that I would want to own right now other than Sweet Lou… well, maybe Muscle Hill,” Weaver said, laughing, “but Sweet Lou is poised. He just bred 400 mares Down Under – they are finally catching on.”