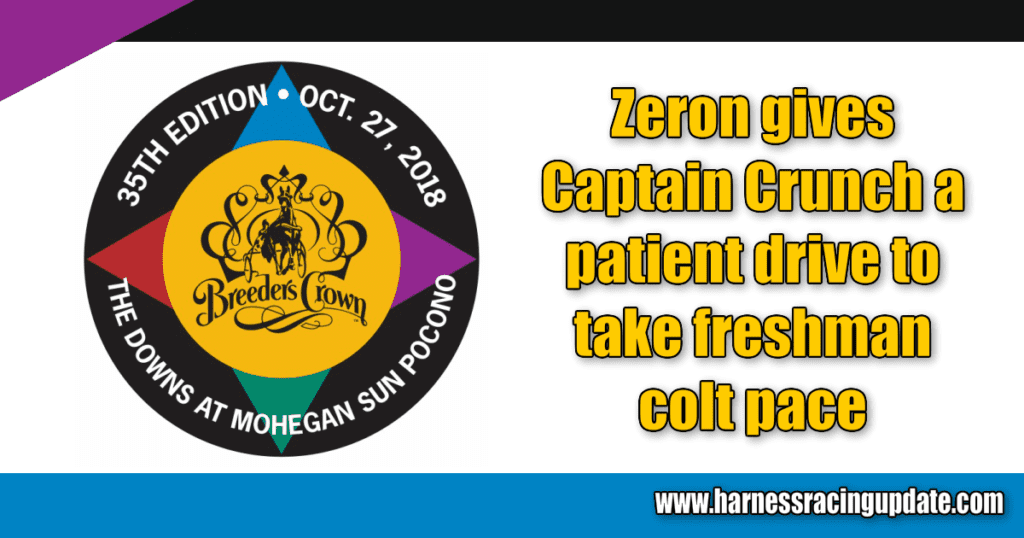 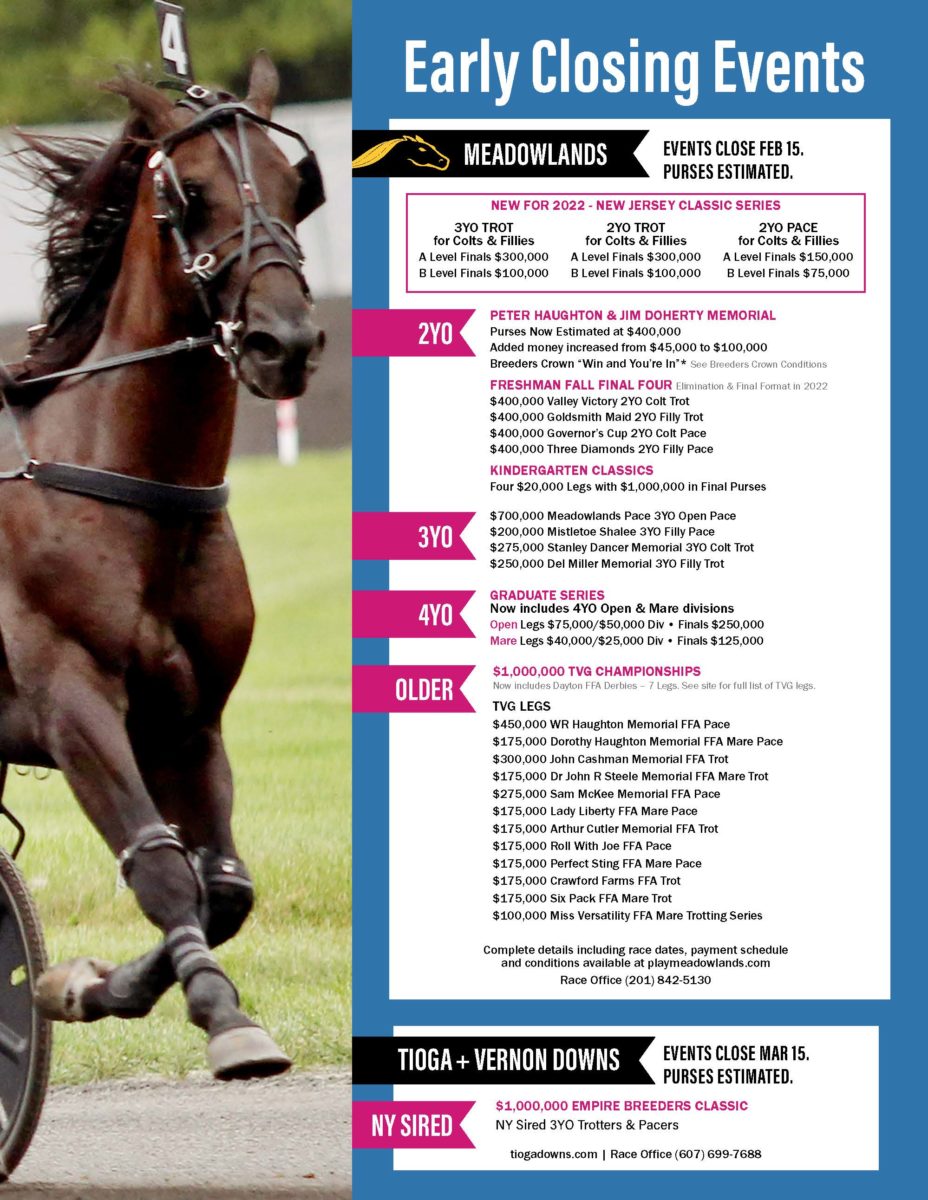 Captain Crunch used a patient drive from Scott Zeron and sprinted past the pacesetting Proof (David Miller) in the lane to capture the $600,000 Breeders Crown Final for freshman colt pacers by three lengths.

The race was action packed from the start and the mile featured five lead changes.

As the gate wings folded, Zeron pushed Captain Crunch for the early lead, but elected to let Blood Money (Yannick Gingras), who came out of the outside post #9, take the lead briefly as they tripped the first quarter timer in :26.4.

Claus Andersen Despite finishing second together with Kissin In The Sand, driver Scott Zeron and trainer Nancy Johansson teamed up to post a Crown triumph with Captain Crunch.

Captain Crunch retook the lead as the field of nine went by the stands at the 3/8 mile pole. Proof was pushed to the lead at the half in :55.1. Miller was able to control the pace down the backstretch and turned back a first-over bid by Captain Trevor (Andrew McCarthy) at the three-quarters in 1:23.2.

Zeron sat patiently in the pocket until the field turned for home and eased the eventual winner off the rail and sprinted home in :28 to win in 1:51.3 over the sloppy track.

Proof held on for second. A fast closing Love Me Some Lou (Corey Callahan) rallied for third and No Mas Amor (Matt Kakaley) was fourth.

“He’s such a nice horse to drive that you can do whatever you want. Start him up, slow him down, start him up again, so it worked out where I could leave, seat a couple of horses and then move,” said the 29 year-old driver. “Whether or not David came with Proof or not, I was content where I was.”

Johansson is the daughter of trainer Jimmy Takter and co-owner Christina Takter. Johansson’s father has announced his retirement from training at the end of the season and won the race preceding the 2-year-old colt pace with Tactical Landing in the sophomore colt trot.

Johansson was three quarters of a length from making it a Takter family training triple when Kissin In The Sand finished a game second to Percy Blue Chip in the 3-year-old filly pace.

“Obviously, to win a Breeders Crown is really special. I was a little upset after Kissin’s race. I really, really wanted her to win, but that was just an amazing effort in defeat. So, for Crunch to come out and get it done was great,” said Johansson.

“He’s such a nice horse, like Scott said. He’s a pleasure to drive and you can do whatever you want with him. He never really asked him to go completely, so he has a very bright future ahead of him.”

With the win, Johansson and Zeron each hoisted the Breeders Crown trophy for the second time.

Johansson won the 2014 2-year-old filly pace with the eventual ‘Horse of the Year’ JK She’salady.

Zeron was victorious in the 3-year-old filly pace with Call Me Queen Be in 2016.

Captain Crunch is from the first crop of Captaintreacherous and was bred by Walnridge Farm Inc. and Sherri K. Meirs and sold for $85,000 at the 2017 Standardbred Horse Sale in Harrisburg. His dam Sweet Paprika is a half-sister to Sweet Lou, who was the sire of Show Me Some Lou, No Mas Amor and Blood Money.

“Crunch” started his career with three straight wins, including a division of the Nassagaweya at Woodbine Mohawk Park. After a disappointing sixth in the Metro Pace elimination, he rebounded with a win in the International Stallion Series event at The Red Mile. His winning time of 1:49.1, was just a fifth of a second off the world record.

Captain Crunch has shown an affinity for The Downs at Mohegan Sun Pocono surface as three of his five career wins have come at the eastern Pennsylvania oval. His career earnings are now $392,196.