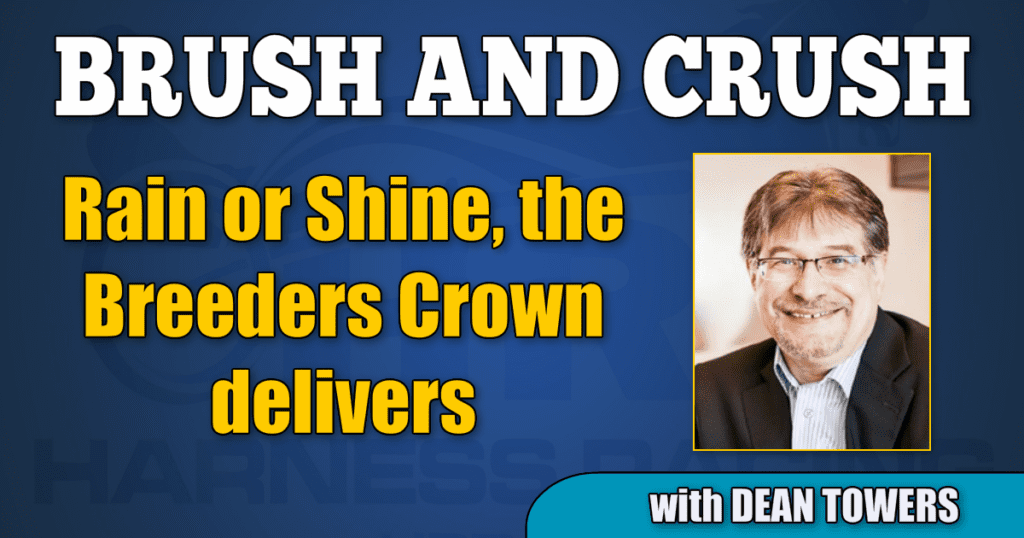 Golf fans lament the weather at the British Open, but I’m not sure that championship can hold a candle to ours of late. This year, the rain came down, and to make matters worse, the temperature was colder than I generally am at the windows.

I don’t know how you feel, but when all was said and done it made no difference at all to me. It was a great night. Please allow me to whip through a few things that caught my eye, minute by minute during the evening.

The first Crown race of the night saw the uber-talented Warrawee Ubeaut convert after being tested mercilessly by several good fillies. She looks like something special.

The kick-off race reminded me how good harness racing is when the fields are evenly matched and the drivers give it a go. It was wonderfully entertaining, and the bettors responded with a Pick 4 pool that approached $60,000.

Twenty minutes later, we saw a 2-year-old trotter (who looks as handy as a 4-year-old pacer) splish-splash to a convincing win to keep his undefeated record in tact. If you’re not excited to see what Gimpanzee can do next year I don’t think you like harness racing. Marcus Melander ran one-two.

If you were impressed with Gimpanzee I suspect you marvelled a few moments later at another Chapter Seven offspring in Woodside Charm. She’s 7 for 7 and she’s sensational. How nice is it that even in this day and age a small stable can get a horse like this?

The fireworks returned for the 3-year-old filly pace with Yannick Gingras parking out Scotty Z and Kissin in the Sand, yet again, as he did in the Lynch in June. The result was not too dissimilar, because Kissin in the Sand is simply a better horse, but it was a shame the Nancy Johansson trained filly could not take home the roses. She is an amazingly determined, class filly and deserved better off that monster effort.

How good is Tactical Landing right now? Congrats to Jim Takter for his patience and horsemanship. What a great job.

Captain Crunch had terrible racing luck last week for the aforementioned Nancy Johansson, but this week it could not have worked out better. And after Kissin in the Sand, she probably deserved some racing luck. It’s fitting that Sweet Lou and Captaintreacherous both landed in the Crown winner’s circle as sires in their first crops.

The Crown for older trotters was probably another victory we could describe as fitting, where Homicide Hunter, as the fastest trotter of the season (and in harness racing), bounced back from a sub-par effort in his elimination to grab the chocolates. George Napolitano won his first ever Breeders Crown.

Shartin N looked beaten. She really looked beaten; well to me, anyway, but she had other ideas. She’s 100 per cent standardbred racehorse. Jim King gets his first Crown and I thought that was so nice to see.

The mandatory payout of the Pick 5 generated $72,000 of new wagering, which was slightly above the normal 300 per cent of the carryover.

Who did you like out of the big four in the filly trot, Atlanta, Plunge Blue Chip, Phaetosive or Manchego? The quietly good Lily Stride had something to say about it and lit up the toteboard for Tetrick and Harder. You just never know in this game.

If it all comes down to the Breeders Crown, a hard-luck horse in Dorsduro Hanover finally got his due. The son of the late Somebeachsomewhere was nothing short of brilliant as he crushed a nice field through wicked fractions. Kakely gets his second of the night; although for this one he’d probably give all the props to a fantastic colt.

Luc Blais is a very good horseman who can get a horse ready for a big event, and he did it once again with Emoticon Hanover. The daughter of Kadabra gave Ontario sired horses their second win of the evening. Huge props to Ake Svanstedt for his move with Ice Attraction. It made the race and he almost stole it.

The last race of the evening was the open pace, and while this year’s event wasn’t quite as compelling as most years, we still had McWicked against Lazurus. It’s a shame the Down Under horse had issues, because off a :55.2 half the race would’ve probably been interesting if he was right.

Notes – I thought Gabe Prewitt and Jay Bergman did a nice job in the booth, despite some technical issues here and there. It’s difficult to pull this type of evening off, especially with the weather. Kudos.

How good is Greg Blanchard? He’d probably be embarrassed being singled out, but I’ve always believed he’s got that Sam McKee vibe to him, because he is so likeable and enjoys the sport immensely. It comes across in each and every interview. I thought he did another great job.

It was a tough year with a lot of bad weather for the cards to try 15 per cent takeout, but I can tell you without equivocation the customers I spoke with appreciated it. If the Crown sticks with promotions like this, I think they’ll build not only a good racing brand for the future, but a good betting brand, too.