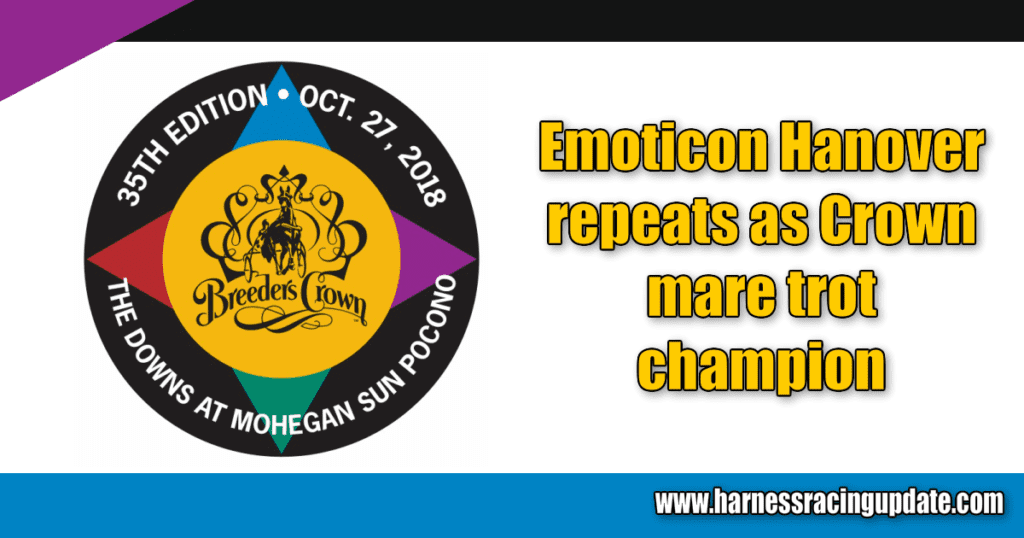 Last year at Hoosier Park, Emoticon Hanover took the field gate-to-wire in the same division, defeating just three other rivals. This time around, at The Downs at Mohegan Sun Pocono, Emoticon Hanover faced a full and competitive field, but was able to sit an ideal pocket trip with driver Daniel Dube in the bike.

“She’s so nice,” Dube said following the win. “She does everything right. She leaves the gate and could race from behind, too, she showed this year. Now, she’s more relaxed. She’s just a special mare, you know.”

As Ariana G got pressure from Broadway Donna along the backside through the half in :56.4, Ice Attraction made a last to first move along the far outside, sweeping by the rest of the field one-by-one to challenge Ariana G at the top of the stretch. Ice Attraction would go on to put away Ariana G down the lane, but she couldn’t hold off Emoticon Hanover, who made an outside move of her own late to cross the line in 1:54.1 over the sloppy going. Ice Attraction held on for second, while Caprice Hill was third.

“I did it mostly the same like last week, follow Yannick and go to the passing lane finishing outside this time,” said Dube, who recorded his seventh career Breeders Crown victory, and also drove Emoticon Hanover to victory last year. “It worked out anyway. She was strong. When I tipped her, I hit the disc one more time and she took off.”

The win was Emoticon Hanover’s first stakes final win of the season. Earlier this year, she won a leg of the Miss Versatility at Woodbine Mohawk Park in May, along with a leg in the Armbro Flight in June. She also finished second in the Joie De Vie Stakes at Tioga Downs, a race she won last year, but was seventh in both the Maple Leaf Trot at Woodbine Mohawk Park in May and the Ms Versatility Final at Delaware Park in September.

“This year has been a little up and down,” said trainer Luc Blais, who recorded his third Breeders Crown win and first since Intimidate in 2012. “Last year she had a very big year. She went everywhere and she raced tough. Sometimes, I think, you see when they have a big year it can be tough. It was the first time she went everywhere; at 2 and 3 we stayed in Ontario. But she’s come back good now.”

Emoticon Hanover was bred in Ontario by Linda Wellwood, Tammy Aspden, Anne Shunock and Diane Ingham. She was purchased for $165,000 as a yearling at the Standardbred Horse Sale in Harrisburg, PA, by Serge Godin’s Determination stable. The 5-year-old is by Kadabra out of Emmylou Who.

It was Godin’s fourth Breeders Crown win as owner. Determination stable has emerged as one of the sport’s leading stables over the past couple of seasons with Blais as its exclusive trainer. Dube had high praise for Godin.

“Unbelievable owner and he’s buying a lot of good horses and it’s great for the business,” he said. “Can’t ask for a better guy.”

Emoticon Hanover recorded her 21st career win in her 52nd career start. Along with her two victories in the Breeders Crown mare trot, she also finished second in the 2016 Breeders Crown 3-year-old filly trot. She banked $150,000 in the victory to bring her career earnings to $1.39-million.