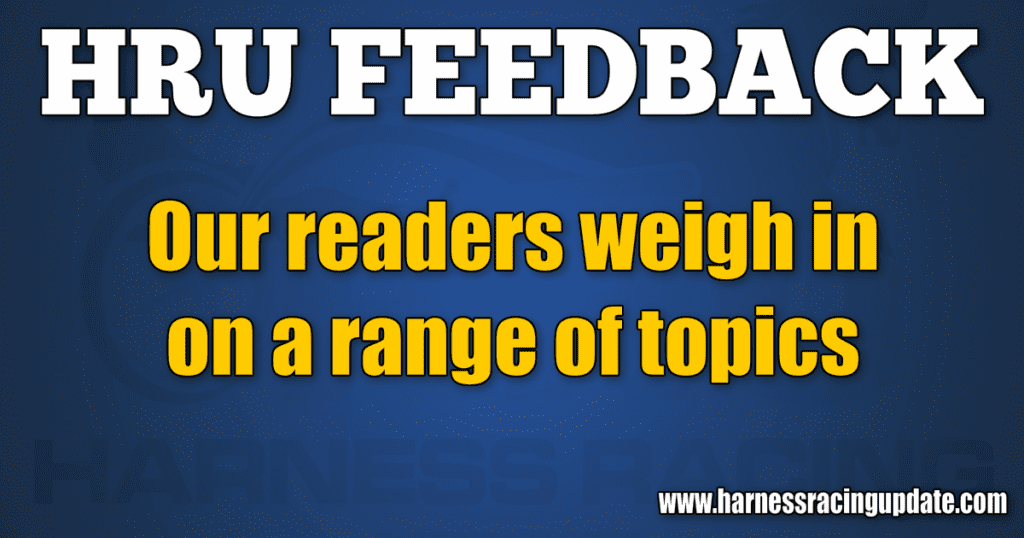 Death by a thousands cuts

Great letter by HRU reader Jerry White in the October 7 edition (full story here). Hard to imagine the young people he encountered returning for more harness racing after they encountered all the little cuts (lies about post time, deception about odds, display errors on monitors) in such a short time. There are other little cuts bringing down the game. It is the abundance of bet types available on each race. The story is as old as the hills. Try to do something for everyone — and everyone loses. So often you are betting wrong. To wit: 1) You hit the exacta, but your other horses may finish third and/or fourth and you would have made so much more betting tris and supers. 2) You bet tris and/or supers and you miss the last position, when you could have made a nice score betting exactas. 3) You blow three consecutive exactas — but, ohmigod, look how big the pick-3 paid. 4) Don’t tell me you forgot to make a win bet on that 10-1 shot you loved!

On many individual races you have the opportunity to bet: Win, Place, Show, Exacta, Trifecta, Superfecta, Pentafecta, Rolling Doubles, Rolling Pick-3. Then there are the pick-4, pick-5, pick-6, etc. There are literally TENS OF MILLIONS of different ways to bet your money, which all but guarantees that you did not make the best possible bet based on your handicapping analysis.

I am a fan of the so-called HORIZONTAL bets. That is, I believe it is easier to select potential winners then it is to figure what longshot will follow the winner home for second — especially in this day and age when COURTESY TUCKS makes trip handicapping very difficult. But multi-race wagers are churn killers. Some players will bet their entire bankroll on the pick-4. I know horizontal bettors who sit on their hands race after race as races are going off because all of their money is invested in “wait and see.”

The number of betting opportunities MUST BE obliterated on each race. Naturally, which ever bets are removed, there will be plenty of “take away MY favorite bet and I’ll never come back” just as there is the contingent of bettors who claim they won’t bet if you start accurately portraying the correct minutes to post. In the real world we call these tough decisions. Like the song says:
Did you ever have to finally decide? And say yes to one and let the other one ride? here’s so many changes and tears you must hide.

DID YOU EVER HAVE TO FINALLY DECIDE!

Yes, you must finally decide — if you ever hope to survive.

I’m not sure what’s in the water (inside joke PG), or perhaps the maple syrup, in Vermont, but the “thesis” stated in Pete Goulazian’s letter is absurd. According to his “expert“ at Dartmouth’s Tuck School of Business, the odds of Manchego, Atlanta and Plunge Blue Chip drawing into the same division (of two splits of the filly Kentucky Futurity) are 700-1. This is absurd.  Three horses drawing into two divisions can only occur 4 ways:

No matter how you slice it, these are the ONLY four ways they can be split. As you can see, in half of the possibilities (2 of 4) there are two in 1 division, and only one in the other. In the other half (2 of 4), all 3 are all in the same race.

There will always be at least two in one race.

So the odds, regardless of if there are 8 horses per division (or 88), are EVEN.

Think of it this way: once horse A is drawn into her division (say the first one), the other two horses (B and C) can only be split two ways: both in same division (3-0), or split divisions(2-1).

There will always be at least two in one race. And it makes sense that the third horse can either complete the trifecta, or race solo. Again, only two options, or even money.

I think the model may be figuring the odds that the three have post 1-2-3 in the same division. I will check with my son (an actuarial science/statistics major at UConn) to see what the odds are for that situation. That’s above my pay grade.

In closing, I would like to see the “simulated model” and a copy of the diploma, if possible!

On half-mile and mile tracks the gate opens at the wire, except for Yonkers, where the gate opens a 1/16 of a mile before the wire, and therefore the horses are in full gear when the race starts as opposed taking a few strides to be in full gear. I had the opportunity to ask Cammie Haughton, and his reply was he would look into it.

Can this be explained?

How Red Mile could be even better

The Red Mile certainly provided two weeks of great Grand Circuit action. Their entire team has much to be proud of. On TV we heard luminaries like Jeff Gural, Michelle Crawford and Tim Tetrick praise Red Mile racing as “historical” and the “highlight of the year.” The late Sam McKee often said the same thing. However, I would like to make a few constructive suggestions to make the experience even better for racing fans and gamblers who are not lucky enough to be on site:

1. Can we somehow get some HD equipment for those special two weeks and not send out a 1975 quality picture, or at least get Trakus?

2. Can we go back to the old saddlecloth with one large number, not one smaller number for the race and another just twice the size for the horse’s number? NYRA uses huge numbers, and the Meadowlands thankfully still uses separate saddlecloths for warm-ups. They do that for a reason: so the fans can see better. To not do so appears bush league.

3. Gabe does an excellent job with his race calls and Nick has a unique and pleasant mode of conducting post-race interviews. It is an insult to the interviewer, to the person being interviewed, and to the fans to switch from the video of the interview to a race replay video. Think about it: we are getting an interview with no picture and a race replay without sound. That violates every precept of TV Journalism 101. What’s the rush? The most successful meets in the American racing industry, think Saratoga and Del Mar, have plenty of time between races. In my last conversation with Sam McKee, he agreed with me that the interview video should not be marginalized and that many harness tracks, including the Red Mile, WEG and the Meadowlands, need a few minutes more between races.

4. Someone has to start thinking from the fan/bettor perspective: Scott Zeron, my favorite driver, states to HRU in his elimination heat he “kind of let Plunge Blue Chip get up to me” and “didn’t want to go to the well” with Atlanta. The money bet on the elims is real, right? Then in post-race comments in HRU we hear from Rick Zeron and Ake Svanstedt how they each credit winning their two respective finals with Atlanta and Six Pack to going barefoot, or pulling the horse’s shoes. The trainers’ strategy proved brilliant, but how about Mr. Twobuck? We’ve heard such trainer comments after a few other big races this year. If many tracks have a video crawler that announces that a certain horse is going to wear a different headpole or that his hobbles are going to be let out an inch, I think it is scandalous that the change to “going barefoot” is not announced in advance to the betting public. It makes harness racing look like an insider’s game.

I sincerely hope that a few executives at The Red Mile will carefully consider my constructive suggestions.

How can we even think what we do now helps our industry together be self-sustaining? I strongly believe we should restrict the number of races a 2-year-old can race. Sure tracks will put up enormous purses for a 2-year-olds, but if we restrict the number of starts then it’s up to the owners and trainers to diligently map out the horses early career. Nothing is possible without the horse and we constantly because of greed or bragging rights go against what is physically possible for a young horse that every day is the unknown to them. This is where I have a huge problem with the industry and this is where I think is the root of the introduction of drugs in horse racing really is. Owners spend big money on yearlings that are well bred and they want a return on that investment so somewhere in that a 2-year-old season they realize that maybe they have nothing more than a race horse and they decide they need to squeeze the lemon dry because of the big purses and then the drugs become the norm and the horse more than likely has not had a chance to make that next step to maturity. We should remember, this is horse racing, not trainer, driver, or owner racing. Without the horse we have no industry. We have to be diligent in preserving a great industry.

Just checked the percentage of winning favorites at a number of harness tracks. We have a wagering product that is impossible to bet. Northfield leads the way with 49 per cent winning favorite result. Numerous other tracks are 40 percent plus. All of these make it difficult to place a 200-500 win wager without destroying the odds to ridiculous returns. I have no answer but at this rate, we are doomed. It seems to be a problem that so far is being completely ignored. Personally I have begun a transition to thoroughbreds as it is possible to make large win wagers WITHOUT significantly affecting the odds. Food for thought – a trend that makes it impossible to survive.