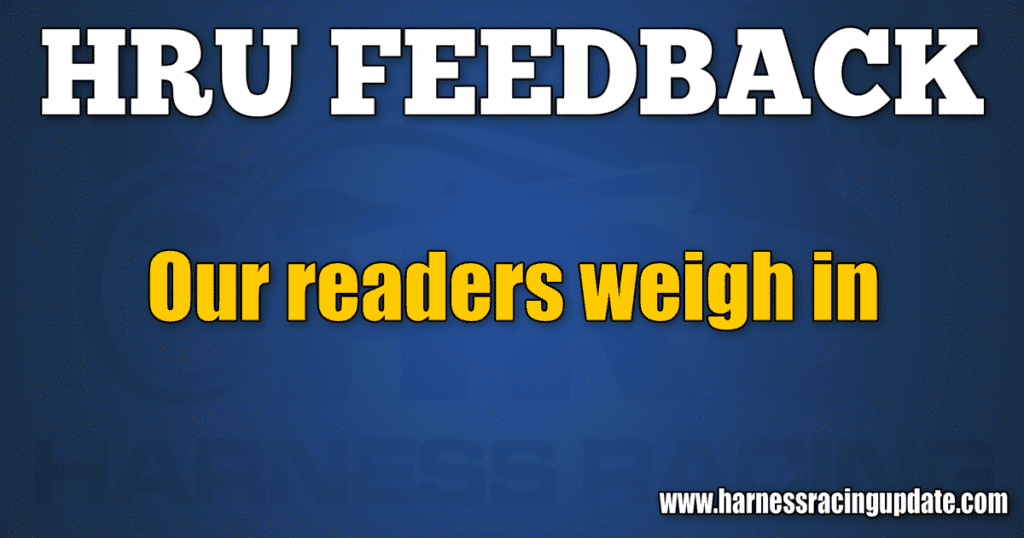 700-1 that Atlanta, Manchego and Plunge Blue Chip draw in together

Great coverage of the Lexington Sale and the race meet at the Red Mile. Thank you.

I do however have a problem with the way several tracks are now dealing with stake races. The same track operators that constantly cry out for a level playing field in dealing with drug use and trainer practices are less than honest or fair with race draws.

Case in point…. Sixteen entries and two elim fields for the Kentucky Filly Futurity have Atlanta,

Manchego and Plunge BC in the same division. Fair?

I asked a friend teaching at Dartmouth’ s Tuck Business School to evaluate probabilities in the likelihood of that happening with 16 entries. A simulation model they developed resulted in odds of over 700-1 in that possibility. That seems significant to me.

Additionally, some of these same tracks are handicapping race draws with assigned post positions. I assured the Manchego team we would draw post 9, 10 or 11 in the recent Moni Maker Stake at Hoosier. She had the 10. Honest, open draw? I doubt it.

So, either way, the track operators have a different way of creating their own version of a level playing field. One that serves their own self interest in maximizing handle.

Many people have spoken out about how horse racing is finished as a viable form of entertainment. There are more than likely a few in the sport who probably share this point of view, maybe more than less. And I feel those who we elect as leaders of our horsemen’s associations, agricultural ministers and racetrack operators have not really put forth any hard thought to how the industry can better its self. When I read what their thoughts or plans are to better the industry it just is the same old and used rhetoric like a hamster inside a wheel, and round and round it goes. I would like to see something along the lines of what is happening in Hong Kong. First equine vetting or healthcare would be controlled by the government. Every practicing vet could make application to the government for approval to practice on the racetrack grounds or at the trainers’ stables. Set fees would be set by the government and paid by them. This would create a documented file of each racehorse racing and when any new drug is administered could help connect the dots to why some trainers are winning more than their share and if anything other than what is documented shows up in tests could indicate possible masking techniques. This should eliminate also rising costs in vet work because of some not paying their bills. The vet is responsible in informing the authorities all treatments prior to entry and that would be final disclosure. Anything other than what the vet has indicated would mean a hold of all connected including the horse, and purse money. In other words, no entries would be accepted by the trainer or owner and the horse would be suspended until there is a resolution. The three-strike rule should be brought in with monetary fines and after the third strike both trainer and owner would receive lifetime suspensions. Let the owner and trainer fight it out in court and not be a burden to horse racing. Now there would be a cost to all this and this could be worked out. All horses for each race would be subjected to an entry fee and starting fee and the average vet bill per month for each horse would be deducted from the available purse for that race. Both the entry and starting fees and the average vet fees per starter would them be combined and withheld for the season. If at the end of each season what was charged and deducted from the purse account per race resulted in a loss or a surplus a correction could be put in place for the next season. This would be the industry doing something to better it’s self and make it self sustaining while reducing costs from a system that isn’t working.

When I go to the track alone, I often eavesdrop on conversations. I thought you would find this one particularly interesting. There were two young college types who were trying to understand what they saw on the tote board as the post parade began. At the end of the parade, the announcer said, “Less than a minute to post.” One guy said to the other, “I guess it’s too late to make a bet now.” At that point I told them that they still had a few minutes to bet. He asked why then did the minutes to post on the board say zero and the announcer said we had less than a minute? I told them that they just say that to get people to wager early. They asked me if I was going to bet and I said, “Yes and right now.” They followed me to the window where I put $10 to win on #2 who was 5-2 at the moment. As I was leaving the window they asked what I had done and what to say to the ticket seller in order to bet $2 to win on #2. So they made that bet and looked up at a TV that showed #2 was going to pay $7.40. We stayed near that monitor with the race about to begin. They immediately noticed the numbers of the horses displayed at the bottom of the screen. They were 8 1 2 3. But that was not correct. #8 never did actually get the lead but tucked in third, so the screen should have read 1, 2, 8, 3. They asked why the screen listed #8 in front, and I just told them that it was simply an error. I also told them that those placements were not updated in real time, a term they completely understood. In this case, the order was not updated until the field was past the half mile pole. As it turns out, beginners luck had prevailed and our #2 won the race. But much to their surprise, the win price turned out to be $5.40 and not the $7.40 they had expected. Of course I had to explain the concept of “late money” changing the odds. At that point, the expression on his face seemed to change along with the tone of his voice. He said, “So let me get this straight. When the tote board says zeros minutes to post, that’s not true. When the announcer says ‘less than one minute to post,’ that’s not true. The position numbers posted during the race are often incorrect. When the tote board says $7.40, it might be only $5.40. So how do I know that the track didn’t just lower the price so they would make more money?” I explained how there are multiple levels of computer controls to avoid such a thing, but I’m not sure he was totally convinced.

So once again I ask harness racing to wake up and stop saying things that are not true. Nobody believes that big zeros on the board, get real. Nobody believes there is less than a minute after the post parade in which to bet, so stop saying it. You can delay between the post parade and the start of a race as much as you want, but stop saying things that are just wrong. If today’s potential new bettors question your integrity, they are not likely to return.