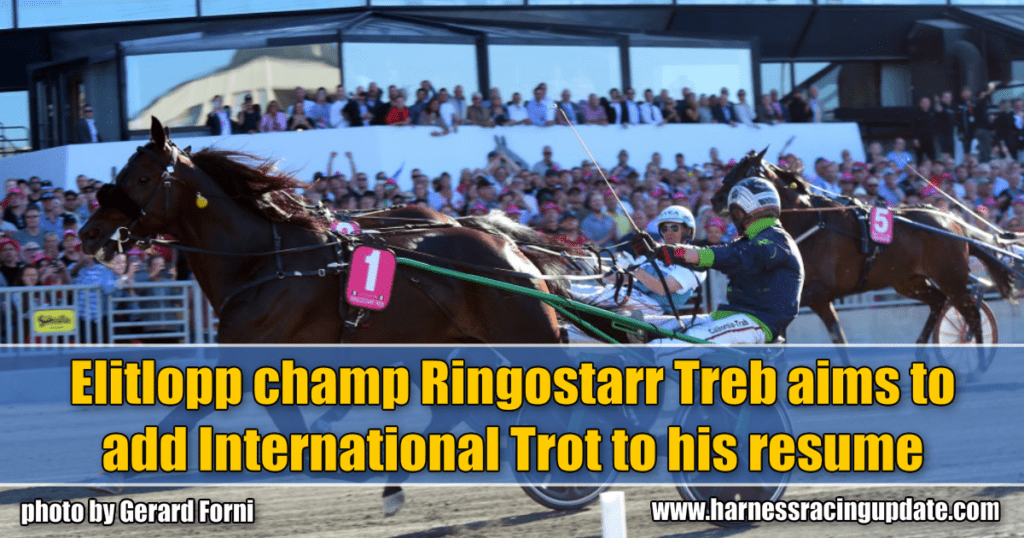 Trainer Jerry Riordan exuded confidence before last year’s International Trot at Yonkers Raceway, talking the talk and all but certain that his horse would walk the walk.

Italy’s Twister Bi lived up to the hype, leaving runner-up Marion Marauder of Canada and the rest of the outclassed field in his wake as he tore through the mile and a quarter in 2:22.1, nearly two seconds faster than the world record set at the same event in 2016.

This time, Riordan’s words are chosen more carefully. Any hint of bravado is gone.

Such is the respect he has for what he believes is an older and better Marion Marauder, a deserving 3-1 favorite who drew the rail in a field of 10 for Saturday’s contest. Such is the concern he has that Ringostarr Treb, a former $10,000 claimer who blossomed into the winner of this year’s Elitloppet, cannot possibly be at the top of his game.

The 8-year-old son of Classic Photo, who drew post four for driver Wim Paal as Italy’s representative, has made only one start since he repelled Propulsion by half a length in the Elitloppet at Solvalla on May 27. He was timed in 1:51, equaling the mark Timoko set the year before, in giving Riordan his first Elitloppet triumph.

That high was quickly followed by disappointment when Ringostarr Treb was sidelined for an extended period by an infection that developed after an injection to his ankle.

“He’s probably still got a little rust. I know physically he can do it, but it’s not the same as having those race miles in your legs,” said Riordan, an expatriate from Rhode Island. “I’m not there with him like he needs to be, but it’s the International. We’re here and we’re thrilled to be invited.”

Riordan is bidding to become only the third trainer to record International victories in consecutive years. He warns against dismissing his horse.

“He’s going to be a contender. I’m not worried about that,” he said. “But he can’t possibly be as sharp as he was this spring.”

The rise of Ringostarr Treb shows that the seemingly impossible can be possible when horses come into the right hands. When he was a youngster, he showed every sign of being relegated to the game’s lowest levels.

Although he made significant gains with maturity, he was anything but top shelf until he was transferred to Riordan’s barn last year at the end of May. He made his first smart move by assigning Heli Tarrimaa as the groom. The horse immediately responded to her care and her gentle touch.

“There might be grooms as good as her, but there is nobody better than Heli,” Riordan said. “He found a girl who loves him and really knows her work.”

The trainer decided that less would be more when it came to the equipment Ringostarr Treb had worn. He instead freed the trotter to do what came naturally.

“He’s a horse that doesn’t need any equipment. We took everything off of him,” Riordan said. “I think he had a few things he didn’t need.”

The veteran also responded to his new training environment in Halmstad, Sweden.

“It’s a super, super good place to train,” Riordan said. “Horses always get better when they come there.”

Yet another source of improvement came from the decision to have him compete at longer distances at the Hippodrome de Vincennes in France last winter. Ringostarr Treb, who tries hard no matter the circumstances, learned to race off the pace and apparently benefitted from facing such stiff competition even if he was no threat to win. It was akin to having a talented girl or boy compete in an older age group.

“I think in any sport you can train, train, train. But the only way you get good at the next level is competing at that level,” Riordan said.

He noted that Ringostarr Treb returned to Sweden significantly better than when he ventured to France. “I noticed a difference when I brought him home,” the trainer said. “He was a better, stronger horse.”

Riordan is quick to deflect credit for Ringostarr Treb’s emergence. He noted that standardbreds can be unpredictable in their response to different environments and training regimens.

“That is the wonderful thing about the horse business,” he said. “You can think you are doing everything right, and then some farmer comes out of the weeds and kicks your butt.”