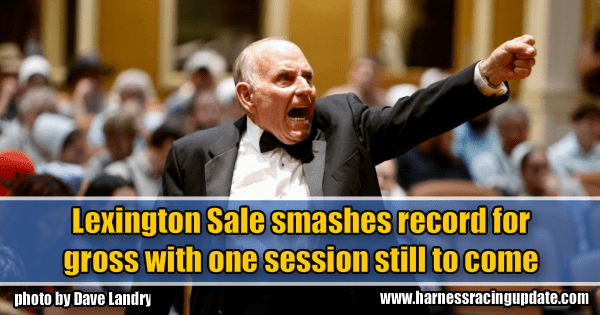 Friday’s fourth sale session, the total gross soared to record heights of just over $37 million, surpassing the record gross for the entire sale set last year at just over $36.4 million.

Despite a fourth sale session that was off from the fourth session a year ago, and the fact there is still one more sale session to come tonight, the Lexington Selected Yearling Sale has already set a record for total gross at $37,005,000.

After three sale sessions, the total gross was already some $3 million ahead of last year’s sale.

With 117 horses set to sell tonight, the all-time gross record will be shattered by a wide margin. Last year, the final session saw 87 horses gross $2,341,000 in total. With 30 more horses selling in the final session this year compared to last, the total gross will be up substantially over 2017.

Friday’s session saw one more horse surpass $100,000 to bring the total of $100,000+ yearlings through four sessions to 120, 17 more than the total number of yearlings that fetched six figures for the complete 2017 sale.

Pat Lachance of Millstone, NJ tied for the third highest priced yearling sold Friday, a Bettor’s Delight colt out of Dreamingofwichita named Walk It Talk It bred and sold by Kentuckiana Farms that fetched $70,000.

Rose Run Victoria, a He’s Watching filly out of Victoria Gallery almost fetched $70,000. Mark Harder of Freehold, NJ signed the ticket for the filly bred by Rose Run Farm of Sugarcreek, OH. The filly was sold by Spring Haven Farm.

Reid’s Preferred Equine still holds a wide lead over other consignors with more than $8.76 million in total sales from 130 yearlings. Hunterton Sales Agency is next with nearly $5,3 million and Kentuckiana Farms is third with more than $4.63 million in sales.