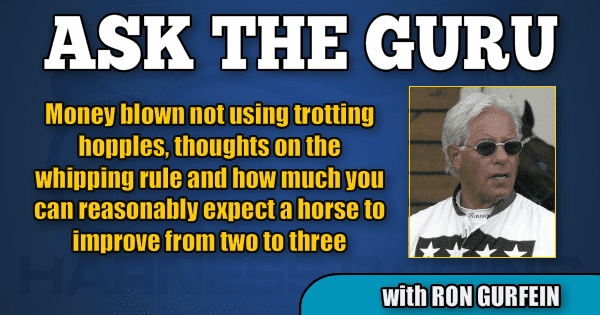 How much money I blew not using trotting hopples, thoughts on the whipping rule, how much you can reasonably expect a horse to improve from two to three and why standardbreds keep getting faster and thoroughbreds do not

Tidbits — I had a great dinner in Lexington with Mark Harder and my dearest employee Emma Pettersson the lovely young lady that cared for some of the best horses I ever trained including Hambletonian winner Self Possessed and the undefeated 2-year-old and prolific sire Cantab Hall.

By the way, the food all over Red Mile is now catered in-house and is better than ever. From the grandstand to the clubhouse the choices and quality are as good as any track in the country. The menu in the clubhouse changes daily with a variety of different themes.

Some Guru suggestions: the pulled pork barbecue in the grandstand is outstanding. As for the clubhouse dining experience you will have a myriad of fine selections. The shrimp cocktail appetizer is available daily. For main courses you may choose between, striploin of beef, rubbed pork loin, chicken and waffles, fettuccini alfredo and prime rib depending on the day. For the dessert selections they will have blueberry and apple pie, bread pudding and apple strudel among many other offerings. If the food is as good as it was the first week I am sure you will be very satisfied. I have it from some finicky eaters that the pasta was fabulous.

The big surprise of the start of the Grand Circuit was the winning effort of the Melanie Wrenn-trained Chin Chin Hall, a half-brother to Cantab Hall, driven confidently by husband Peter. The gelding lit up the board with a $31.60 mutuel. The horse had issues, complications from castration, and with a major loss of time was basically untraced entering the Bluegrass Stake. However it was no surprise to me because I watched him along with his owner David McDuffee all winter at Sunshine Meadows and was impressed with his gait and ability.

What an amazing Lexington Selected yearling sale. I predicted it would be the best sale in history, but never expected it to hit those numbers. I expect that it won’t be any easier to buy a top bred colt in Harrisburg than it was in Lexington. Best of luck to all of you that were final bidders. May you have a successful 2019.

To those that came away empty, this is the beginning. There will be many opportunities down the road.

Ray Schnittker asks: How much money did you blow in your lifetime by not using trotting hopples?

I am sure you will be surprised and dismayed by my answer, which is not much at all.

I have a theory about trotting hopples. I believe they significantly slow a horse down.

Therefore, they would have prevented some of my top horses from achieving the financial success that they enjoyed. None of the great horses I raced had much of a breaking problem at all. If I could name one that jumped over some money it was Self Possessed in the Beacon Course and the 3-year-old Breeders Crown. However, he would switch to the pace and I believe the hopples would have made him worse.

The bad horses I had that may have improved their earnings with the hopples were not fast enough to make a determination as to what I blew not putting them on. If you select the proper colts in the fall and they are making breaks in the summer they are sore and need veterinary procedures not trotting hopples.

Peter Blood ask: What is your opinion of the whipping rule?

There shouldn’t be any whipping rule. To me, it’s asking for an accident to happen.

Drivers are quick to learn it’s not smart throwing the lines at a horse. As a matter of fact it’s downright dangerous. The whipping rule almost forces you to loose line your mount. What do they pay judges for? If pylon rules can be discretionary, so should whipping rules. The judges are well aware when abusive whipping takes place let them make the call and let the driver do whatever he wants with the lines. Harness rules are becoming like the NFL, way too stringent. To quote Peter Blood (Pompano Judge) “Indiscriminate use of the whip, you’ll know it when you see it.”

Michael Carter asks: If you have a 2-year-old that can’t brush much and just goes along at a moderate pace, what are the chances that the colt will have some quick quarters at three?

As I told you when we met, there is a big difference in how I would answer that question now vs. 40 years ago. If it were 1970, I would say that there was a chance one of those bulky cold blood looking standardbreds could significantly improve from two to three. However from then to now our breed has radically changed. We have successfully bred coarseness out and lethal speed in to the point that 2-year-olds are catching up to 3-year-olds every year. It’s my feeling and I have said this before on this forum that there will come a day that all the world records will be held by 2-year-olds, most of which will most likely be destroyed in the process. All these things considered I would say that today’s colts are not likely to improve their sheer speed from two to three. A bigger stronger 3-year-old may live longer outside horses than he did at two but to me that’s the most you can expect.

Peter Wrenn asked: Can you tell me the reason the thoroughbreds race times have remained the same for many years and standardbreds keep getting faster?

The reasons for this are quite simple. We have bred a much finer and more athletic individual. We have removed the hubrail, which enables the driver to come further inside which in essence shortens the track. We have lightened the equipment that a horse wears to race by using synthetics as opposed to the heavier leathers. Last, but certainly not least, we have been through an evolution of new sulkies that keep increasing the production of speed. Of interest, two of my Hambletonian winners Continentalvictory 1:52, and Self Possessed 1:51.3 raced in a leather harness to a old fashion wooden Jerald sulky. Try to project their time in modern day equipment.

Thanks to all my readers for the kind words. It was wonderful meeting so many of you in Lexington. Please keep the questions coming in and have a wonderful week.
Have a question for The Guru?  Email him at GurfTrot@aol.com.