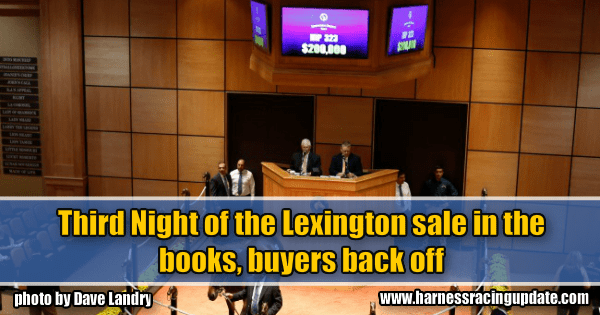 Buyers back off in third session, but sale still ahead by $3 million compared to this time last year

A bid of $200,000 for the Explosive Matter filly out of Baileys Breeze topped Thursday’s session.

After two blazing sessions of the Lexington Selected Yearling Sale, buyers backed off a little during Thursday’s third session at the Fasig-Tipton sales pavilion in Lexington, KY. Both the average and gross dropped when compared to last year’s third session, though the total sale gross through three nights is still up almost $3 million and the average is up 5.5 per cent when compared to 2017.

“The sale backed off a little bit, but I think last year we had a few surprises on the third night that we maybe didn’t have tonight,” said the sale’s co-manager David Reid.

The sale’s co-manager David Reid said it’s important to note that last Ken Jacobs paid $335,000 for Southwind Bugz, a Muscle Hill colt out of Missymae Bluestone bred by Southwind Farms and consigned by Preferred Equine. That price ended up being the second highest price of the entire 2017 sale.

“Preferred sold a trotting colt for $335,000 last year on the third day, and we didn’t have that this year,” Reid said.

This year, the highest-priced yearling sold during the third session was the Explosive Matter filly out of Baileys Breeze that sold for $200,000 to Reijo Liljendahl of Sweden out of the Winbak Farm consignment.

The Father Patrick filly out of Downpour named Torrent was the next highest priced yearling sold Thursday. Jim Glass, agent, of Stanford, KY bought the filly for $162,000 out of the Diamond Creek Farm consignment.

Pacing filly Perfect, an American Ideal out of Glowing Report was purchased for $135,000 by Willow Oak Ranch of Rogersville, TN out of Cameo Hills Farm’s consignment.

Then, three yearlings each fetched $130,000 — Extreme Edge, the Father Patrick colt out of Getinonthesecret bought by Bryan Montgomery, agent, of Cream Ridge, NJ from Spring Haven Farm, agent; Creature Of Habit, a Donato Hanover filly out of Habit’s Best purchased by Mel Hartman of Ottawa, ON from Cane Run Farm, agent and Barney Google, an Artspeak colt out of Oogle Google purchased by Ecurie CSL of Sorel-tracy, QC from Hunterton Sales Agency, Inc., agent.

Reid said, Thursday’s “crowd was fine. I would say the crowd would probably be better (Friday) night, but it’s just the way it was in the session.”

Despite the third session being a little softer than last year’s third session, Reid said it was still a solid night, “and we’ve got two more nights to go and we’re anticipating a strong finish.”

The fourth session of the Lexington Selected Yearling Sale will feature 161 yearlings. It begins tonight at 7 p.m. at Fasig-Tipton. For more information about the sale, please visit: http://www.lexingtonselected.com.