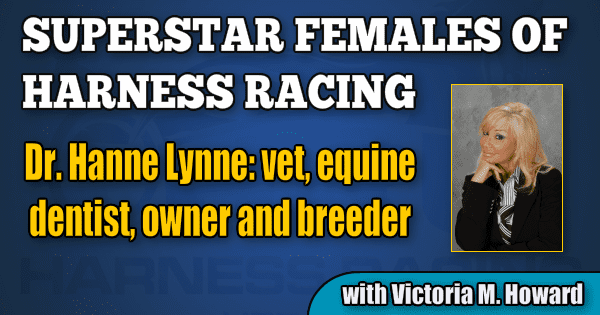 Unlike many women who were brought up in the business, Hanne Lynne was not. At age five, the Norwegian rode a Fjord horse owned by a neighbor while visiting at her grandparents’ summer cabin.

“Right from the start I was hooked and felt comfortable, but scared the daylights out of my grandma when she saw me on a full gallop,” Lynne said.

“When I was 13, my family moved to Oslo, where I got a job after school grooming horses at Bjerke Racetrack. The trainer was both champion trainer and driver, Gunnar Eggen. His training barn was full of champions, including multiple Derby winners. The star was imported Sugarcane Hanover who won the Breeders Crown winner at 3 and 4.”

Sugarcane and Eggen would eventually return to America to beat Ourasi and Mack Lobell in the March of Dimes International at Garden State Park.

“When I started veterinary college, time and money was limited as a student. I started a breeding project with two associates and bred a handful of trotters. Our first mare was a beautiful Lindy Lane daughter named Daisy Chip. Daisy produced a gorgeous Angus Hall colt named Bullchip (named by Bob Marks) who went on to win The Trotting Criterium and The Jarlsberg Grand Prix, earning close to two million kroner,” Lynne said.

“When Perretti Farms reduced their stock in 2011 I put an offer in for their stallion, Revenue. I was ecstatic when I got him for I had been in love with him ever since I first saw him in his home country of Sweden at three. After wowing everybody by winning at The Red Mile for John Campbell, Revenue went on to earn almost $2 million before he was sold to Perretti Farms to use as a stallion. There he sired world champion and Hambletonian stakes winner Market Share, plus millionaires Whiskey Tax, Hotshot Blue Chip and Melady’s Monet, in addition to world champions Break The Bank and Quick Deal.”

Lynne admitted that Revenue, who presently stands stud at his co-owners farm, is her favorite trotter of all time for he was not a world class trotter, but also intelligent, beautiful and classy. Even after years performing, he is the most gentle, trusting and loving horse to be around.

“Revenue won his last race in Lexington in 2004 — the third fastest mile in history at the time. John Campbell was quoted saying, ‘Revenue was the most intelligent horse I ever drove,’” Lynne said with a smile.

“Revenue also officiated at his co-owners, Per-Ole and Elin Tysland’s wedding. He stood by the fence watching the ceremony and joined in the celebration by bouncing around in the paddock.”

Lynne said racing in Norway is quite different than in the United States.

“We race over several different distances, we have no mile tracks, whips cannot be used, and there is extensive doping regulations with severe fines. Also, we have two breeds of trotters: the cold blood and the standardbred. We also use French sires for our breeding projects which gives us great scope to include their tough and enduring bloodlines into our stallion book, mixed with U.S. blood,” she said.

“Breeding and raising babies is not too different here than it is in the U.S., but we do use a lot more frozen semen so we can use top stallions from the U.S. and France. But of course we also breed from fresh semen from Norwegian and Swedish based sires.

“Our breeding season starts much later than in the U.S. because of our climate and darker days. Normally the stud book opens in April and we prefer our foals not to be born earlier than April or May.”

Lynne’s advice to horsepeople on equine dentistry is that, “it is essential to be aware of how important good dental health is for the horse. At the ages between 1 to 4 1/2, we ask the most of our horses. During this time they shed 24 baby teeth and grow 36-42 new ones: most of massive size. Pain can arise from this, along with development of sharp enamel ridges in the cheek and tongue area. It is important to have regular check-ups to make sure the horse can chew properly and are pain free.”

Doing what she was born to do, Hanne Lynne spends most of her day in her equine practice performing dentistry before tending to her breeding stock, yearlings, and training her colt Whatdoesthefoxsay.

Perhaps he will be the next Revenue.