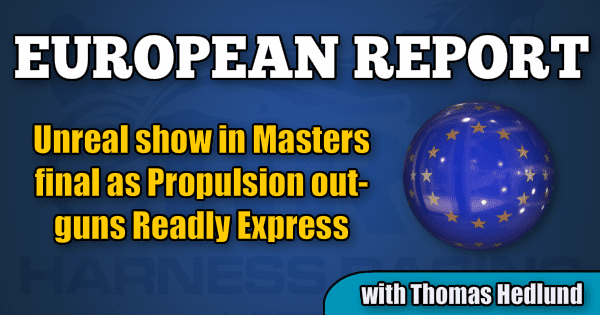 The final of Trotting Masters in Europe was held Sunday afternoon at Östersund’s racetrack, Sweden.

Two of the best older trotters in the world showed up for a battle that the racing fans hardly will forget. American bred Propulsion (Muscle Hill—Danae) ended a successful season where he dominated the big race circuit as undefeated from the month of June and forward.

Prix d’Amérique winner Readly Express was the bettor’s choice in UET Trotting Masters Final ($442,800) and Timo Nurmos, who got to pick post as number two, chose lane three behind the gate, while Propulsion started from post two. That became one of the most crucial factors regarding the outcome of the race. Örjan Kihlström behind Propulsion had one target when the car left the field of 12 horses and that was to keep Readly Express on the outside of, or behind Propulsion. His mission succeeded.

Johan Untersteiner sent Cyber Lane (Raja Mirchi) to the front quite surprisingly. Stablemate Pastore Bob started from post one and the debate was about whether he should keep the front position or let anyone of the two big favorites, Readly Express or Propulsion, take the lead. The answer was that Cyber Lane opened too quickly from post five and Untersteiner had no thoughts of letting anyone else control the game.

As the race went running, Kihlström was forced to take the first initiative behind Propulsion and after 500 meters the son of Muscle Hill landed outside of Cyber Lane.

Björn Goop had the same thoughts where he sat in position third over. He wanted to move Readly Express forward to make contact with leader Cyber Lane, but Kihlström made the move before him and the Masters Final’s outcome was, with all facts on hand, settled at that point.

Readly Express (Ready Cash) made his move from third over and attacked three wide with 1,500 meters to go in the 1.3 miles long race, but Goop also understood that he most probably had to let Readly Express do the job outside of Propulsion during the last 5/8 of a mile. A tough task, even for a horse like Readly Express.

Propulsion had beaten Cyber Lane with 200 meters to go and with Readly Express on the outside, still three wide, Kihlström seemed to have everything under control in the home stretch. And the 7-year-old son of Muscle Hill sprinted away from the opponents quite easily and won UET Trotting Masters Final in mile rate 1:53.1.

American bred Milligan’s School (Yankee Glide—Tori Ann), trained by Stefan Melander, has found high level this summer and fall. After a trip shadowing Propulsion the 5-year-old finished strongly on the inside and took the silver medal ahead of a heroic Readly Express.

Propulsion’s season now includes victories in Norrbottens Stora Pris, Årjängs Stora Sprinterlopp, Hugo Åbergs Memorial, Åby Stora Pris and UET Trotting Masters Final. Beside this, Daniel Redén’s trainee can look back at a year where he finished third in Prix d’Amérique and as a runner up in Elitloppet. In total, Propulsion has earned $1,153,150 during 2018. In 62 lifetime starts, he has won 31 times and earned $2,455,931.

”What a horse he is. He hadn’t started in five weeks, but still he delivers a performance like this, from outside the leader. Propulsion will not race any more for a while and maybe this was the last time you’ll see him on the track. At first, we’ll let the market’s demand for his services as a stud decide how the future will be. I’ll train him as usual and if everything feels normal, he might come back and there are some big objectives awaiting next year if I feel that he wants to race again,” Redén said.

Propulsion’s breeder Elizabeth Caldwell follows her breeding with great enthusiasm from the other side of the Atlantic Ocean.

”Propulsion has been on quite a streak in his last several races,” Caldwell said. “Overall, he’s had an incredible year. He seems to just keep getting better. His ability to race over different distances is impressive and Örjan drove him so well today. Propulsion shows incredible power, even at the end of his races, when most are tiring, he starts pulling away from the others. It’s been fun watching him race and I hope he continues to do well! Congratulations to the owner Stall Zet.”
Propulsion replay