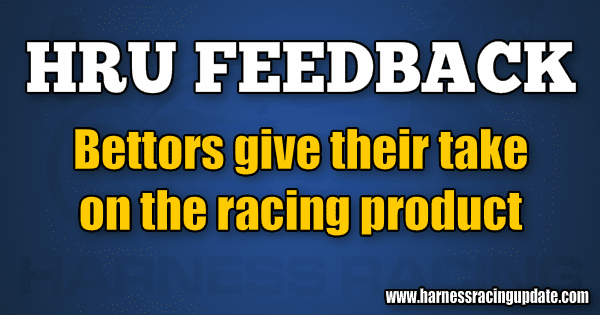 Pulling no punches on pulled shoes

Last week Crazy Wow won a major race in Canada. The next day I read in HRU that Melander pulled his shoes prior to racing him. Why is the betting public not made aware of this important equipment change? When a horse’s shoes are changed, we are advised of that change, but removing shoes, crickets. Hopefully, someone will read this and make the appropriate call on this injustice

When will things change?

There is a constant amount of talk throughout the sport in North America with regards to the minimal or slap on the wrists that are handed out to offenders. If the authorities who are supposed to police and govern the sport are not doing anything about it, then why are not track operators not calling these same authorities to task about what is going on? Yes, we all understand and believe in innocence until proven guilty, but when the lab comes back with a drug overage, and the drug is on the banned list why is it that the offender has a week to answer back to the judges to accept their judgement? Or drivers not putting in any effort to try and win or finish in the money? If I operated a track, I surely would not want my customers talking about how I don’t care about them, my customers who fuel the sport and support my track should deserve better. If the customers’ complaints keep falling on deaf ears the sport will not survive. Even the occasional bettor can easily connect the dots from breeder to the betting window, and these same bettors with little knowledge can see the breaks in what should be a solid on track product because what they have just witnessed with their eyes. The racing public, is their voice, is it too small or do the track operators and governing authorities really just not care? The fan and honest horsemen are trying to keep the domino tiles standing, but this lack of actions by track operators and authorities in my opinion will lead to the Domino Effect, when one tile falls they will all follow.

Reply to “Can you hear me now?”

The elimination races are typically boring and unbettable. The favorite goes to the lead, slows the pace to a crawl and the race is over. The stars shouldn’t have to race in elimination races. They should be given a bye based on some kind of point system. Maybe take a cue from golf’s FedEx cup point system. The top 4 point earners get a bye into the final. The rest of the field race for the remaining spots. This would make for more exciting eliminations and finals. You could also have some kind point system to qualify for the Breeders Crown.

I don’t have the time to figure this out, but someone out there does. There has to be a better way to increase interest. We can’t keep doing the same thing. Things are changing faster than ever and people get bored easily.

Tracks should space out big races also. Why have all big races on one night? The tracks would probably get a bigger bang from having three big races on three separate nights then one big night. Have the Breeders Crown for one big night. For a big race the track could give customers a card with a horse’s stats for a big race. The customers with the winning horse could redeem it for a hot dog or something. We have to get them involved. Have a website link available so patrons can use their phone to learn how to read a program or access top picks and put that on the front cover.

The most important thing is to try something, you never know what is going to work. By trying eventually you WILL find something big. The effort needs to be made.

Pandolfo on outside posts on half-mile tracks

When Jimmy Freight drew post 8 in the Messenger Stakes Final, it put him in a difficult situation. Even though the 3-year-old had won his elimination race impressively, the Messenger has an open draw, and post 8 at Yonkers is winning at 4 per cent. And, that number might be somewhat inflated because of the mile and a quarter trot races. In the one-mile races, post 8 is brutal.

And so it started the usual debate: maybe the winner’s of the eliminations should be able to choose their own post for the final. Well, that’s been tried before. When they used it for the Hambletonian for several years in a row, it resulted in some of the most boring Hambletonians in the history of the race, as the heavy favorite gunned to the early lead from the inside and the race was over.

Personally, I think that all elimination races should be non-betting events, and all finals should have an open draw.

But I have to say, when I saw all of the various opinions about the Messenger, I had to laugh. To use an old saying, here we go again, putting the cart before the horse. The problem has nothing to do with how you draw the entries, or even how you race the eliminations.

The problem is the speed and post bias! I guess I’m older than a lot of folks but I remember plenty of horses winning stakes races, and handicap races, from post 8 at Yonkers, and other half-mile tracks. I know, because I used to bet post 8 a lot… before the speed bias started. Post 8 wins about half as often as it did when we raced in wood bikes.

Should we try to fix the problem by creating another problem? Why not just fix the speed and post position bias? Race them longer than a mile, or start the race farther back, or go back to the slower bikes, or something. But let’s not continue to make things worse, and believe me, if you let the winner’s of the elimination races pick their post, they’ll get post 1 and the race will be over sixty feet after it starts. And the fans will continue to find some other sport to get them excited.