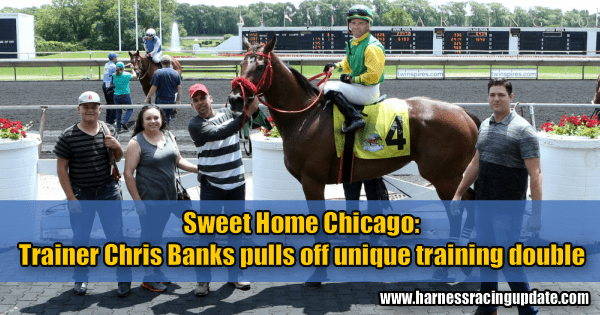 Despite declining harness racing opportunities in Chicago, trainer Chris Banks found a creative way to stay put and still race horses — he earned his thoroughbred trainer’s license. On June 28, he accomplished what many think is an unprecedented feat in Illinois — winning both a thoroughbred race at Arlington International and a standardbred race at Hawthorne.

Trainer Chris Banks has found a unique way of coping with the substantial loss of harness racing opportunities in Illinois.

This year, starting in January and continuing through September, he has been training both breeds at the same time and from May onward he has been racing thoroughbreds by day at Arlington International Racecourse and standardbreds by night at Hawthorne Race Course.

Coady Photography | Sperling’s win on June 28 was the first for Chris Banks as a thoroughbred trainer.

On June 28, the 35-year-old trainer accomplished what might be an unprecedented feat in racing when he won the first at Arlington with the 5-year-old mare Sperling and the sixth at Hawthorne with the 3-year-old gelding Vegas Bomb, both owned by his father Larry’s Banks Racing LLC.

“In my 39 years of race calling I cannot remember such a feat happening,” marveled Hawthorne track announcer Peter Galassi. “I know for sure this is a first in Illinois and, until someone proves us wrong, it might be the first time it has ever occurred.”

It also was Banks’ first thoroughbred training victory. He was winless in three starts at last fall’s Hawthorne thoroughbred meeting but heading into the final month of the current Arlington meeting he had an impressive two triumphs, four places and one third in 10 starts.

When the Hawthorne harness meeting simultaneously hit the homestretch his vital statistics were one win, two places and four shows in 34 outings.

In the last two months, Banks has scaled down his stable at the Hawthorne harness meeting to one horse — an unraced Sportsmaster colt named Option To Buy — because, unlike last year, the standardbreds won’t be back there until the 2019 May through September meeting begins.

This year there was a six-week winter harness meeting in January and February before the track held its March 30-April 29 spring thoroughbred meeting, but the quick back-and-forth conversion of the racing surface to accommodate both breeds proved to be extremely difficult so the winter meeting has been eliminated.

That leaves only 71 nights of harness racing on the Chicago circuit versus 118 this year. It is light years removed from the situation that existed from the late 1960s through 2015. Then, there was racing year around and, starting in 1988, for 12 straight years the Chicago tracks raced a combined total of 400 or more programs yearly. In 1995, programs at Hawthorne, Maywood Park, Balmoral Park and Sportsman’s Park numbered 516, an all-time high.

Now-defunct Sportsman’s, which had been a destination track from the time it began harness racing in 1949, abandoned the sport in 1999 and the sister tracks, Balmoral and Maywood, which had evolved into year-around venues, went out of business following their 2015 meetings.

Banks’ father was a driver/trainer and Chris grew up in Cicero, the near southwest suburb of Chicago where Sportsman’s was located a block away from Hawthorne in the adjoining suburb of Stickney.

“As a young boy I’d always come to the track,” he said. “Since age 12 on I was around horses. After graduating from high school I went to Morton Junior College for a year and then I started helping my father train. When I was in my early 20s I got my trainer’s license.

“We’ve had up to 22 horses. I’ve had a few trotters but the majority have been pacers. Love This Place was definitely one of the special ones. She was purchased privately in Iowa for $5,000 late in her 3-year-old season. I made a couple hundred thousand with her in 2 ½ years and then she went under the care of James Ellison and ended up making around $405,000 (during her career).”

After Balmoral and Maywood ceased racing, Banks was faced with a dilemma. The purse money at Hawthorne for less than five months of racing wasn’t enough for him to make a living. But he didn’t want to hit the road to race out of state because that would have meant leaving his wife, Karen; their sons, 5-year-old Christopher and 4-year-old Charlie; and his 16-year-old twin stepdaughters, Dahlia and Elija, for several months.

Banks had always been interested in thoroughbred racing but, until then, training the runners never crossed his mind.

“I said to myself: ‘I want to stay here and I want to train horses; there’s got to be away to get that done,’” he recalled. “I talked about it with my father and he said: ‘I’ll invest.’

“I went through the licensing process and had to jump through some hurdles, but we got it done. Last October, I was licensed.”

Banks soon learned that conditioning thoroughbreds is much different than working with standardbreds.

“It’s because of the way they are put together,” he explained. “The standardbred is a very sturdy horse. The bone density is stronger. The hooves are solid. They can have 30-35 starts a year on a firm track.

“Thoroughbreds are powerful animals but they have thinner hoof walls and they can’t be worked as hard. At first, I thought I wasn’t training them enough. That was the big adjustment, letting the animal tell me what he or she wanted. Nutrition is another thing. The thoroughbreds are heavier and you have to adjust feeding to their body weight; you give them much more. Now, I’ve got everything down.”

Another difference is in working the horses.

“With my harness horses I can do everything from A to Z,” Banks said. “You learn a lot about the horse jogging the horse. You pick up tendencies from sitting behind the horse every day and you notice changes. With the thoroughbreds you have to rely on your exercise rider. Fortunately, I have a great team. They understand what I’m trying to accomplish.”

Banks’ budding success story is somewhat reminiscent of that of Roger Stein in California. Stein became a trainer in 1979 and conditioned harness horses through the mid-1980s. At one point, he won training titles at 17 straight meets. In 1987, he switched to thoroughbreds and continued to be very successful. His most notable runner was Southern Truce. Stein claimed him for $16,000 in 1991 and he went on to become a two-time Grade 1 winner.

However, Banks intends to continue training standardbreds. “Last year, I had a good meet at Hawthorne and won 10 or 11 races,” he said. “We were getting aggressive in buying horses and I sold them afterward. I was gearing up for training thoroughbreds and I didn’t want to purchase any more (standardbreds). So I didn’t have any fresh stock for Hawthorne. I paid $2,500 for Vegas Bomb when he was unqualified and sold him for $3,500 after he won.

“We have three thoroughbreds racing and Option To Buy is my only harness horse. He had an injury that set him back 13 months so he’ll miss his 2-year-old campaign. When we’re done with this meet at Hawthorne we’ll send him to Leon Walker in Springfield (to train at their fairgrounds there). With no winter racing I don’t have to bring him along as fast.”

Banks plans to acquire more standardbreds before Hawthorne resumes harness racing in May, but until then he will concentrate on his thoroughbreds and add others to his current three-horse stable.

Racing at both Arlington in the northwest suburbs of Chicago and Hawthorne in the near southwest has meant ultra-long days and a lot of time behind the wheel. Banks gets up every morning at 4 a.m., drops by Hawthorne to feed Option to Buy and clean his stall; drives 50 minutes to Arlington to train his three horses; and then comes back to Hawthorne around noon to jog his standardbred.

The day that Sperling won at Arlington and Vegas Bomb won at Hawthorne was especially hectic because at the time Banks had his harness horses at a training facility in Crete, a distant southern suburb of Chicago.

“I rushed over to Arlington to get Sperling ready for the first race at 1:20,” he said. “I wanted to be in the winner’s circle picture with my first thoroughbred winner but then I had to get back to Crete to get Vegas Bomb and van him to Hawthorne. The gentleman there had him loaded and ready to go. In harness there’s a four-hour detention barn so you have to be there by a certain time. I just barely made the deadline.”

Vegas Bomb’s race got off to an inauspicious start.

“On the first turn a horse made a break and pushed him wide,” remembered Banks. “It was like getting mugged out of the gate in a thoroughbred race. (Driver) Casey Leonard told me he was lucky to stay upright. And then another horse made a break and we ended up about 25 lengths behind. He had road trouble all the way to the top of the stretch.

“But once Casey got him geared up he came on. When (announcer) Peter Galassi saw him coming he got excited. There was no stopping this train!”

Vegas Bomb won with a couple of lengths to spare, ending Chris Banks’ long racing day… a day like none other in Illinois racing history.