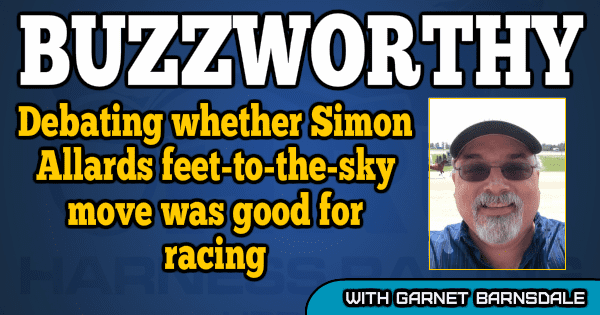 There’s a good chance that by now, you’ve seen or heard of driver Simon Allard’s “feet to the sky” celebratory winning pose coming to the wire as he was victorious in last Sunday’s Gold Cup and Saucer at Red Shores Charlottetown.

For the very few reading this that may not have seen or heard about it, Allard was heading to the finish a sure winner, guiding Somewhere Fancy on a clear lead with no rivals closing ground. A few strides from the wire, Allard leaned back and thrust both feet straight up in the air which put his body on a 90-degree angle for a couple of seconds.

The celebration set off social media almost immediately, with opinions seemingly divided for and against, with the pros citing the gesture as being “fun” and keeping it interesting, and many of the cons citing the act as unsafe.

Here is a sampling of some of the reaction:

“There’s a time and place for this stuff, but this wasn’t one of them,” Sandy Kunkel said. “Not classy at all.”

“He does a great job of keeping it interesting,” Dolores Basilone Case countered. “The sport needs some fun and positivity.”

Trainer Paul Kelley concurred. “I thought it was great!! Good for the game!”

Dennis Paul disagreed. “I understand the excitement of winning such a coveted race as the Cup & Saucer, but that winning photo is degrading to the sport,” he opined. “It flaunts ill regard for safety, depicts a circus type show for new fans and for me was a classless act. I applaud the Allard family for the win and contribution to the Island’s signature race, but I also hope the judges nail down hard for a punishment that will deter any others who wish to be a clown.”

Trotcast’s Ryan Macedonia disagreed and posted a video of the race with this introduction: “Fun in Harness Racing? Team Allard seems to be one of the few actually having it! Congrats on the winning the best race to watch live in North America!!”

That brought 67 responses, again some in favor and some vehemently against such as Eric Mareki who posted: “I love celebrations and showmanship our sport definitely needs some excitement but there are classy and fun celebrations and distasteful and vulgar ones and, in my opinion, only this falls into the latter category.”

Tracy Reed was taking a “no harm no foul” approach with her comments. “Rock on Simon Allard,” she exclaimed. “People should be allowed to celebrate and show off a little. Have fun. Live in the moment. No one was hurt or made fun of or bashed.”

Mike Mancini agreed. “’Simon Allard is a professional athlete that’s driven thousands of horses,” he began. “He is confident in his ability to handle these horses. So please, it was not dangerous, it was not distasteful so just let the connections celebrate the win. By the way, the crowd loved it, the place was electric from the looks of it. Also, if you’ve never driven in a race then you should not be judging a driver’s capability and strength.”

Brandon Bragg wasn’t so sure. “I’m just saying,” he began. “If he would have flipped out of the bike nobody would be saying, ‘Oh, he was just having fun.’”

You can see by now that – if nothing else – Allard’s “feet to the moon” pose got lots of attention and reaction, including one from his brother, winning trainer Rene. “One day all of us will be dead,” he posted. “So, opinions won’t matter then. Live the moments at the maximum. That was a dream come true. So what, he got excited.”