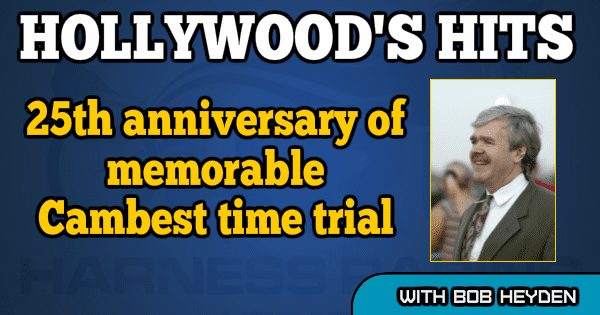 He sired winners of over $140 million — included in there is the 1999 Triple Crown winner Blissfull Hall and millionaire mare Marnie Hall.

As a freshman, he was edged out in the $1 million Woodrow Wilson by Die Laughing.

As a sophomore, he was up against it as part of one of the best sophomore classes ever which featured a pair of Horses of the Year — Precious Bunny and Artsplace. Also in there was the aforementioned Die Laughing and Nuclear Siren.

Cambest stood at Walnut Hall LTD and he was buried alongside such Walnut Hall luminaries as Garland Lobell and Volomite.

Harness racing on the cover of SI

There have been four Sports Illustrated covers featuring harness racing and all were within the same summer month period of late July-August. In 1956, the first featured Adios Harry with Luther Lyons. In 1957, the second featured John Simpson, Sr. posing with Hickory Smoke prior to winning the Hambletonian that year. In 1959, the third featured the inaugural Roosevelt International about to kick off. In 1968, nine years and two days after the International cover, Nevele Pride made it. That is now a touch more than half-a-century ago.