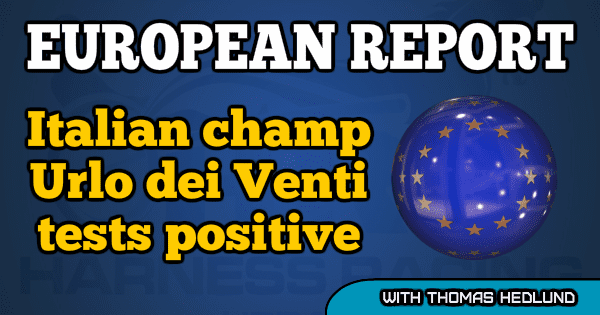 Italian-bred Oslo Grand Prix winner Urlo dei Venti, who also won The Lotteria in Naples earlier this year, tested positive for doping after the race in Norway in June.

Urlo dei Venti was found with the substance triamcinolonacetonid in both blood and urine samples and the horse is now suspended from racing for at least 90 days.

It is important to note that it’s so far the A-test that has shown this particular substance and the B-test has been sent to France for analysis. If that sample shows the same result as the A-test, Urlo dei Venti will be disqualified and the owners have to give the price money of approximately $185,000 back.

In Finland, the 6-year-old gelding got everything but an easy task to handle when tough opponent Pastore Bob early found the lead and was allowed to keep the pace slow during the first half of the mile race.

Driver Kenneth Haugstad made the decision of leaving third over for first over after 500 meters and from that position, Heavy Sound disarmed leader Pastore Bob in mid home stretch.