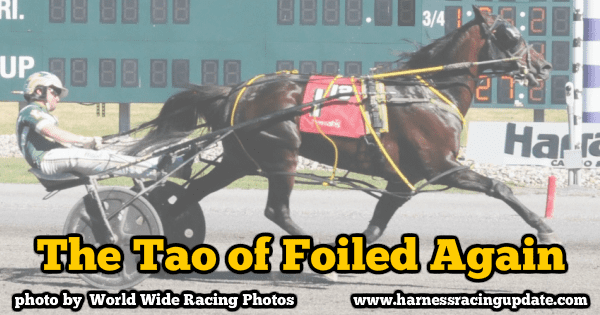 The Tao of Foiled Again

As the richest standardbred in history celebrates his 100th career victory, his connections give thanks for the incredible meaning Foiled Again has brought to their lives.

Long before Foiled Again recorded his 100th career win with a victory Sunday afternoon (July 8) at Harrah’s Philadelphia, his trainer Ron Burke was philosophical about what was then an impending milestone.

“It’s probably the last benchmark he will set,” Burke said. “After that, there’s nothing else. He’s not going to reach $8 million… We’ll race him until the end of the year and it’ll be the end.”

Foiled Again, the richest standardbred in history with earnings approaching $7.6 million, is 14 and will face mandatory retirement at the end of 2018.

Even before the son of Dragon Again—In A Safe Place recorded his 100th victory, Burke was already musing about what winning that many races means to the horse’s legacy.

Regular pilot Yannick Gingras was in Foiled Again’s bike for the milestone victory — a gate-to-wire score from the rail in the 13th race, a conditioned start the gelded pacer won by 1 ½ lengths over Perseverant in 1:53 with a :27.3 final quarter.

“The same thing has kind of been going on for eight or nine years now, that he’s been impressing us. It’s kind of hard to believe, but at this point nothing surprises me. It’s kind of getting emotional because we know this is his last year, no matter what, unless Ronnie takes him to Western Canada, where he could still race,” Weaver said, laughing, referring to the fact horses can race into their 15th year in British Columbia.

Weaver — who owns Foiled Again with Michael Bruscemi, Burke Racing Stable LLC and JJK Stables LLC — said he owes a lot to Foiled Again, who was bred by Barbara Matthews of Allentown, NJ.

“He kind of put us on the map,” Weaver said. “That used to be our game, to buy racehorses off people and try to do well. We’ve kind of transitioned into the yearling game, more with Sweet Lou, Southwind Frank and Mission Brief, but he kind of allowed us to make that transition. He’s everything for us. We all owe him a lot. He’s a special horse.”

The owner said what he loves about Foiled Again is the pacer is, “tough and non-descript. You look at him and, you know, he doesn’t stand out… He was a $20,000 yearling, average size, average everything, except his heart.

“I used to keep a list of people that would park him. People took their shots at him. They may have won that battle, but… Foiled, he put a lot of them away. I used to think, ‘This is Foiled Again and you’re parking him, what are you doing?’ Then two weeks later, that horse is off for nine months and we’re still battling. So it’s been kind of tough, but kind of fun.”

Though it took 12 starts and nearly six months for Foiled Again to go from his 99th win to his 100th, he still finished in the money in eight starts and on the board in five, including second-place finishes three times in the six starts prior to finding the winner’s circle. Foiled Again has earned over $25,000 this year and made just shy of $90,000 in 2017 in 30 starts in which he posted a 7-3-2 record.

Weaver said racing the gelding into his 14th year hasn’t always been easy.
“It’s a tough spot for Ronnie. People have been saying for the last four years, ‘Retire him, he’s earned enough,’ but we just defer to Ronnie and whatever he wants to do. He’s got 300 horses and he’s got a good bead on what every one of them does and now people are saying, ‘Greatest horse’ and ‘he’s racing well,’ but I’d get messages on Facebook from people saying, ‘You’re an embarrassment to the game, what are you doing?’ Then the next week, the horse would win and it would be, like, ‘How about now, buddy?’ He still makes $100,000 or $150,000 a year. It’s not that we’re doing it for the money, but there are people that are 55 years old and could probably retire, but they are still making $150,000 and they are still working. It’s not like it’s chump change.”

Weaver stressed money is in no way the prime motivator and Foiled Again has traveled the continent meeting his fans.

“We shipped to the Gold Cup and Saucer where they race for a smaller purse. We have shipped to county fairs,” Weaver said. “It was letting people see him. Last year, I think he went to 15 different tracks or something. We sent him all over.”

Though he hasn’t stopped to reminisce about Foiled Again’s career just yet, Weaver said, “it will be fun, one of these days, to pull up all the replays of him. I’m sure someone will put something together.”

When the current connections bought Foiled Again early in the gelding’s four-year-old season, they never expected him to get better every year for the next five years.

“Finally, at eight or nine, he started to go down a little bit, but he’s just an incredible horse. It’s been fun. I love him, the whole family loves him. He’s really changed the trajectory of our barn,” Burke said. “He’s done it all in conditioned races. He’s never been in a claimer and most of them have been stake races,” Burke said. “I give the horse all the credit in the world. I don’t know if we’ll ever see another horse like him that still, at 14, could race at the top levels at Yonkers and be competitive.”