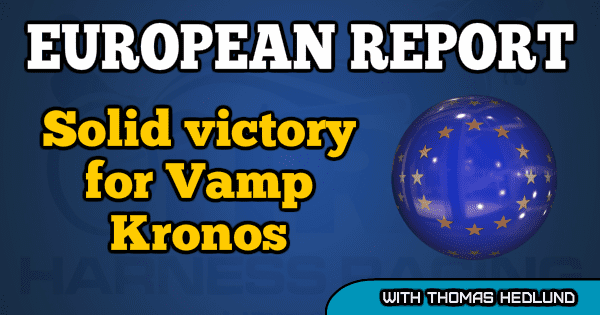 The $160,000 Stosprintern for 4-year-old mares were held at Halmstad racetrack, Sweden on Saturday afternoon and it was a great success for Jerry Riordan-trained Vamp Kronos (Ready Cash).

Björn Goop steered Vamp Kronos from post position 4 and the duo carried quite a heavy weight as major favorites. He turned out to be a deserving favorite as the race never was not that exciting.

Vamp Kronos is without hesitation one of the best 4-year-olds in Sweden, which the opponents were aware of when Vamp Kronos reached the front position after a quarter of a mile.

Rose Mary got a great trip and slipped through and tried to challenge in the home stretch, but Vamp Kronos had a lot of power to give and Goop looked relaxed behind Riordan’s trotter who trotted the mile in 1:55.2.

”She just has everything — great confirmation, great head and technique; 1:55.2 is a solid performance”, said Riordan, who continues to win big races in Europe.

In May, Riordan celebrated, most certainly, his biggest moment in the sport when Ringostarr Treb won the Elitloppet and the U.S.-born trainer presents his high-quality horses in best shape when they enter the track.

French top driver and trainer Jean-Michel Bazire celebrated his 6,000th victory in Vichy, France, on Saturday afternoon. Together with Courchevel, Bazire reached an impressive milestone in French trotting and a moment later, he steered his own Aubrion du Gers (Memphis du Rib) to victory in the $140,000 Grand Prix du Conseil Municipal.

Aubrion du Gers won the Masters final in Europe last year and is definitely one of the best trotting geldings in the world. As a gelding, Aubrion du Gers is prohibited to race in most of the biggest races in France, but when opportunities are given, the 8-year-old is good enough to challenge all the best horses on the continent.

In Vichy, Aubrion du Gers came home in mile rate of 1:54 over 1.9 miles. It was impressive and a great day for a great horseman. Jean-Michel Bazire deserves to be celebrated.