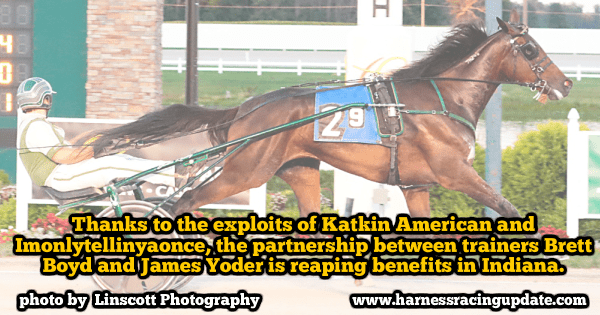 Thanks to the exploits of Katkin American and Imonlytellinyaonce, the partnership between trainers Brett Boyd and James Yoder is reaping benefits in Indiana.

Last year, Michigan horseman Brett Boyd needed a driver when he shipped two horses to compete at Running Aces in Minnesota. He ended up striking a friendship with trainer/driver James Yoder that has yielded big results this season at Hoosier Park Racing & Casino. The most recent success came Friday (July 6) when Yoder steered the Boyd-bred and owned Katkin American to a dominating victory in the $83,000 Indiana Sires Stakes final for sophomore trotting colts.

“I was very impressed with how he handled a horse. He was very confident, very cool,” said Boyd, a third-generation horseman and former Michigan Harness Horseman’s Association president. “He’s just a really good, genuine kid. We hit it off right away.”

The relationship developed when late in 2017 Yoder headed south to winter in Florida. Boyd asked the 23-year-old to take older pacer Bestinthebusiness with him to keep the veteran racing. When the weather in Michigan turned nasty, he reached out and asked Yoder if he would be interested in taking two Indiana-sired stakes horses to train. The first was Katkin American, an unraced son from the first crop of Guccio. The second, a freshman pacing filly from the first crop of Tellitlikeitis named Imonlytellinyaonce.

Yoder, the son of trainer Verlin Yoder, is no stranger to quality trotters. He has worked in the family stable, helping campaign millionaire and multiple Indiana Sires Stakes final winner Natural Herbie among others. Now he is looking to find his own niche in the sport he loves. The younger Yoder trained the two Boyd Racing entries this winter along with a small stable of 11 horses he currently campaigns at Running Aces. Now splitting time between Indiana and Minnesota – he is sixth in the Running Aces driver standings and has hit the board in nine of 19 starts as a trainer – he turned over the pair to his father to condition, but makes sure he is back in the Hoosier State to drive them.

“I started back with him the first of the year. He trained down really good at times, but he had his quirks. We tried to qualify him in Florida. He ended up making a break, but he trotted a back half in :56 and won,” Yoder explained. “Around the first of April he started training with Natural Herbie. He started showing a lot of promise. The last couple of months he started to show a lot of speed.”

It came as no surprise to Boyd that the gelding had talent. He had campaigned the trotter’s dam, Katkin, a Michigan champion that earned $126,435 on the racetrack. Katkin American is the second foal from the mare, a half-brother to 23-time winner Katkin And Coke.

“He trained down very well last year, but he had soreness issues. We could tell he was just loaded with talent. He just floated over the ground. He’s just a natural,” the breeder said of his trotter. “He’s better gaited than his mother. She was one of the most honest horses I ever had. I raced her in Canada one night and four geese walked out in front of her. She never missed a beat and just kept trotting.”

Considering that he lacked any racing experience coming into the season, Katkin American’s efforts have garnered a lot of attention. He trotted in 1:54.2 his first time behind the gate, competing in a $20,000 Indiana Sires Stakes elimination. In the subsequent $75,000 final he made a break racing to three quarters and finished ninth as Breeders Crown champion Fiftydallarbill won in a time of 1:53.4.

After cruising to victory in an overnight for ISS eligible trotters, Katkin American served notice to the division, crushing the field by 14 and one-quarter lengths, stopping the clock in 1:52.3. The time marked a new Hoosier Park track record for sophomore geldings, established in the trotter’s fourth career start. He completed the second-round sweep Friday night with a 1:53 clocking, winning by a whopping 10 lengths and increasing his bankroll to $62,000. Fiftydallarbill skipped the second round while competing on the Grand Circuit in Canada and Pennsylvania.

“It’s unreal. This is the first one I’ve got to work with and drive myself,” Yoder said. “I never would have thought I’ve have a horse like this. I’m surprised. I’m also interested to see how he does against Fiftydallarbill when he comes back.”

Boyd and his family were not on hand at Hoosier Park for the track record performance on June 28, but they made sure to be in attendance for his finals victory Friday night. It was a big day overall for the group. Prior to driving the two and one-half hours from their Jonesville, MI farm to Hoosier Park, the family celebrated as Boyd’s son, Braxten, earned his first winning drive on the Michigan fair circuit. Making only his second start, the young Boyd steered homebred seven-year-old Mach Three stallion Megatron to a 2:08.3 score at Charlotte, MI.

“It was a pretty crazy day,” Boyd said. “We got back home around 2:30 in the morning, but we had plenty to talk about.”

If the success with Katkin American were not enough, the freshman pacing filly Boyd shipped to Yoder could also be a factor in ISS competition this summer. Imonlytellinyaonce has only made one start at Hoosier Park, but she made it a winning effort, taking her Indiana Sires Stakes first round elimination in 1:53. That performance secured a place in next week’s final, and was the second-fastest of four eliminations contested.

“It’s been a dream come true with the trotter,” Boyd said. “The pacing filly is just icing on the cake. We’ve developed a friendship and partnership. It’s been a lot of fun.”

The partnership has helped to turn Katkin American’s potential into on-track accomplishment. Boyd now has a fellow trainer that he can trust to campaign his Indiana-sired interests when needed. And for Yoder, the success of the gelding will go a long way in helping as he strives to forge his identity in harness racing. For all involved, it is shaping up to be a special summer.