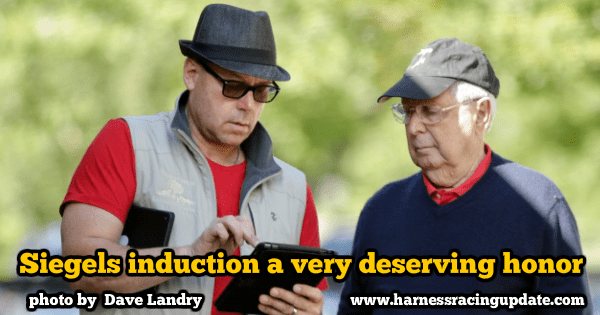 The 90-year-old owner and breeder will be inducted into the Hall of Fame for the award-winning racing empire he built with his late wife Arlene.

Acclaimed breeder and owner Jules Siegel will be inducted into the Harness Racing Hall of Fame Sunday in Goshen, NY.
It will be a fitting tribute to the work he and his late wife, Arlene, put into building Fashion Farms into a powerhouse breeding operation.

Jim Campbell has served as trainer for Siegel’s well-known “Broadway” homebreds and his many yearling purchases for more than 20 years. He’s had a front-row seat as the 90-year-old horseman built his award-winning racing empire.

“I think it’s a well-deserved honor as far as Jules is concerned,” Campbell said when reflecting on their collaboration. “He’s really contributed a lot to harness racing over the years. For someone that’s done all that he’s done and the way that he’s done it, I think it’s a very deserving honor.”

Before all the awards and accolades, Siegel was known more as a pharmacist that owned a chain of several dozen drugstores. When he decided to sell his holdings and retire in 1995, harness racing became his focus. Campbell entered the picture in August 1994, hired by the husband and wife team to condition their growing stable of horses.

“I was stabled at Gaitway and I only had about six horses at the time. I was walking through the paddock one night at The Meadowlands. Jules and Arlene were walking through. They asked me how many horses I was training. I told them six and they said okay and just kept walking,” recalled Campbell. “A couple of days later, Jules walked over to the barn and asked if I would be interested in training his horses. I said absolutely I would be.”

The 1995 season changed everything for the Siegels. Tagliabue, a horse that Jules had picked out himself at the yearling sales, would win the coveted Hambletonian. He would go on to be named Dan Patch Award winner, the first of several. Siegel prides himself in aiming to be the best in breeding horses as well as acquiring top racing stock. His efforts have been rewarded several times. Twice his eastern Pennsylvania-based Fashion Farms has been named Owner of the Year (2002 and 2009). He has campaigned five horses that went on to win eight Dan Patch Awards. Joining Tagliabue are Galleria (two-time winner), Broadway Hall, Broadway Schooner, Possess The Will and Broadway Donna, also a two-time recipient. He has five Breeders Crown victories as an owner, including wins by homebreds Broadway Schooner, also a Hambletonian Oaks champion, and her daughter, Broadway Donna. Broadway Hall, Possess The Will and Real Artist are Siegel-owned horses that have gone on to become successful stallions.

“He aims to have the best. He tries to breed the best. He tries to buy the best, and he wants to race the best. His bottom line is that he wants to race in the top races, he wants to breed good horses, and he’s done that,” Campbell said. “Sometimes it doesn’t work that way. Everything has to go just right to get all of that. The one thing I will say is that Jules has bought a lot of horses that were expensive horses that didn’t fit into that top category. He never complained. I think that’s one of the reasons why our relationship has been so good. He understands the way the business can go and he’s got a very good feel. He’s got his finger on the pulse at all times in this game.”

Jules Siegel has aimed high in his quest for the best. As an owner and breeder that has successfully pursued the sport’s rarified air, he has left an indelible mark on harness racing. Sunday he will join a select group, immortalized for his contributions.