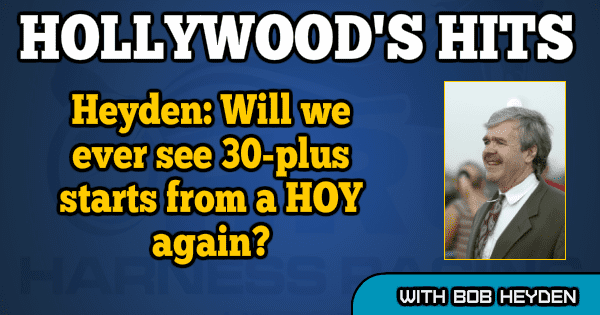 Will we ever see 30-plus starts from a Horse of the Year again?

It’s doubtful we will see 30-plus starts from a Horse of the Year again considering it hasn’t happened in 29 years.

Before Matts Scooter it had been done seven other times:

Kevin Lare, then 18, was winning invitationals in New York and New Jersey for his dad, Big John Lare — one of them in 1:54.4 with Friendly Face. Not many teens were out there battling with the likes of Go Get Lost and Mack Lobell.

Speaking of Mack Lobell, 1988 marked his second straight HOY season and he still is the last male to do this back to back. Moni Maker, the last female, did so in 1998-1999.

Miss Easy, Artsplace and Precious Bunny all were foaled in 1988. It was also the year that a couple of youngsters from the first crop of Hambletonian favorite Baltic Speed stepped onto the track as freshmen — Peace Corps and Valley Victory.

The book on Foiled Again

The two ladies who have sent out Horses Of The Year — Nancy Johansson and Linda Toscano — are celebrating birthdays — Johansson’s birthday was on Saturday and Toscano’s is on Tuesday.

Peter Wrenn recently joined the 10,000-win club. Next up is Brian Sears who is approximately 60 away.