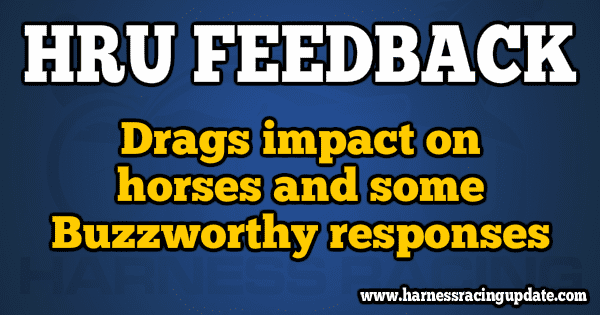 Joe Holloway: What about the horses?

In the article about post time drag and track management’s view of it (full story here), one thing was glaringly omitted, the effect it has on the horses and possible outcome of the race. While I know the post parade is a great part of the presentation, I think it needs to be limited to 10 minutes on the track. With today’s post time drag it is not uncommon for horses to be parading for 14 to 16 minutes. A lot of horses wash out and don’t race near as well when scoring for so long, especially fillies. Is this fair to the bettors, the owners, anyone except management? We need to limit our time to 10 minutes post parades and go when post time arrives, bettors will adjust and bet accordingly.

In response to Garnet Barnsdale’s question “Did the bettors get a fair shake at Monitcello” that appeared in June 15th addition of HRU (full story here), I say, “I can’t believe the question was asked.”

In harness racing, or any form of gambling, luck, good or bad, plays a part in the outcome. In asking the question, he is asking should there be a rule change. Okay, then where do you draw the line?

In this race there were seven horses, all in some way or another were interfered with. The top two got the “best” of it. Mr. Stalbaum’s horse went off stride as it approached the top two but then scattered the other four behind. This all happened before the ½ mile pole. After this, the race continued as normal as the troubled horse pulled up.

Now for a hypothetical seven-horse race. The race starts and the horses line up after the ¼ pole, then the horse laying third breaks scattering the other 4. In 46 years that I’ve been attending races I’ve never seen any part of the wagering refunded. It is regardless if the break was because of bad gait, broken hobble, jumping over a hot dog wrapper (that was back when people attended the races) OR to a lost bridle.

I have seen the starting gate stall and interfere with a horse and that horse’s backers had their money returned. The fair start rule is another that makes sense, but if the race has started and one of the other horses cause interference to another as part of the race, then the rules we have in place today address this adequately. If you can’t take bad luck when gambling, I suggest you don’t gamble.

When I saw the headline regarding a chaotic race at Monticello I was sure it was concerning a race in which three of the six competing horses fell and DNF and the third-place horse was severely impeded. I thought it was a no brainer for “no contest”. To my amazement, they declared the race “official”. When half the field does not finish and one other is affected, it is only fair to the betting public to declare it a “no contest” and refund all moneys bet.

In addition, three owners receive no money for their efforts as no money is paid for DNF. Under a “no contest” ruling all purse money is divided evenly according to NYS Gaming rules. The money refunded will be bet again, but a disgruntled bettor may put his money elsewhere in the future. An owner whose horse is injured by no fault of his own has salt poured into their wounds when they consider they are out paddock money, maybe Lasix money, maybe shipping money, and never got a fair shake. The horse shortage is also a consequence of an owner shortage.