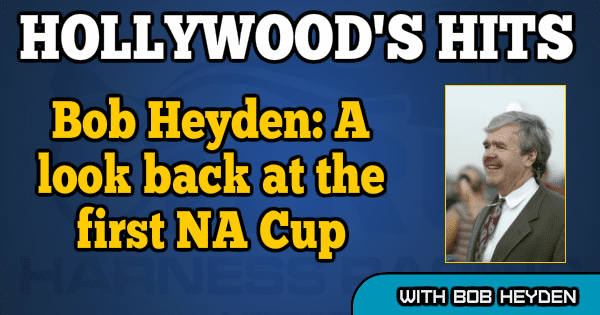 This year marks the 35th anniversary of the Pepsi North America Cup. The first edition was held on July 2, 1984 at Greenwood Raceway and carried $596,500 in total purses with the final going for $357,900.

The “Four-H Club” would have been thrilled with the Year One results. The three elims went to Herve (Filion), (Dr. John) Hayes and (Tom) Harmer with Embrace Me, Legal Notice and Long Fella, respectively.

Hayes won the final with Legal Notice, who held on a neck over Walton Hanover (the defending divisional champion), with Long Fella third.

Legal Notice was a foal of 1981, the year Hayes won the Meadowlands Pace (with Conquered) in his only appearance. He came from ninth to first in the final eighth of a mile.

Hayes also trained Legal Notice and five of the first seven editions of the NA Cup were won by trainer/drivers.

Note, the NA Cup holds the record for the richest race ever held for a three-year-old of either gait. The 2011 NA Cup won by Up The Credit carried a purse of $1.53 million, about $9,000 more than Muscle Hill went for in the 2009 Hambletonian.

Universal impact of the Meadowlands

The Meadowlands truly has had a global impact.

Consider that in the 17 years from 1988 to 2004 not a single U.S.-born conditioner was the track’s leading trainer.

Justify and the Triple Crown

Both harness racing and its counterpart thoroughbred racing have a single horse who finished second in all three Triple Crown legs.

In 1963, Floris was second banana to Speedy Scot in the Yonkers Trot, Hambletonian and the Kentucky Futurity.

In 1978, Alydar was second to Affirmed in the Kentucky Derby the Preakness and the Belmont Stakes.
Buried side by side

At Stoner Creek, the following three horses are buried next to each other, two of them Triple Crown winners, and one of the most influential stallions of all time in either sport.

This year marks the 50th anniversary of two Triple Crowns in one year.

D Wayne Lukas won his first and last Triple Crown race 33 years apart with a win in the Preakness both times — Codex in 1980 and Oxbow in 2013.